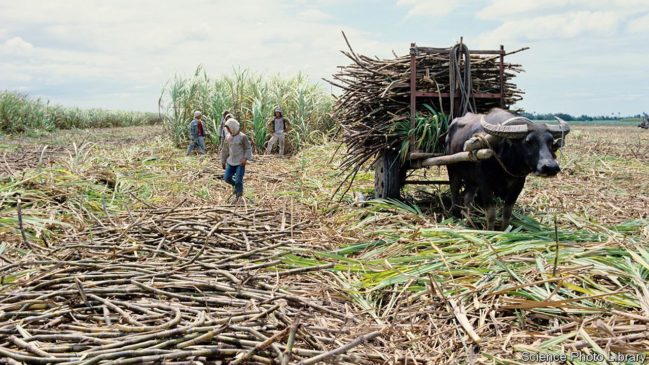 A landowner defines its territory by legal papers, by building “territorial walls” and having armed guards or private armies. He makes an offer to the locals to till the land and produce fruits. He waits until the land will be productive and collects excessive profit from the people who do the actual work. This is not about the parable; this is what’s happening in the Philippines.

In Matthew 21:33-43 we tend to read the parable with God as the landowner, the prophets are the servants who killed by the farmers, and Jesus Christ is the son of the landowner. If we read it again, and challenge our long-time allegory, we see that Jesus was using parables as a means to challenge the status quo. In verse 45, the chief priest and the pharisees were affected by it.

During the time of Jesus the Roman Empire dominated the socio-economic affairs of Jews. The chief priest and pharisees see themselves as powerful figures that has capability to own properties. When Jesus was telling the parable, he asks the people around him, “when the owner of the vineyard comes, what will he do to those tenants?” We can observe that it is easy for the pharisees to answer based on their capabilities – pass the judgement of death to the tenants and gain benefit to other tenants. But Jesus said, “the very stone which the builders rejected has become the head of the cornerstone” followed by “the land will be given to those people who will produce its fruit”. We can say, either the rejected stone was Jesus Christ or, it could be the people who were rejected by system will become the cornerstone or foundation of a totally new structure. Jesus was so wise and dauntless, right?

In our times, even we have millions of human resources and natural resources in agriculture- the productivity of agriculture is shrinking. What do these phenomena really mean? Do services really reflect the needs of agriculture? Senator Cynthia Villar recently said that the rice farmers are not competitive relative to rice farmers in Vietnam and Thailand It is very unfair and insensitive for an incumbent chairperson of Senate Committee on Agriculture to simply put the blame to the farmers. There is so much heavy toil to the farmers with the context of landlessness in the country, land grabbing from big corporations and landlords, inept agricultural facilities, expensive seeds and fertilizer and lack of support from the government- and the gaping inequality that has been happening for years. To add to that, we have a gruesome history of the state killing our farmers, the very people that have kept the land fertile, and have been feeding our people. I think, nowadays, it is really crystal clear to us that our economy is not geared towards a caring economy for the farmers, The Philippines is an agricultural country, and that is a gift that is tied with the land and to those who till the land, and yet the most poor and destitute sector are the farmers. Like the tenants in our reading, the farmers were systematically robbed of land and harvest. The non-repentant landowners that possesses property without working for its fruit, doesn’t contribute to the development of the land.

If we look at our parable from the lens of big land lords, it is easy to say that the farmers are wicked and ungrateful, and the landowner who doesn’t work for the land deserves mercy. But the God that I know is not passive. The God I know is here. God is working among us. He cries with us. He comforts us. He never abandons his creation. The God I know works with the farmers who work hard to keep land fertile and productive. God is with them during planting season, during harvest time, and celebrates with them, and blesses them every time the land produces a sprout, a fruit, a produce so that life may be shared, and others may live. We should thank our farmers for that.

Jesus said in verse 43 “Therefore I tell you that the kin(g)dom of God will be taken away from you and given to a people who will produce its fruit.” And the kingdom of God is a place where people work for what they need and exploit no one. May this parable remind us that the excessive wealth of the few spells death to many. The cornerstone of the society of what Jesus’ was saying was from the “rejected”. It is built from the very people who work long and hard hours, and yet was deprived of land. Also those people who are robbed of humane job, social services education, for a life with dignity and peace by big land owners and capitalists.

May this text remind us and remold us see the radical teachings of Jesus, that the people in the margins, those who work hard, till the land and build nations and feed the people– our farmers and workers, are not only the cornerstone of our society but are the very backbone of every nation. And that the kingdom of heaven belongs to those who toil.

May the Holy Spirit disturb us all! Amen.