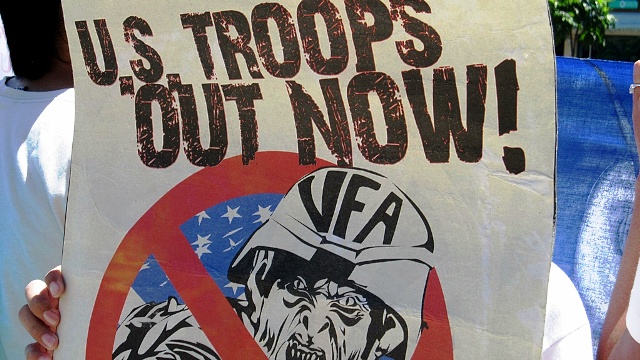 MANILA – A progressive group said the termination of the Visiting Forces Agreement is “just and necessary,” following President Rodrigo Duterte’s order to issue a notice of termination to the US government.

“The termination of the VFA is just and necessary. It is long overdue. The VFA is an affront to Philippine sovereignty. It is a reminder of our status as a US neocolony,” said Bayan secretary general Renato Reyes.

Duterte recently warned of terminating VFA, following what he regarded as meddling of the country’s affairs as the US government recently passed a budget banning officials involved in the jailing of Sen. Leila de Lima. This included former police chief now Sen. Ronald Dela Rosa, whose US visa was reportedly cancelled.

A similar statement has been released last week by Presidential spokesman Salvador Panelo. This, however, was referred to as “fake news” by fellow cabinet official, Defense secretary Delfin Lorenzana.

Today, Foreign Affairs secretary Teodoro Locsin Jr., who is also against the termination of the said military accord, was instructed to sign and send the notice despite the president’s own pronouncement that no less than US President Donald Trump has been trying to “save” VFA.

Read: 10 Years On, VFA Only Served US Interests

Reyes said the transmission of the notice of termination has set the process in motion, with 180 days to be considered effective.

“During this 180-day transition period, the Filipino people must remain vigilant against any reversal by the Philippine Government or any intervention by the US government,” he said.

Among the implications once the VFA’s termination is effective is that “all US troops in the Philippines will be subject to Philippine laws and all their special privileges will be gone.”

“They can no longer enjoy any privilege other than those accorded regular tourists. The US troops can no longer overstay in the country (beyond 30 days) without any visa, even in the name of security,” Reyes said.

As such, war games between US and Philippine military forces will be scrapped.

The Enhanced Defense Cooperation Agreement, signed under President Benigno S. Aquino III, can no longer be implemented. Reyes said this requires presence of US troops.

One of the implications of the VFA termination, Reyes noted, is that US soldiers accused of committing crimes will now “be immediately placed under Philippine jurisdiction and detained in Philippine facilities.”

Read: Edca: a tale of secrecy, murder and betrayal

Such provision earlier became controversial, following the rape of Filipina “Nicole” and the murder of Jennifer Laude.

Reyes warned that in the next 180 days, the US government may either retalliate or renegotiate with Duterte. Still, he added that the “contradictions between Manila and Washington may intensify.”

He said, “on this point we need to also be vigilant and continue to press for the abrogation of all unequal military agreements including the MDT and EDCA.”