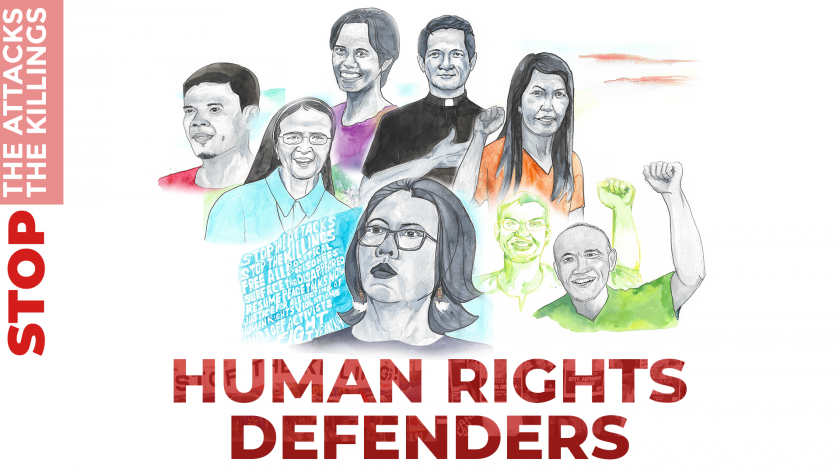 Bulatlat is publishing a series of reports, featuring human rights defenders under siege.

Two weeks ago, Fr. Wilfredo Ruazol of the Iglesia Filipina Independiente received a rather bittersweet news.

The perjury case against him and other human rights defenders filed by National Security Adviser Hermogenes Esperon Jr. before a Quezon City court was dismissed. All except for Sr. Elenita Belardo, former national coordinator of the Rural Missionaries of the Philippines.

The case supposedly stemmed from the protection order that human rights defenders and church workers asked from the Supreme Court, following the rampant red-tagging by state security forces. This, Karapatan Secretary General Cristina Palabay said, was a retaliation designed to harass these organizations.

Ruazol found himself pushed to the fore for “finding meaning in the work we have doing for the realization of human dignity and living out the imperative of Christian life as an Aglipayan priest that has a strong tradition of ministry for the poor, the deprived, and oppressed.” (Click here to read the rest of the story)

How service to the poor filled the void in Sr. Elen’s heart

At 80 years old, there seems to be no slowing down for Sr. Elenita Belardo of the Religious of Good Shepherd.

Sr. Elen grew up in a comfortable life – with their family owning a big land estate in Silang, Cavite, a province south of Manila. In fact, her first taste on the issue of social justice was when her family faced an agrarian dispute with their tenants.

Their family, after several failed negotiations, decided in the end to sell the estate to rid themselves of the proverbial headache – her father had told them that the tenants have “taken advantages” of their leniency in handling their agrarian affairs.Little did she know that she will have more encounters with agrarian disputes later in life.

Years later, however, Sr. Ellen as a nun would be active in helping farmers in their campaign for their right to land. Her tireless support for farmers has led her to several challenges in her life. But her resolve has never faltered. (Click here to read the rest of the story)

“He was asking where I live and said all the worst possible things that he/they will do to me,” Tinay, as most her colleagues call her, said. The same person, who used the number 09275704471, sent her text messages calling her names such as “garbage,” “prostitute dreamer,” among others.

Last year, Tinay also received a phone call from a man who accused her of being involved in the alleged ambush of June 19, 2017 of the Presidential Security Group by members of the New People’s Army (NPA) in Mindanao. The caller also repeatedly asked about Palabay’s whereabouts, and warned her to be careful because he would soon meet her.

After searching the caller’s cellphone number (+639260779448 ), it appeared that the number belongs to a member of the Armed Forces of the Philippines Safety Battalion.

Such threats no longer surprise the 40-year-old rights advocate. President Rodrigo Duterte himself publicly expressed disdain for those who stand up for human rights, even encouraging state agents to go after Karapatan members. (Click here to read the rest of the story)

Human rights work as a vocation

School activities and birthdays are important activities that any parent will surely not miss, but 42-year old mother Jackie Valencia usually missed these moments with her children as she attends to an important job that not everyone has the courage and heart to do so.

Valencia, a human rights worker of Karapatan in Cagayan Valley, said her 12-year old twins understand why she missed some of the events as she explains to them the nature of her work. She said her twins knew the danger of her work and would often worries them when she would have to respond to the call of duty.

Even when the culture of impunity is intense in the country and laws are being weaponized for use against dissenters, human rights workers like her, she said, will not turn her back on human rights work. (Click here to read the rest of the story)