You Are Here: Home → 2019 → November → 25 → Regent workers share stories of unjust labor conditions over a bowl of champorado

The labor violations experienced by the workers include 14-hour shifts without overtime pay, contractualization, union busting, among others. While the workers celebrate the release of the Regent 23 through the help of Pasig Mayor Vico Sotto, RFWU has been mired in debt for payment of bail amounting to P300,000 (US $5,890).

MANILA – Cultural workers spearheaded a gathering last Saturday afternoon, November 23, to widen the network of support for Regent workers on strike. Organized by the Concerned Artists of the Philippines (CAP), Gantala Press, Artists in BPO Unite for Social Change (AUX), Me & My Veg Mouth, and Defend Job Philippines, the two-part event dubbed as Defend the Picketline III serves as a fundraiser for the Regent Food Workers Union (RFWU) legal fund for court proceedings, the filing of counter charges, and medical expenses for the injuries sustained in the brutal dispersal last November 9.

“Kami na ang sinaktan, kami na ang pinerwisyo ng dalawang dekada, kami pa ang masama,” (They’re trying to make it appear that we are the ones at fault when we have been maltreated for two decades.) Tita Cudiamat, president of the RFWU said. Workers became emotional in narrating the inhumane treatment by Regent management which worsened after they decided to organize a union. The labor violations experienced by the workers include 14-hour shifts without overtime pay, contractualization, union busting, among others. While the workers celebrate the release of the Regent 23 through the help of Pasig Mayor Vico Sotto, RFWU has been mired in debt for payment of bail amounting to P300,000 (US $5,890).

The dismantling of RFWU’s picketlines in Pasig City and Taguig City by security forces including the Philippine National Police and hired goons has prevented the strike’s goal to cripple the management’s profit to pressure legal negotiations. Unionists decried insulting actions of Regent owners Susan and Ricky See while refusing to hear their demands for regularization, higher wages, and benefits. Cudiamat told how Susan See was seen throwing a five-peso coin at the picketline while Ricky See resorted to profanity. “Bubuksan ang bintana ng kotse para mamakyu,” (He rolled down the car window to give us the finger.) Cudiamat shared.

Tatay Rolly, contractual worker for 26 years, narrated the hardships he did for the company which remain uncompensated. He carried tons of sacks of corn, rice, and cassava and loaded them into machines. “May araw na hindi na kami nakakapag-almusal,” (There were days we skipped breakfast.) he said.

Support for the #RegentStrike has dwindled after media corporations decide to keep mum on the issue as Regent buys commercial time for advertisements. 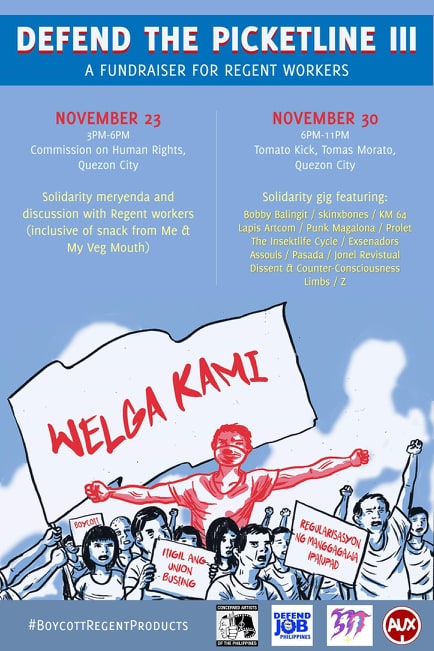 Meanwhile, vegan champorado was served made from organic ingredients provided by Masipag farmers in Pangasinan. “Inextricable from food is the labor that makes it. It’s banal to point this out but the times we are in demand that it be asserted and that we do not take this for granted. Farmers are being killed and factory workers arrested on false charges as they fight for their right to decent wages, humane work conditions, and land to call their own,” a statement from Me & My Veg Mouth’s Facebook page said.

Danny Fabella of Musikang Bayan also performed songs in solidarity with the workers.

“Ironically, even if our country produces a lot of agricultural crops and local snacks for public consumption for decades already, the very workers comprising the labor forces of these industries are the ones who live in so much precariousness. Most have no assurance of long-term or sustainable employment for their families. We invite more artists and cultural workers to support the struggle of the RFWU for regular jobs and better wages and working conditions. We also have so much to learn from the workers’ resolve to fight for our common interests, including job security and better working conditions,” Lisa Ito, secretary general of CAP said.