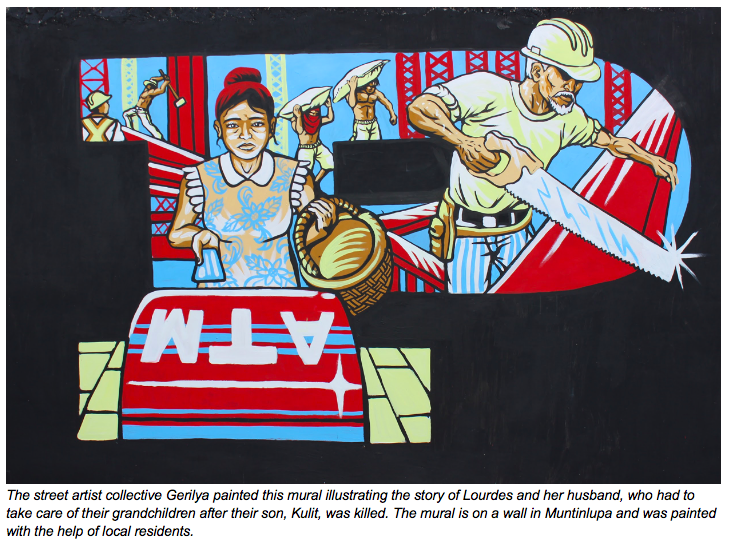 The 4Ps program was supposed to provide youths like Eugene the opportunity to fulfill their dreams and help lift their families from poverty. But another government program, the antidrug campaign, has dimmed those hopes.

Written by Mixkaela Villalon
Funded by the PCIJ Story Project
Reposted by   Bulatlat.com

This is a two-part report. Read the first one here.

MANILA — Three years ago, Lourdes, a 58-year-old-grandmother in Mandaluyong, became the sole caregiver and provider for three grandchildren after her son, “Kulit,” 34, was killed by gunmen wearing bonnets and helmets.

Kulit had been in trouble with the law before. He had spent nearly 15 years in jail for a homicide his mother said he didn’t commit but took the fall for. After his release, he could barely make ends meet from the money he made from repairing electronics and so he went into the drug trade, his mother said.

Lourdes is one of many grandmothers who have been forced to care for the families of their sons who perished in the war on drugs. She did not want her real name published for fear of her grandchildren’s safety.

PCIJ research on nearly 2,000 drug war casualties shows that the typical victim is male, aged 30-35 years old, and the family’s main breadwinner. With their deaths, the burden of providing for their families falls on widows and, more often than not, the paternal grandmothers.

PCIJ’s research focused on families that have been getting cash assistance as part of the government’s centerpiece antipoverty program known as 4Ps, available to the poorest 20 percent of Filipinos. Many drug-war families are in danger of dropping out of 4Ps if they are unable to meet the requirements of keeping school-age children in school.

Lourdes has accepted that she will have to provide for her orphaned grandchildren, but like many grandparents forced to deal with the consequences of their sons’ deaths, she was not prepared to take on this additional burden. While he was in jail, Kulit had provided for his children from the money he made selling food to the other prisoners. Without Kulit, Lourdes’s 60-year-old husband, a mason, is now the only wage-earner in their extended family. Three other jobless children already live with Lourdes as do seven other grandchildren.

Lourdes’s family is among the 4.4 million Filipino families who get assistance from the 4Ps conditional cash transfer program.  Like similar programs in Brazil and Mexico, this money is intended to make sure poor children are fed, cared for, and stay in school.

To receive the full amount of the cash grant – P300 monthly for elementary and P500 for each high school student – children must attend 85 percent of their classes. Some 12 million children are in school today thanks to 4Ps. Many of them will be the first in their families to complete secondary education and as a result have better chances of finding employment or getting a college education.

President Duterte supports the 4Ps program. In 2017, staying true to his campaign promise, he provided each 4Ps family an additional P600 as rice subsidy.  In addition, in 2018, the government increased cash transfers for each 4Ps family by P200 in order to mitigate the impact of higher prices brought about by the Tax Reform for Acceleration and Inclusion (TRAIN) law.

Despite these increases, the benefits provided by 4Ps to poor families that have fallen victim to the war on drugs have been outweighed by fear, insecurity, and the loss of their breadwinners.
Even before the drug war, these families lived in communities that were already vulnerable to multiple economic shocks such as illnesses, flooding, fires, and demolitions. The death of their loved ones becomes one more blow that lessens their odds of escaping from an intergenerational cycle of poverty. 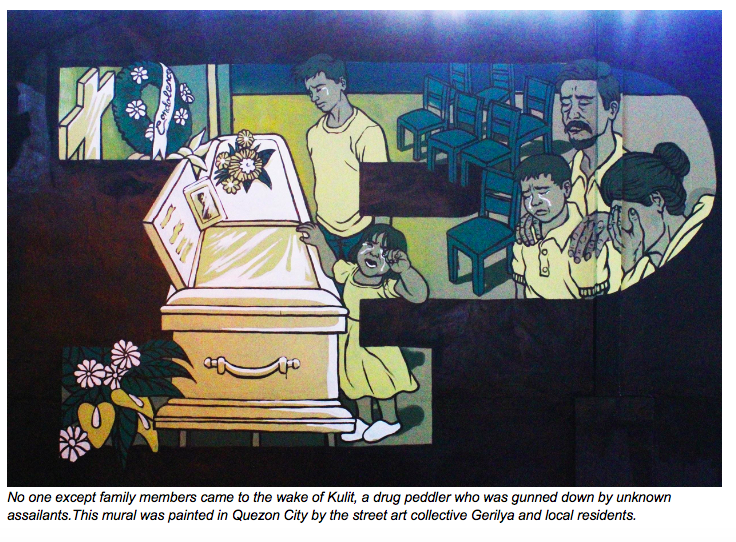 No one came to the wake

No one came to Kulit’s wake, even if in life, Kulit was well-liked. He was no saint, but he looked out for his friends and family. He was ready to help friends in dire straits when he had money. When the drug war began, Kulit surrendered to the police headquarters in Camp Crame and admitted he was a drug user.  He was pushed into the drug trade, his mother said, because the family house had been gutted by a fire and needed to be rebuilt. He also wanted to raise money so Lourdes could get an operation to remove her cataracts.
Lourdes recalled that just weeks before he died, Kulit pointed to the concrete houses on their street.”There’s only one reason why all those houses have been built,” he said.

It was an open secret in their community: Drugs are an easy way to make money. By risking possible death to be part of the illegal trade, Kulit hoped to better his and his family’s life. “We will have no home to sleep in if I don’t do this,” he told Lourdes. It was dangerous, but the alternative was to continue toiling with no hope of a better life. Grudgingly, Lourdes gave her blessing.

With just P500 capital, Kulit soon earned several thousand pesos more. He gave the money to Lourdes and told her to buy cement to begin construction on their house. A week later, Kulit slept at a friend’s home and woke up early to eat breakfast at a nearby goto stall. His friend had been restless the whole night, checking if Kulit was really asleep. Not long after Kulit left to get breakfast, he was shot and killed by unknown gunmen at the goto stall. His neighbors and family believe the friend had tipped him off to the authorities.

Lourdes was just streets away when a neighbor told her that her son had been gunned down. She hurried to where he was, and even crossed paths with the friend whom they suspected of informing on Kulit. By the time Lourdes arrived at the crime scene, her son’s body was already being taken away by Scene of the Crime Operatives.

Lourdes still remembers being told by the Scene of the Crime Operatives that she needed to pay P45,000 so she can bury her son. “You killed him and now I have to beg for money so I can claim his body? Have you no shame?”

Picking up the pieces 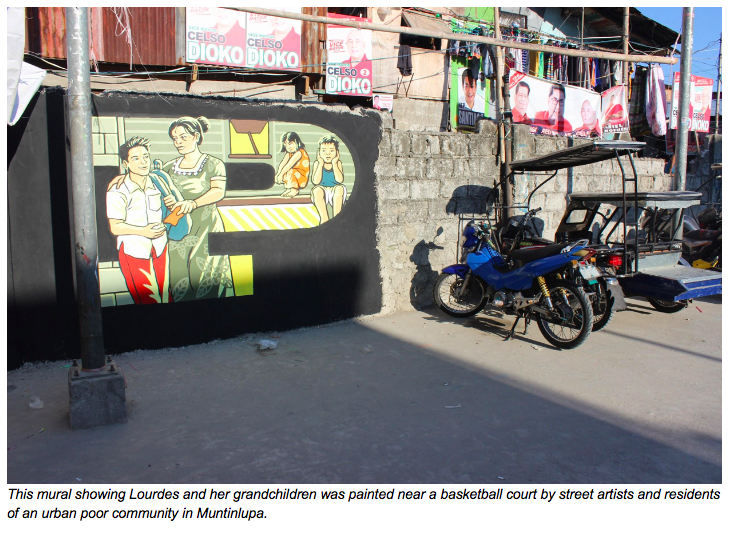 After Kulit’s death, Lourdes took care of his three boys, aged 18, 15, and 16, adding to the other grandchildren who were already living with her. With 10 grandchildren under her roof, buying enough food or medicine is a constant challenge. The only wage earner in their household is her husband, who earns P500 a day when there is work available. When her husband has no work, Lourdes relies on what she can still get from the 4Ps.

Even with money from 4Ps, Lourdes cannot afford to send all three of Kulit��s children to school. While 4Ps covers most educational needs, it is not enough to pay for transportation, food, school supplies, uniforms, and other expenses.

So Lourdes had to make a choice. Kulit’s two youngest children would drop out, even if that meant not being able to claim more money from 4Ps. No matter how she added up the numbers, there was simply no way to send everyone to school, even with 4Ps aid.

Instead, Lourdes decided to invest the family’s remaining resources in Eugene, Kulit’s eldest. At 18 years old, he is in Grade 8, four years shy of a high school degree. She hopes he would finish his schooling, find a good job, and help lighten the family’s load.

Depending on whether Eugene is meeting the conditionalities of school attendance and if Lourdes meets the conditionalities of the health grants, the family receives between P1,300 to P1,800 per month. They get P500 for a child attending high school, P500 more in health grants if Lourdes attends the Family Development Sessions, a P600-rice subsidy, and P200 in an unconditional cash transfer.

The 4Ps health grants require that mothers attend the Family Development Sessions (FDS) where they cover topics such as financial literacy and responsible parenthood. Families with infants and children younger than two years old are required to attend monthly checkups and be up to date with immunizations. The FDS is means to monitor the progress of 4Ps recipients while also fostering friendship and a sense of community.

While accepting her new role as her grandchildren’s primary caregiver, Lourdes can barely make ends meet. “My grandchildren eat a lot because they’re growing boys. Two kilos of rice per meal is not enough. Sometimes I tell them not to eat too much! We can’t afford to buy more rice!” 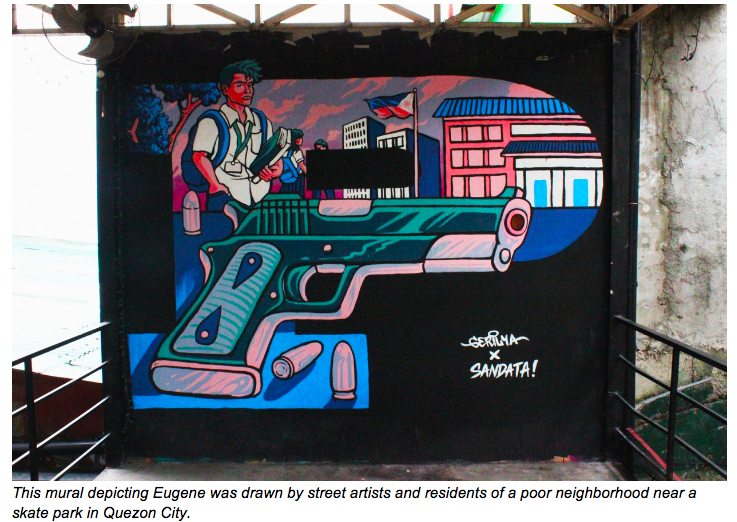 Eugene used to dream of becoming a policeman.

But after his father was killed, Eugene lost faith in the police and the justice system. He is angry about what was done to Kulit but feels powerless to do anything.

As the eldest and closest to graduation, the family’s survival rests on Eugene’s shoulders. The teenager juggles his family’s hopes and his schooling with a constant fear that what happened to Kulit can happen to any of them. Instead of focusing on his studies, Eugene is constantly preoccupied with trying to keep his family safe.

Lourdes describes a recent exchange with her grandson: “The eldest, that’s what he wants, to be a policeman when he grows up. I told him he should study hard so he can achieve his dream. He says he’s a big boy now, that he can go head-to-head [with his father’s killers]. That he’s saving up his school money, bit by bit, so he can buy a gun. That’s what he said, ma’am. So we can have something to fight back with.”

The 4Ps program was supposed to provide youths like Eugene the opportunity to fulfill their dreams and help lift their families from poverty. But another government program, the antidrug campaign, has dimmed those hopes.

The Department of Social Welfare and Development has so far not responded to our questions about the drug war’s impact on 4Ps families, including how the government intends to address the effects of the killings on children and families left behind.

“The 4Ps is designed to provide long term stable support for poor families to ensure that their children are educated and healthy,” the World Bank, a donor to the 4Ps program, said in response to the findings of our research. “The needs of families with heightened vulnerability, including death of a family member, can be addressed by programs specifically designed for this purpose.” — PCIJ, October 2019/ Reposted by