The hundreds of thousands of LRT-2 commuters affected by the shutdown are at the mercy of, to the say the least, an inefficient government agency and its inept private contractors that profit millions of pesos in taxpayers’ and commuters’ money.

MANILA – Presidential mouthpiece Salvador Panelo took the challenge to commute. The dare arose from his callous remark about the state of the metro’s transport system. There’s no crisis he said, since people are still able to go wherever they need to. Enduring the daily torment of long queues and endless waits, overcrowding and hellish traffic, the commuting public are of course outraged.

But Panelo’s four-hour, four-jeepney commute circus should not distract us from the fundamental issues. The ordinary working class and students who bear the torture of commuting do not need him to validate what they suffer every day.

The crisis in the mass transport system is not only real. It is chronic and structural. It did not start when the LRT-2 suspended its operations as the usual glitches hampered the LRT-1 and MRT-3. For as long as we can remember, one or two of Metro Manila’s rail lines break down on an almost weekly basis.

To be sure, the Duterte administration is not solely to blame for the recurrent glitches, passenger offloading and shutdowns of Metro Manila’s rail system. Such decrepit state of the rail system was spawned by decades of accumulated wrong government policies, neglect and corruption. Technical glitches number to thousands per year, according to transport officials.

These train malfunctions started to occur with increasing frequency under the previous administrations of Arroyo and Aquino, and the crisis continues its cumulative deterioration under Duterte. Before these recent incidents, LRT-2 is not as notorious as LRT-1 and more especially MRT-3 in terms of service interruptions.

LRT-2 had several mishaps prior to the October 4 fire that brought its entire line to a halt for several days. Last May 18, two of its trains collided and injured 34 people. It was perhaps the second worst accident involving metro rails, just behind the wayward MRT-3 train that rammed through a station and hurt 38 people back in 2014.

The LRT-2 collision happened two days after a lightning hit the train line’s overhead power connection. Unable to operate, the incident stranded thousands of LRT-2 commuters in the middle of a thunderstorm.

It seemed that the recent major breakdown of the LRT-2, which will take a possible six to nine months to be fully restored, was bound to happen. This noticeable increased frequency in its system’s malfunctions is affirmed by the rail line’s declining performance indicators. From an average of 11 trainsets running during peak hours in 2014 and 2015, the number fell to 10 in 2016 and 2017, and further to just eight in 2018 and seven trainsets in 2019. LRT-2’s farebox ratio – or the proportion of fare revenues to total operation and maintenance (O&M) costs – is falling as well. A farebox ratio of 1.00 means that fare revenues cover 100 percent of O&M cost. In the first five months of this year, the farebox ratio is down to 0.81 from 1.53 when Duterte assumed office in 2016. 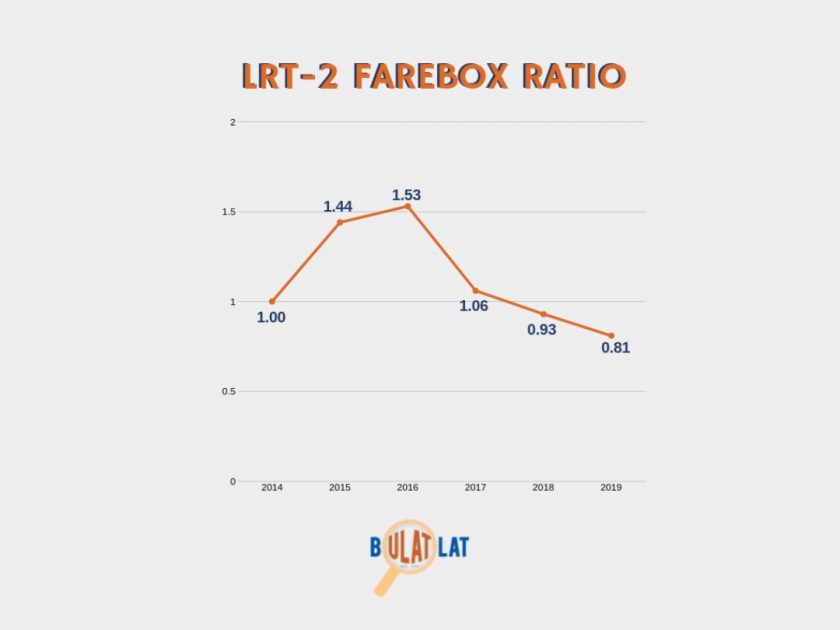 The train line operated by the Light Rail Transport Authority (LRTA) has been obviously poorly managed and maintained.

One reason is that already limited public resources allocated for the system’s improvement are not properly being used. In its 2018 audit report on the LRTA, the Commission on Audit (COA) said that a portion of state subsidy for the rehabilitation of LRT-2 as well as for general administration and support “was not utilized in accordance with its intended purpose”.

Through a Special Allotment Release Order (SARO) on June 17, 2016, the LRTA received P743.56 million from the national government. However, state auditors found out almost half of that amount – P360 million – was transferred to LRTA accounts not related to the purpose of the SARO (i.e., LRT-2 rehabilitation and administration and support).

“Questionable and doubtful”, according to COA, was the transfer of P210 million in rehabilitation and restoration funds of LRT-2 to fill the liabilities of the LRTA in a bank account held in trust for bid documents, bonds and retention.

Likewise, state auditors noted the transfer of P150 million in LRT-2 rehabilitation and restoration funds to a savings account that holds LRTA’s revenues from magnetic ticket sales. It was used as partial payment, interest charges and taxes for an outstanding loan arising from the services rendered by a private contractor with LRT-1.

In its report, released just last June 2019, COA asked the LRTA management to “discontinue using the subsidy funds earmarked for specific purposes and strictly comply with EO (Executive Order) 292 on the use of subsidy fund.” EO 292 refers to the Administrative Code of 1987.

COA also told the government rail agency to “replace the amount taken from the subsidy fund of Rehabilitation of LRT Line 2 System and General Administration and Support”. Further, state auditors asked the LRTA management to submit an explanation on the questionable transfer of P210 million to bank accounts not meant for LRT-2 rehabilitation.

Not only is the LRTA mismanaging the funds intended to improve the condition of and services provided by the LRT-2 system. It also continues to make deals with long-time LRTA private contractors that have a questionable track record.

APT Global has figured in several cases of problematic contracts involving Metro Manila’s rail systems. As the MRT-3 maintenance provider, APT Global was ordered by the COA in 2015 to pay P211 million for failing to deliver its contractual obligations. Among others, they included failure to deliver trains, defective escalators and elevators and half line operations.

APT Global was also part of the TSPA joint venture (along with Telefonika, STIV and Pacific) that maintained LRT-2 from June 2007 to June 2012. In its 2016 Special Audit Report on the LRTA, COA said that TSPA committed a minimum of 16 trainsets running on LRT-2 but only delivered 13 trainsets. Despite this, LRTA still paid its contract with TSPA in full, worth almost P1.06 billion, instead of making the necessary cost reduction.

With such an undesirable track record, it is perplexing how APT Global was still able to be part of a joint venture that currently maintains the LRT-2. Apparently, it is one of the favored contractors by those in the LRTA.

The bidding conducted by the LRTA for the procurement for maintenance of the LRT-2 system won by APT Global’s joint venture AMSCO was allegedly fraught with irregularities. Commuter groups RILES Network and United Filipino Consumers and Commuters filed a case before the Ombdusman against LRTA officials last April 2019.

They alleged, among others, that the LRTA designed the bidding process in a way that ensures only AMSCO will bag the contract. It included requiring the use of spare parts that AMSCO’s MultiScan is the exclusive distributor of in the Philippines. Like APT Global, MultiScan is a longtime contractor of LRTA as a supplier of spare parts and consumables of the LRT-2 system in the past two decades.

In other words, the hundreds of thousands of LRT-2 commuters affected by the shutdown are at the mercy of, to the say the least, an inefficient government agency and its inept private contractors that profit millions of pesos in taxpayers’ and commuters’ money.

With the kind of track record that those handling the LRT-2 have, no wonder that the rail system broke down the way it did. It is also not surprising that the damages caused by the fire could supposedly take months to repair, aggravating the already unbearable state of public commute in Metro Manila.

The public sector should continue to operate the LRT-2 as a provider of a vital public service. The transportation department’s plan to privatize its operation and maintenance will only worsen the woes of commuters and further drain public resources as evidenced by our experience in LRT-1 and MRT-3.

But obviously, the current LRTA has been mismanaging the LRT-2 system. Reforms must be put in place to address this, including structural changes that would allow greater public scrutiny of and participation in the rail agency’s operations. Private contractors that have repeatedly failed to deliver should be banned and held to account. Using the crisis to justify the failed and flawed privatization must be opposed.

These are actually small reforms compared to the massive extent of Metro Manila’s transport crisis, but necessary reforms nonetheless to ensure that the LRT-2 becomes a truly publicly run rail system meant to serve the commuters’ interests and welfare.

Is the Duterte administration capable of instituting these reforms to start addressing the crisis? That’s the real challenge to Panelo and his boss.