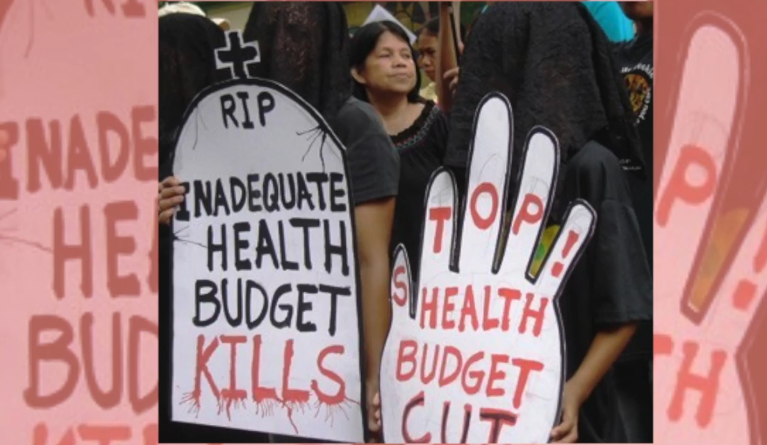 The Department of Health is set to get a whopping P9.39-billion budget cut under the proposed 2020 budget.

MANILA – Health services for majority of Filipino households are likely to remain wanting with the meager budget allocation it will receive next year.

The Department of Health is set to get a whopping P9.39 billion budget cut under the proposed 2020 budget.

Sadly, the sorry state of government-run hospitals is not entirely new, with most Filipinos expecting the worst when seeking medical help. Long queues, poor ventilation, and dilapidated facilities are among the familiar sights that are sadly considered “normal.”

The worst part, however, is the fact that such scenario may have been prevented if not totally eradicated should the government decide to put their money where their mouth is – providing due social services to the poor.

The huge cut in health budget is even more unacceptable with the proposed allocation of P100 million per lawmaker in the country’s House of Representatives. The proposed lump sum budget to be allocated for each lawmaker came under fire yesterday, Sept. 19, just as deliberations on the proposed 2020 budget were ongoing – denying that the allocations are anything but “pork barrel,” which the Supreme Court had declared unconstitutional in its 2013 ruling.

“It used to be called ‘entitlement.’ Now it is called ‘allocation.’ No matter what you call it, it clearly reeks of pork barrel, which is illegal,” said Bayan secretary general Renato Reyes Jr. in his Facebook post, adding that it will surely become a source of corruption.

Year in and year out, government-run hospitals face continuing budget cuts and zero funds for its capital outlay, a meager portion of the Philippine legislated budget that is spent on infrastructure and facilities.

The proposed budget this year is no different – a glaring, long blank space may be found under the “Capital Outlay” for items indicating budget allotment for government-run hospitals – all except for one hospital in Cebu. These government-run hospitals cater to the poorest of the poor who are unable to afford rising medical costs in the country that is considered as the second most expensive in Southeast Asia, according to the Mercer Marsh Benefits 2019 Medical Trends Around the World report.

The budget cuts came in just as President Rodrigo Duterte is set to implement its Universal Health Care, which was signed into law this year. However, Dr. Edelina de la Paz, Health Alliance for Democracy (HEAD) chairperson, said this will be rendered ineffective if public hospitals have no doctors, medicines, and laboratory equipment.

“Worse, UHC/Philhealth is irrelevant if there are no public hospitals and health facilities available and accessible to poor Filipinos at all. UHC is a law that facilitates the further privatization and commercialization of health services,” Dr. Dela Paz added.

In some hospitals, when supplies are scarce, health workers dig from their rather shallow pockets as they cough up funds to buy medical supplies, which they donate to indigent patients.

The Department of Public Works and Highways, under the proposed 2020 budget submitted by the DBM, is set to receive an 18-percent increase – from P454 billion to PP533 billion.

Excluding the controversial infrastructure deals with China, the budget allocated for the preventive maintenance and rehabilitation of primary, secondary, and tertiary roads is 77 percent higher than the total budget for government-run hospitals in Metro Manila.

Dr. Joshua San Pedro of the Coalition of the People’s Right to Health said, “it seems that the focus of the government is on grandiose and profitable structures of infrastructure rather than ensuring public access to health and other forms of welfare.”

On its face, government-run hospitals will seemingly get an increase, ranging from a three to 40-percent increase. However, a closer look at the proposed budget submitted by the Department of Budget and Management to the House of Representatives revealed that this is due to increase in both Personnel Services and its Maintenance and Other Operating Services. 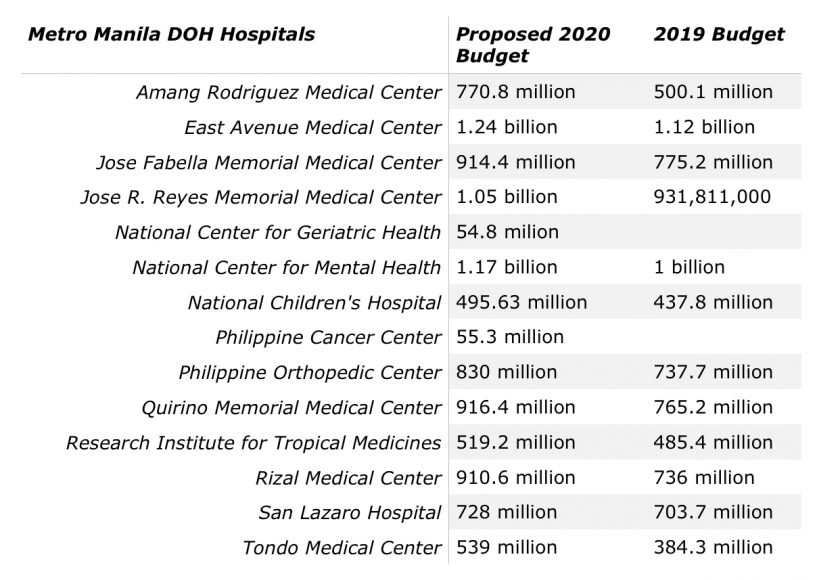 The same sentiment was aired during the budget deliberations last year, where budget for direct health services was slashed up to P1.5 billion.

This year, for one, the Philippine General Hospital, the country’s premier government hospital, is set to suffer a budget cut from P3.22 billion to P2.78 billion this year, per the proposed DBM budget.

HEAD noted the lack if not absence of government-run facilities, forcing indigent Filipino patients to shell out money to pay for health-related expenses.

Much like the P100-million allocation for lawmakers, health rights advocates said that the corruption-ridden PhilHealth should also have no role in the country’s health care system, finding it “heartbreaking” that its officials and their cohorts are milking millions of public funds instead of providing even the most basic health services to the people.

For its maintenance and other operating expenses, at least P67.35 billion is set to be allocated as subsidy for direct health services.

However, under the Universal Health Care Law, the government will supposedly provide free and comprehensive health services through the PhilHealth.