By RAYMUND B. VILLANUEVA
Kodao Productions

Bishop Gerardo Alminaza of the Diocese of San Carlos issued another pastoral appeal asking the people of Negros Oriental to pray with him following the murder of four more civilians early Saturday morning.

In his third pastoral letter this week, Bishop Alminaza issued an urgent call to prayer and action to end the killings in Negros Island via an oratio imperata. An oratio imperata is a short Roman Catholic invocative prayer a bishop issues in times of grave need and calamities.

“Heavenly Father, the source of life and foundation of peace, we your children mourn, worry, and are anxious because of the successive murders of our brothers and sisters.

Give us the strength to fight evil with good, and to reject crooked ways. Protect us from the lies of the devil, and free our country from the power of Satan. We ask this through Christ our Lord. Amen.”

Alminaza’s appeal came after four more executions within his diocese were reported by human rights organizations. 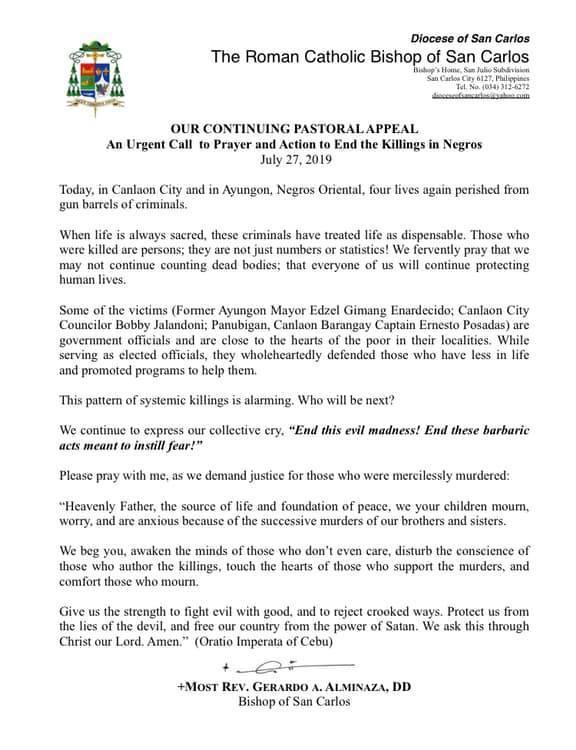 “Today, in Canlaon City and in Ayungon, Negros Oriental, four lives again perished from gun barrels of criminals. When life is always sacred, these criminals have treated life as dispensable,” the prelate said.

Former Ayungon Mayor Edcel Enardecido and his cousin Leo Enardecido were killed around 2:30 a.m. while Canlaon City Councilor Bobby Jalandoni and Barangay Panubigan Chairperson Ernesto Posadas were killed separately, bringing to at least 21 the deaths from a wave of violence that has swept the province of Negros Oriental since a week ago.

Alminaza said three of the latest victims were government officials close to the hearts of the poor in their localities.

“While serving as elected officials, they wholeheartedly defended those who have less in life and promoted programs to help them,” Alminaza said.

“Those who were killed are persons; they are not just numbers or statistics! We fervently pray that we may not continue counting dead bodies; that every one of us will continue protecting human lives,” he added.

The prelate said the “pattern of systemic killings” is alarming.

Alminaza condemned Trinidad’s murder and the wounding of his wife and called for the resumption of the peace process between the Duterte government and the National Democratic Front of the Philippines as a way to stop the attacks on civilians alleged to be supporters of the Communist Party of the Philippines.

After the killing of three more civilians last Thursday, July 24, an angered Alminaza issued his second pastoral letter last Friday calling for the ringing of church bells around his diocese at eight o’clock every evening starting Sunday.

Before that day ended, however, four more were killed, bringing to seven the number of civilians murdered last Thursday.

“In anger and in a call for justice, in a spirit of communion and in a collective prayer, we exhort our parishes, mission stations and religious houses to ring our church bells every 8PM starting this July 28, 2019 (Sunday) until the killings stop,” Alminaza said in his second pastoral appeal.

“Let the toiling of bells remind us that the senseless killings are inhuman. Let the tolling of the church bells call us to a collective prayer, for us to beg God to touch the hearts of perpetrators, as we call on responsible government agencies to effectively address the series of deaths,” the prelate added.

Alminaza’s second pastoral appeal exhorted the government to act on ending the killings.Reposted by