“He has not been pro-Filipino in his relations with US and China, not just in military affairs but even in the country’s economic affairs.”

MANILA – At the onset of President Rodrigo Duterte’s term, his foreign policy has been among the most talked about, with his promise to pursue an independent foreign policy even to the extent of declaring an intention to put a stop to US military presence in the country.

On one hand, Duterte is invoking the Mutual Defense Treaty with the US government, asking the latter to go into war with China. On the other hand, however, he has made a so-called “verbal agreement” with Chinese President Xi Jinping, allowing their nationals to fish in the country’s exclusive economic zone in the West Philippine Sea.

“He has not been pro-Filipino in his relations with US and China, not just in military affairs but even in the country’s economic affairs. These have been the same policies of his predecessors, which he continues to espouse,” said P1nas co-convenor and former Bayan Muna Rep. Neri Colmenares.

US intervention in the Philippines under Duterte

While US presence in the country may be getting less media glitz, its economic and military intervention continue to this day.

In his first year in office, Duterte made it to the headlines following his infamous “son of a bitch” remark against former US President Barack Obama for criticizing the early days of his bloody war against illegal drugs. He, too, threatened to cut ties with the US. 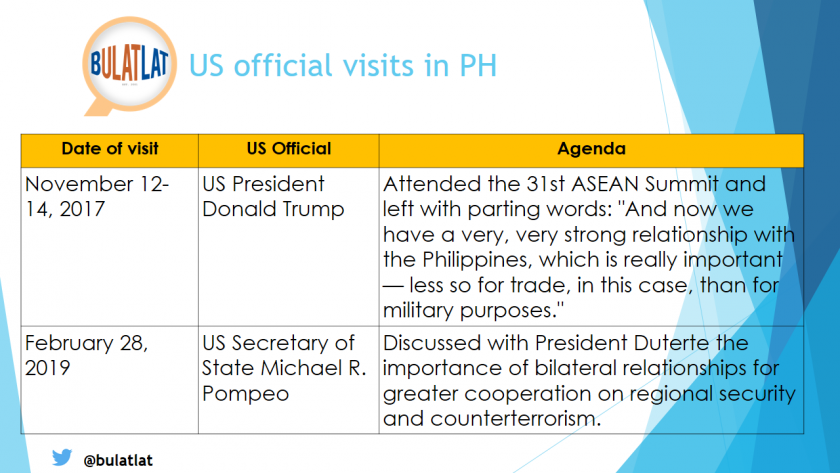 Colmenares said the president’s sound bites against the US government is belied by the continuing implementation of lopsided military deals such as the Visiting Forces Agreement, Enhance Defense Cooperation Agreement, and the carrying out of the “Balikatan,” a joint military exercises between the US and the Armed Forces of the Philippines.

In fact, US military funding, too, has not ceased under the Duterte administration. Modernization funds for the military, particularly in the security affairs in Mindanao, which is currently under martial law, has continued. 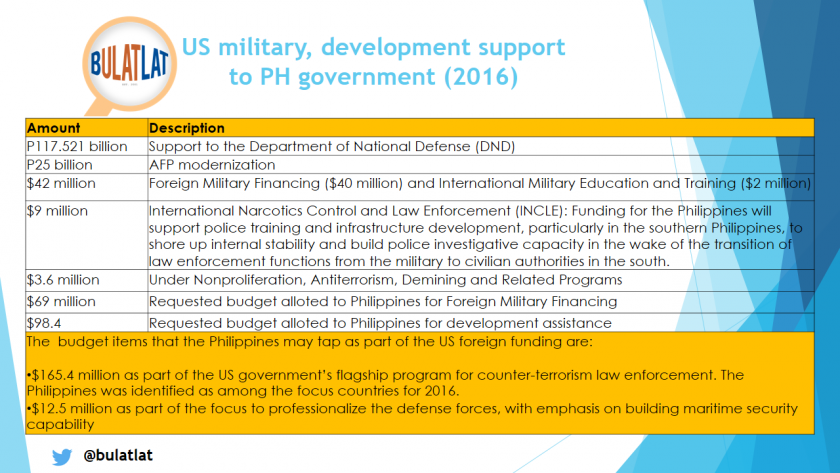 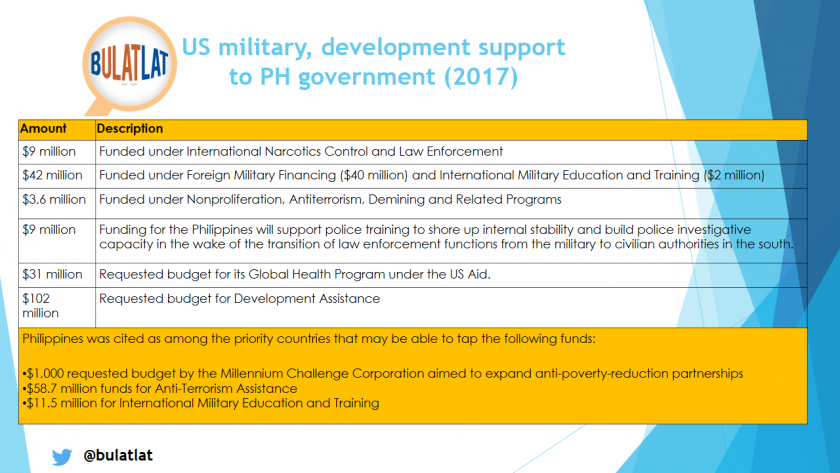 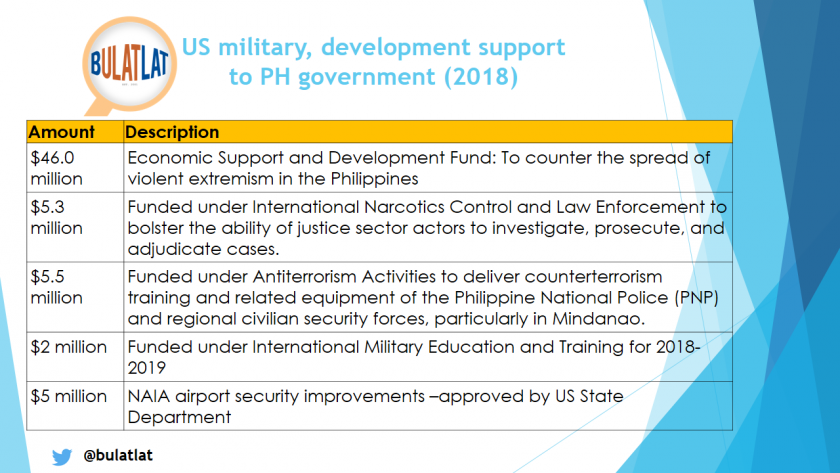 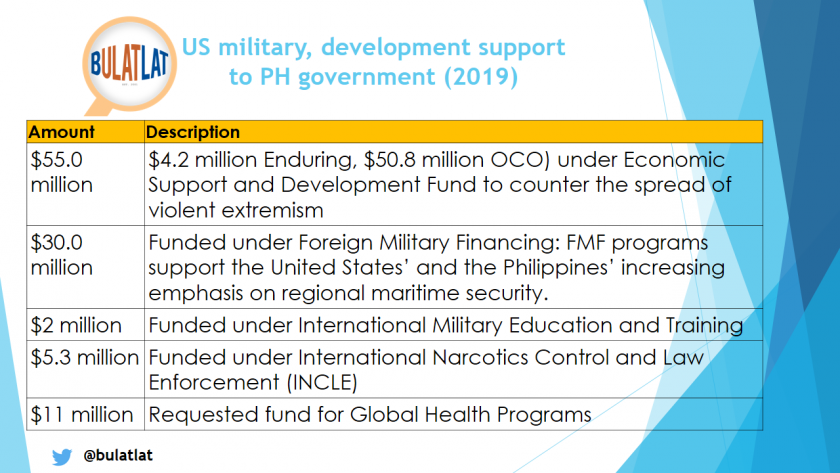 Last month, the Communist Party of the Philippines assailed Duterte’s continuing “subservience to US” as the latter’s warship has recently docked at the Sasa Wharf in Davao City, under the cover of conducting “friendship” activities in the city.

The CPP said the docking of the warship “dwarfs China’s trawl ships in the South China Sea.”

Colmenares, for his part, added that the “US intervention remains in the country. However, under the Duterte administration, they would have to contend with China’s increasing presence. But the US has never left.”

Meanwhile, Chinese intrusion on the West Philippine Sea and its reported lopsided deals with the Philippine government is widely reported.

Among the most recent was that of reported ramming of a boat of 22 Filipino fisherfolk at the Recto Bank by Chinese, rumored to be members of a Chinese militia. The Filipino fisherfolk were left to the elements, sparking a massive outrage in the country.

That, however, is just the tip of the iceberg.

Under Duterte, deals deemed lopsided and greatly biased towards China were signed. Such loans have increased the country’s debt by P2 trillion under the present administration, bringing it to P7.9 trillion as of May 2019, according to progressive think tank Ibon Foundation. 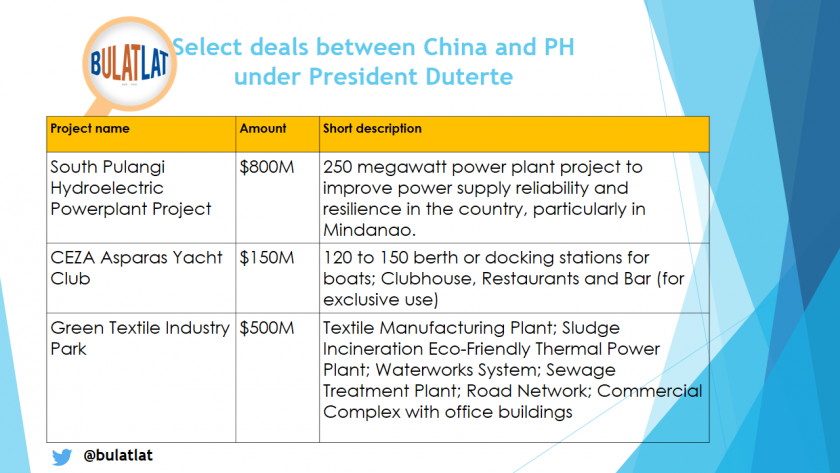 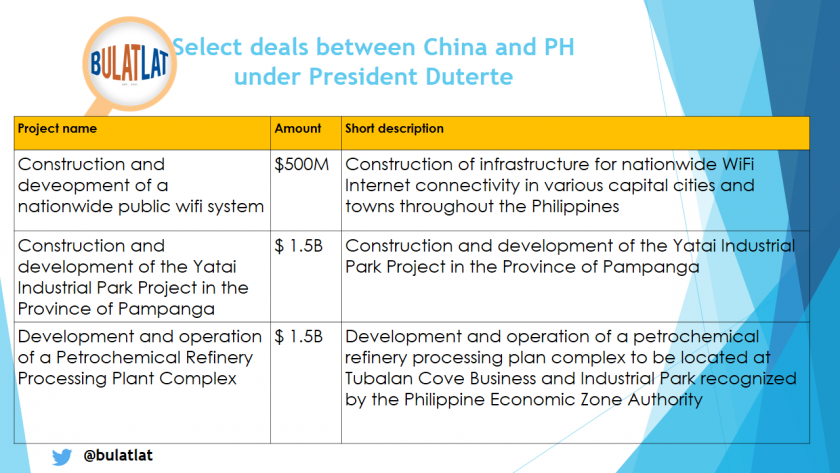 Among the most controversial deals with the Chinese government, however, is the infamous proposal to revive the construction of the Kaliwa Dam to supposedly answer the water crisis in the country’s metro.

The proposed dam construction is set to displace some 10,000 indigenous peoples from their ancestral domains. It reportedly had a P10.9 billion commitment from the Chinese government.

Duterte’s response to critics, assailing him not just for inaction but also for allowing the continuing China intrusion in the country, has been been filled with threats, saying that asserting the country’s sovereignty would mean going to war with China.

Allowing such lopsided deals with China may also put at risk the finite resources in Philippines’ exclusive economic zone for the country’s future generation.

Colmeranes, however, reiterated that the president knows that China will not invade the Philippines, as in seen in the cases of other Southast Asian countries that also have claims to the disputed waters. He alleged that these are but “paltry excuses.”

If China wanted to go to war with the Philippines, the former lawmaker said it could have done so when the Philippine government filed a case before the Permanent Court of Arbitration, which may be considered as the “sharpest” and has never been done by other country claimants.

Under the Duterte administration, Colmenares said the Chinese government has finished the construction of all its seven military camps in the disputed waters – putting a wide disparity in terms of military might between China and other country claimants.

Recently, Duterte is reviling what the present administration considered as foreign intervention – referring to the recent United Nations Human Rights Council resolution, calling for an investigation on the human rights abuses in the country – when it is allowing itself to be kowtowed by both US and China imperialist powers.

Colmenares said the Duterte administration’s threats to cut off ties with Iceland, for one, shows its intolerance for dissent. The human rights lawyer said Duterte, who used to be a fiscal, knows that the investigation being ordered by the UNHRC is a “normal process.”

Asked what is to be expected from Duterte in relation to his foreign policies, he said that Duterte seems to be adjusting his positions and pronouncements on these issues whenever there is a strong public outcry.

Colmenares said it cannot be ascertained what Duterte will decide on as of now as it would depend on how the Filipino people will respond to his foreign policy. He said, “we can still save the West Philippine Sea.” (With reports from Dawn Cecilia Peña and Arneth Assidao and graphics by Alyssa Mae Clarin)