The violence that erupt from time to time in Negros is but a painful reminder of the longstanding land problem and unjust system operative in Negros.

By JHIO JAN A. NAVARRO*
Bulatlat.com

Negros, an island of landlords, has ever since been rife of agrarian tensions. From the bloody Escalante Massacre of 1985 to the more recent Sagay 9 and March 30 massacres, violence entrenched in land conflicts remains heavily pervasive.

The inhumane killings have elicited indignation from human rights advocates and public outrage both exerting strong pressures for prompt and impartial investigations. Individuals from other sectors have also boldly spoken against the wanton killings. One of such personalities who is both vocal and critical is a Negrense himself, Bishop Gerardo Alminaza of San Carlos.

A staunch advocate of social justice, Bishop Alminaza has made it to the headlines by getting out of his way, demanding a thorough probe on the case of the 14 farmers killed in Negros Oriental. Claiming that the victims lived within the boundaries of one of the diocese`s mission stations, the bishop demanded quick and thorough investigation from the authorities. More so, the prelate boldly brought to the fore and questioned the alleged lack of arrest warrants when the apprehension took place.

In light of the election results in the province, Bishop Alminaza also appealed to the newly elected officials for a multi-sectoral dialogue to seek solutions to the lingering social injustice dilemma that he believes is rooted on land disputes.

Below is an interview with the good bishop conducted on May 25. The questions were sent on-line via messenger to Bishop Alminaza who was then in Ad Limina visit to Rome.

Q: Since the previous year, Negros has claimed the headlines for countless peasant killings perpetrated by state elements. As a bishop in Negros, what can you say about this?

A: The killing of anybody – a human being endowed with inherent dignity and inalienable rights – is certainly unacceptable to say the least, more so if the victim is defenseless, already a victim of social injustice and is simply fighting for his/her legitimate rights as in the case of farmers in Negros! It becomes even worse if the very government agency mandated to protect and defend those who have less in life and in law are responsible for their killings! What’s lamentable about these killings is that the victims were not given their right to due process, they were heard pleading for their life. According to state forces, their death was summarily justified by the claim that they fought back – “Kasi nanlaban!” Such response to our social problem by state forces has no place in a civilized and more so in a Christian society. 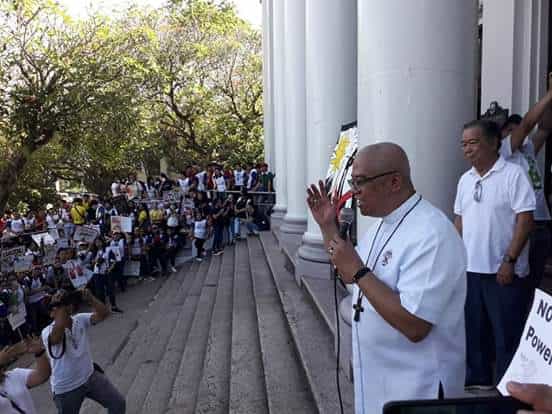 Q: Last October 20, 2018,the incident tagged as “Sagay 9 massacre” gained nationwide attention. Many government officials vowed to deliver justice in the soonest possible time and the police pledged impartial investigation. However, less than a month after this, Benjamin Ramos, pro bono lawyer of Sagay 9 was killed and until now justice for the families of the massacred remains elusive. What does this indicate to Church leaders like you?

A: The government can’t blame anyone if some of us will conclude that critics of the present administration are being silenced. Our history is replete of such stories! Prophets suffer the same fate. Our Lord Himself was sentenced to die on the cross between thieves! It’s also a fact that where there is long standing grave social injustice, the wheels of justice do turn ever so slowly. We can’t expect those favored by the present state of affairs to simply give up their position of privilege! The common state response is to tag them as communists or rebels and as such they are immediately stripped of their human rights and anybody then feels justified in killing them. This betrays a lack of solid moral grounding, not to mention the spirituality that all who believe in God should have. To follow Christ is a risky business. It’s not for the faint-hearted. He Himself said, “No disciple is greater than his Master.” One has to be prepared to be considered and killed as an enemy of the state!

Q: Just recently, Negros has once again found itself on the headlines with the killing of 14 peasants in Negros Oriental. According to the police they are lawless elements who resisted a duly constituted arrest. Do you subscribe to this sort of justification? Why or why not?

A: Lest I be misunderstood – as I am these days – we want our security forces to do their job well in keeping the peace and order of our communities. We acknowledge their sacrifices and their efforts to defend our country and our democratic principles and it is precisely when they themselves violate these that we are greatly disheartened and disappointed, pretty much in the same way when we learned of cases of sexual abuse committed by our clergy who vowed to bring us closer to God and to witness to God’s faithful and constant love! Listening directly from the families of victims themselves and some eyewitnesses, corroborated by independent reports, we are afraid our security forces have committed gross irregularities and human rights violations in their conduct of “operation Sauron” or Sempo (sychronized and enhanced management of police operation) last December 27, 2018 and March 30, 2019 and should really be thoroughly investigated. Sadly, however, we don’t anymore hear of any update on this. Various accounts have indicated that the victims did not and could not have fought back as in the case of the barangay captain in Manjuyod for example who sustained seven gunshot wounds in his body, including his genitals. The protocol for serving search warrants was not followed. The whole conduct of police operation acquired an even uglier face if it is proven true that they were done to meet the expected quota, to receive the promised reward money and for them to get a promotion.

Q: The separation of the church and the state had been a constant issue thrown to people like you, critical of the administration’s policies. Despite this, why do you persist?

A: I welcome honest and well-meaning feedbacks but it saddened me to read reactions from people who resort to argumentum ad hominem (personal attacks) and totally missed the issue. Some of their arguments are: 1) separation of Church and State; 2) we don’t pay taxes so we have no right to make comments on the way our government is run; and, 3) we can’t even correct our errant priest so why criticize government!

Aside from being a legitimate citizen of our country, as a Church leader I am duty-bound to teach and clarify which actions are in accord with our moral and spiritual teachings and should be upheld and which constitute a grave error or violation and should be therefore denounced or avoided. Simply invoking the separation of Church and State outside its proper context is obviously indicative of a closed mindset or of a heart misplaced (not in the right place). I persist because we do what we do — not in order to win a popularity contest or establish a mutual admiration club but simply out of conviction that is faith-based, which means it is motivated by my love for Christ coupled by the soundness of the course of action chosen and valued among available choices. It is discerned as most consistent with and integral to my identity as Filipino Christian ordained for priestly service. Our God as witnessed by Christ took the side of the suffering people, those most excluded and oppressed. For as long as the social order is far from the kingdom of God, our work – our mission – continues…

Q: In light of the rampant killings and injustices in Negros, what is your message to the faithful?

A: First of all, we need to make sure that we in the Church do not become part of the established order that keep the poor poorer and favor only the few. It is so important that we be critical of ourselves when we begin to enjoy the status quo of grave social injustice and turn a blind eye to all that prevent the disadvantaged from enjoying the fruits of the earth and their honest labor.

Secondly, it is never God’s will that there exists among us social inequality, and worse, that only a few enjoy the abundance of God’s creation.

Thirdly, militarization characterized by violence, killings, intimidation, harassment like red-tagging can never be a solution to an already violent situation brought about by social injustice. Our security forces should keep asking the hard questions: What drives people to resort to violent armed struggle? What makes them vulnerable to ideologies? How can we win the hearts of people victimized by unjust structures? Often these people don’t have access to basic social services that government is supposed to provide. We need therefore to help one another to address the root causes of the social unrest in Negros.

Fourthly, it remains a scandal that in a country predominantly Christian there exists a wide gap between the rich and the poor, that a few own vast tracks of land and continue to amass wealth while the fruits of labor are not justly shared.

The violence that erupt from time to time in Negros is but a painful reminder of the longstanding land problem and unjust system operative in Negros. Poor, competent and qualified candidates for public office, for example, will never get the chance to get elected for the system won’t simply allow them. Aids to help the poor are never meant to alleviate them from poverty but sadly they are done to keep them poor and under the control of the powerful! Disturbingly we seem not to question it anymore and the Church may unwittingly reinforce and legitimize the unjust situation. Those who rock the boat risk being silenced or killed! In 2021, the Catholic Church in the Philippines will celebrate the 500th Anniversary of the Arrival of Christianity in our country. We are grateful we remain predominantly Catholic yet our public life portrays many inconsistencies and contradictions, for example: (1) the conduct of our local and national elections with rampant vote-buying, intimidation and questionable automated election system; (2) we signed as co-signatory to the Paris Agreement to help mitigate global warming yet we keep allowing the construction and operation of coal-fired power plants in the country, for example; and, (3) impressive religious and pious display of faith yet there exists glaring social inequality.

Our challenge is how to narrow the gap, how to acquire a consistent lifestyle and how to offer an alternative, coherent public witness of faith that addresses the heart of our social problem. Let’s live according to the spirit of “ubuntu” (“I am because we are!”, the principle of synodality – journeying together / church of communion / never a self- referential Church. Let’s actively build a more listening, participatory Church by organizing and strengthening our basic ecclesial communities. Let’s collectively hear the “cry of the poor” and the “cry of our common home”! Let’s shift from the arancel system of supporting the Church with its inherent semblance of commercialization of the sacraments and priestly ministry to stewardship and tithing system. Let’s do a lifestyle check and open ourselves to the call for greater financial transparency and accountability. Let’s make sure justice is served for those unjustly killed and those responsible will be held responsible and will not go free with impunity.

* The author is a staff writer of Pagbutlak, student publication of College of Arts and Sciences UP Miag-ao Iloilo campus and an incoming Negrense sophomore of the University of the Philippines Visayas taking up BA in Psychology and