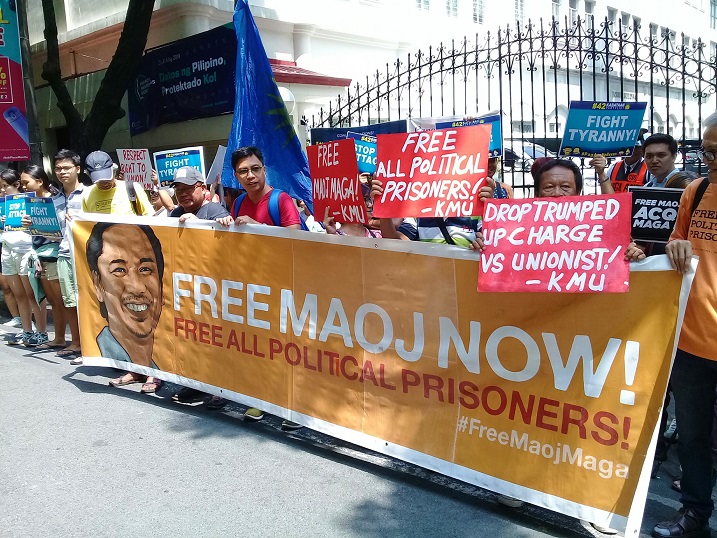 MANILA – A few days before Marklen Maojo Maga’s scheduled judgement hearing, rights defenders, youth activists, relatives and fellow unionists held an action May 28 at the gates of the Department of Justice. They called for the junking of false charges against the imprisoned trade union activist Maoj Maga, and for freedom of other imprisoned unionists in the country. Maga is set to face judgment on false charges of illegal possession of firearms on June 3, 2019.

The KMU, the Ibon International and other groups urged civil society organizations around the world to release statements and other manifestations of support towards freeing Maoj, and the political prisoners in countries where workers and peoples are asserting their rights and sovereignty. They urged the public to participate in actions to counter the trend of shrinking democratic spaces.

In other countries, supporters also conducted coordinated picket protests and sending of letters of appeal to the Justice department calling for Maga’s freedom.

The International Coalition for Human Rights in the Philippines asked Justice Secretary Menardo Guevarra to take action to withdraw the trumped-up charges against union organizer Maga.

“We consider the detention of Mr Maga to be unlawful,” said the coalition in the letter. 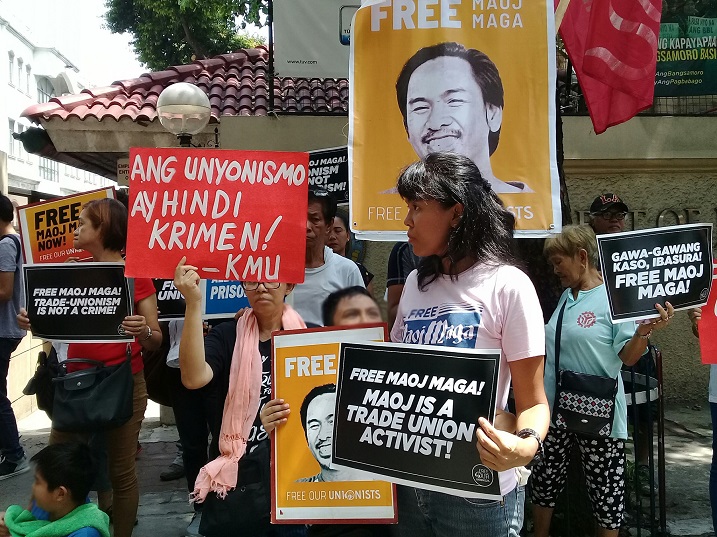 Maga is an organizer of the Kilusang Mayo Uno Labor Center. He was forcibly taken by a group of men while playing basketball near his home on February 22 last year. His “arrest” only became known to his family and fellow unionist the following days. The details of his “arrest” went like this: He was accosted on a basketball court by at least a dozen men, blindfolded and forced into a vehicle without being told why or where he was being taken. At the police headquarters, he was subjected to hours of interrogation and not given the chance to contact his lawyers and family.

The International Coalition for Human Rights in the Philippines (ICHRP) said the arresting officers added to the outrage with the “absurd charge of murder in far-away Mindanao,” plus the police planted a .45 caliber pistol on Maga. Now, ICHRP is appealing to the Justice department on behalf of Maga who, they say, has been put through misery in several congested prisons as well as a quarantine-isolation cell when he has not committed any crime.