“For 39 years, national labor center Kilusang Mayo Uno (KMU) has been at the forefront of Filipino workers’ struggle for living wages, regular jobs and democratic rights.”

MANILA – The labor center Kilusang Mayo Uno turns 39 years old this Labor Day. Founded at the height of Martial Law under the then strongman Ferdinand Marcos, the labor center has organized and mobilized workers all over the Philippines and even abroad for common workers’ issues that include wages, working conditions, jobs, union rights and human rights, women workers’ equality, and democratic and political issues such as national freedom and sovereignty, agrarian reform and nationalist industrialization, among others.

“The KMU has withstood many challenges,” said Jerome Adonis, KMU secretary general, as he and other KMU leaders prepared to blow the candles on a chocolate cake during a break while preparing for the May 1 celebration.

The labor center proudly looks back at its engagements with employers’ confederations, the Department of Labor and Employment and at least six previous administrations from Marcos to Aquino, all of which had included the KMU and its leaders in its orders of battles for one reason or another.

“For 39 years, national labor center Kilusang Mayo Uno (KMU) has been at the forefront of Filipino workers’ struggle for living wages, regular jobs and democratic rights,” Adonis said. The labor center has thus been embraced by workers, he said, respected by and allied also with different sectors including small and medium enterprises. But in contrast to this, the KMU has consistently been despised by exploitative capitalists and tyrants, Adonis said.

Indeed, from the time of their founding up to now, the KMU has always seemed to be a target of government or government-backed vilification and harassment. In a crackdown on trade unionism, Marcos had caused the imprisonment of KMU leaders while promoting the government-backed Trade Union Center of the Philippines in the 70s and 80s.

The KMU and various supportive labor groups responded with demonstrations, coordinated strikes and other concerted mass actions, culminating in their participation in the first Edsa People Power that ousted Marcos.

The labor center works to rally the Filipino workers against all these, and recommend reforms. Advocating for the workers’ welfare, they also happen to run against the narratives of economic growth, revealing some unwanted truths and incurring in the process the ire of every incumbent administration claiming the growth narrative. 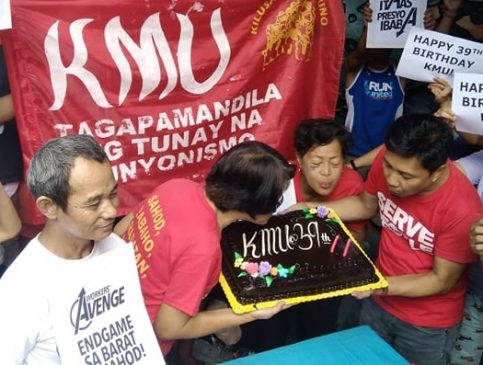 At their national headquarters in Quezon City today, their allied artists from Tambisan sa Sining worked on a giant effigy and mural depicting President Duterte, the seventh president the KMU has engaged with since its founding. Consistent with their 39 years of calling for justice for the working people, they are depicting this May 1 the main causes of injustices that they say should be eradicated.

President Duterte will join their May 1 celebration in the form of a huge effigy of an evil court jester with forked tongue, riding on a killer coffin-like TRAIN, an allusion to the Duterte administration’s new tax laws.

“Amidst consistent brutal attacks by capitalists and oppressive regimes, Filipino workers have gained significant political and economic victories. The KMU continues to defend these hard-earned victories of the Philippine labor movement against the onslaught of neoliberal economic policies,” their birthday statement reads.

At present, they are campaigning for a P750 national minimum wage, regularization of all contractual workers and an end to all forms of contractualization. They are also demanding for a strict implementation of labor standards, occupational safety and health, and respect of labor and human rights.

Adonis said that as the KMU approaches 40, it will continue the fight “against anti-poor, anti-people and anti-Filipino government policies.”

“We will continue to advocate for genuine social change, freedom and democracy,” Adonis said.

KMU unions report various levels of success in asserting the regularization of thousands of contractual workers through CBAs and various forms of collective actions.

As the KMU remains a national labor center today, Adonis said they have “countered gross attacks on workers’ universal right to freedom of association by defending workers’ rights to unionize and collectively bargain.” Since their founding, the KMU and advocates have documented workers’ struggles against illegal retrenchments, dismissals, downsizing, criminalization of labor issues and other union-busting schemes.

The KMU has been chaired by Felixberto Olalia, Rolando Olalia, and Crispin Beltran, now regarded as heroes in the Filipino struggle against tyranny. Its current chairperson is Elmer “Bong” Labog.