Hail to the (Endo) King!

Sy may indeed be a hardworking man. But so are his conglomerate’s employees. With Sy’s determined use of neoliberal policies such as contractualization, the fruits of tens of thousands of his employees’ hard work go largely to his companies’ profits. Here lies the unheralded side of his Forbes-topping net worth, the secret to his centavo to billion peso taipan tale and why labor groups are raising their placards to hail the Endo King.

MANILA – Hard work. Compassion. Self-made man. Philanthropist. Tycoon. These words often describe Henry Sy, the richest man in the Philippines according to Forbes magazine for over 10 years in a row. Sy died in his sleep last week at the age of 94, setting off accolades to his life’s “rags to riches,” shoe-seller to billionaire story.

“You have to have a dream, whether big or small. Then plan, focus, work hard and be very determined to achieve your goals. There is no substitute for hard work.”

This is one of Mr. Sy’s most quoted remarks. And when other business titans honor your “legacy,” you must have done something that reverberates in their business goals as well.

Except for his business empire being forced to compromise with the Ayala Group as to where the common LRT-MRT railway station should be constructed, he almost had it all by way of cornering the transport hubs in his malls. His mall chain, the largest in the Philippines, took off from the tycoon’s astute timing and buildup of influence toward getting and maximizing the most promising sites for his malls.

But in a world under neoliberal economic policies, there is another side to his reportedly outstanding achievements. The tycoon’s financial success was done at the expense of thousands of people displaced by his mall and real estate expansion and reclamation, not to mention the workers employed as “eternal” contractuals in malls, banks and hotels.

Sy may not be the only tycoon who made the most of the Philippine government’s loopholes for employing contractuals, but his companies happen to employ the biggest number (more than 94,000). Because of this, the Kilusang Mayo Uno (KMU) branded him “contractual king,” or Endo King. (Endo is a colloquial term for “end of contract,” typically done after five months of work to prevent an employee from being given a permanent position which would legally require the company for which he or she works to grant security of tenure and other benefits.)

Since the 1990s, his mall chain has been one of the first Philippine companies to embrace contractualization. Like other big companies it began with a combination of retiring the regular employees, busting the unions, disrespecting the collective bargaining agreements (CBAs) when the unionists’ ranks dwindled with the drop in the number of regular workers, refusing to bargain with the diminished union for a new CBA and trampling on the workers’ strikes, among others.

SM unionists had been bludgeoned, dragged and pushed away from the malls by armies of blue guards and police during their strikes in 1994, 1999 and 2003. During pickets, despite the support of women’s alliance Gabriela and other sectors, the mostly women employees suffered sexual harassment. With blue guards and police hiding the picket from customers’ view with their body, some women strikers had been heard shouting, “Please maintain a little distance, any nearer and you might get us pregnant.”

Not content with harassing the unionists, some SM malls drowned out the chants of the picketing workers with blaring loudspeakers in front of the picket line.

Where his business expanded, so did his company’s contractualization and avoidance of unions. In 2016, as his holdings’ China Savings Bank was completing its takeover of Planters Development Bank, its bank executives put pressure on unionized employees to agree to a retire-rehire scheme if they wanted a chance at being hired by China Savings Bank.

Sy is leaving this world and his heirs with the ubiquitous SM malls (reportedly more than 70 across the Philippines, some located on reclaimed land such as the Mall of Asia in the Manila Bay, along with seven malls in China and 34 percent of CityMall); 43 residential projects; six office buildings; six hotels; control of BDO, one of the largest domestic banks in the Philippines; about one-fifth of China Banking corporation; stakes in gaming (through 28 percent ownership of Belle Corporation); ownership of more than one-third of Negros Navigation Company; nearly 30 percent of Atlas Consolidated Mining and Development Corporation, among others. His personal net worth was estimated at $20 billion. 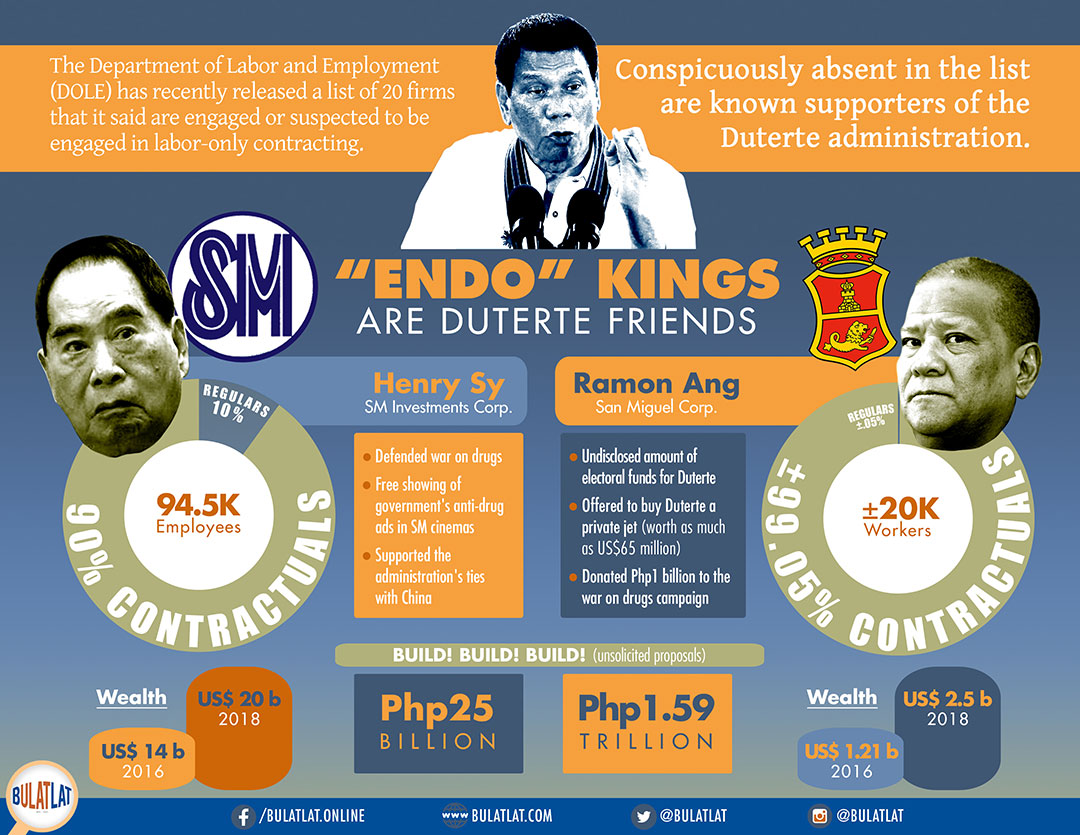 By its own account, the SM Group has more than 94,500 employees. According to one estimate, nine out of 10 SM employees are contractuals.

Yet, Sy’s conglomerate was excluded in the Department of Labor and Employment’s list of hotspots of contractualization because Labor Secretary Silvestre Bello was “satisfied” by SM Group’s promise to regularize 10,000 contractual workers.

A 2018 study by the Center for Women’s Resources (CWR) showed that seven out 10 employed women are in services sector, such as the jobs available at SM malls, and that despite the increases in profit, workers’ wages have remained low.

Women’s alliance Gabriela led mass actions of mall workers in late 2017 after receiving health complaints from overworked employees. It appeared that the employees’ 1.5-hours aggregate break was reduced by half. Workers were contracting, among others, urinary tract infection (UTI), due to inadequate restroom breaks.

Since they are not unionized, the workers in Sy’s companies do not enjoy wage increases with the rise in profit. In 2016 alone, a subsidiary of Mr Sy’s conglomerate, SM Retail, recorded a seven-percent increase in profit from a total revenue of $5.5 billion, CWR said, adding that SM expanded to 2,110 stores by end-December 2016. But the women workers’ wages remain stagnant. In 2017 his entire conglomerate’s profit margin was 30.33 percent.

Sy may indeed be a hardworking man. But so are his conglomerate’s employees. With Sy’s determined use of neoliberal policies such as contractualization, the fruits of tens of thousands of his employees’ hard work go largely to his companies’ profits. Here lies the unheralded side of his Forbes-topping net worth, the secret to his centavo to billion peso taipan tale and why labor groups are raising their placards to hail the Endo King.

(With report by Ronalyn V. Olea)