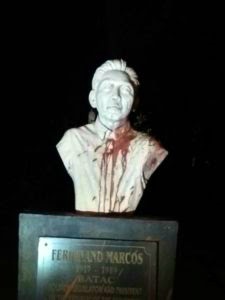 The youth said they acted with farmers’ group Pambansang Katipunan ng Magbubukid (PKM)-Ilocos. They said they did this to Marcos’ bust in response also to Ilocos Norte Gov. Imee Marcos’ statement urging the people to “move on” from the Martial Law that her father imposed on September 21, 1972.

“This act gives utter proof that the youth and the people have never forgotten the Marcoses’ pillage of the nation’s coffers, violations of human rights, torture, illegal arrests, abuse of power and crimes against the people,” Kabataang Makabayan-Ilocos said.

The first batch of Ilocano Heroes was unveiled at the Heroes Walk and inaugurated through the initiative of Ms. Marcos on December 5, 2013, during the province’s celebration of the Tan-ok ni Ilocano Festival of Festivals. They unveiled another batch in 2015.

In unveiling the heroes’ busts in 2013 and 2015, the Ilocos Norte local government said they were honoring these heroes for having “brought freedom, fame, and glory to the province as well as to the country in the past century.”

The youth group Kabataang Makabayan decried Ferdinand Marcos’ inclusion, saying he is not a hero but a convicted rights violator and an ousted tyrant. They also warned President Duterte, assuring him that he will suffer the people’s wrath for his coddling of the Marcoses and also of former President Gloria Macapagal-Arroyo. Both presidents, they said, had blood debts to the people and were puppets of the US and China imperialism.