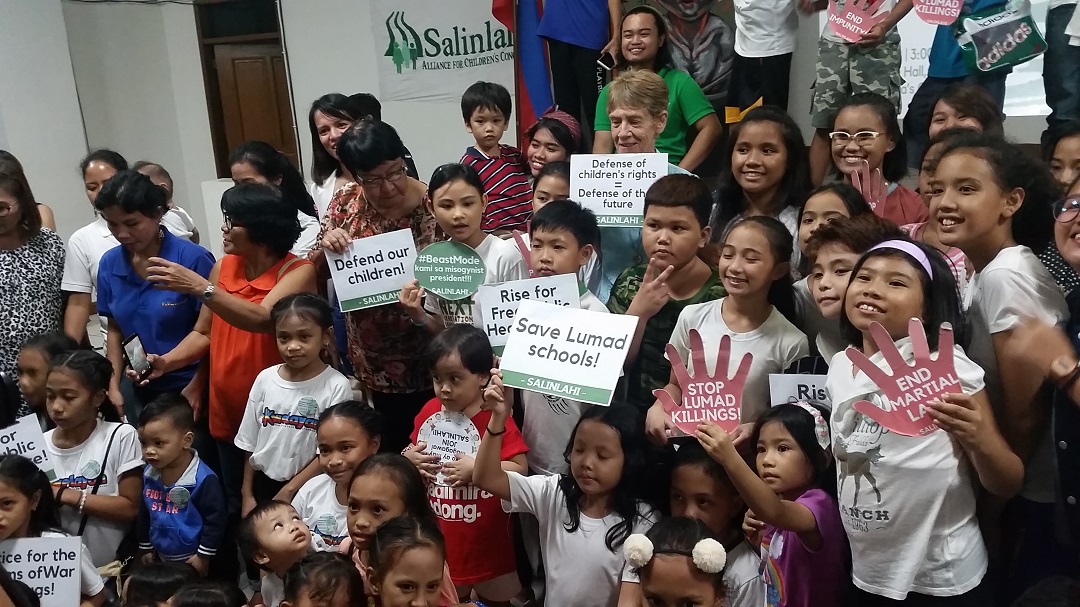 Life is more difficult for children these days, especially for those who belong to poor families.

MANILA – After two years of President Duterte’s administration, the Salinlahi Alliance for Children’s Concerns does not see a good future ahead for Filipino children.

Life is more difficult for children these days, especially for those who belong to poor families, said Eule Rico Bonganay, Salinlahi secretary general on its Ulat Bulilit 9, with the theme Strengthen Unity in Defense of Children’s Rights and Welfare, which was held Saturday, June 23 at St. Scholastica’s College in Manila.

On the same day, the group also commemorated their 32nd year anniversary.

Salinlahi presented their study on the current situation of children, two years after Duterte became president. The study cited the implemented policies that further aggravated the condition of the poor instead of uplifting them.

The study particularly took note of three policies: the first package of Tax Reform for Acceleration and Inclusion (TRAIN) law, the war against the poor, Lumad and the Moro people, and the Dengvaxia fiasco that violate children’s rights and welfare.

“Those children who did not fall victims to Tokhang are now suffering from enforced diet amid skyrocketing prices of basic commodities brought about by the TRAIN Law. At the same time, thousands of Dengvaxia vaccinated children are further made to suffer as government focuses more on advancing its political agenda than responding to the medical needs of the children victims,” said Bonganay.

Children are part of the sector they belong to, said Bonganay. And as majority of the population are poor this means that many Filipino children are also living in poverty.

According to 2015 data of the Philippine Statistics Authority (PSA) farmers, fishermen and children belonging to poor families are sectors that are poorest. They are also registered as sectors with highest poverty incidence in 2006, 2009 and 2012. Farmers ranked the highest with 34.3 percent, fishermen at 34.0 percent and children at 31.4 percent.

Without available adequate and permanent jobs, more children are forced to help their parents in finding ways to make both ends meet. The study said majority of children are working in agricultural production,58 percent. But these children are exploited as they fall under the unpaid family labor, said Bonganay.

Unpaid family labor or workers according to the PSA, refers to family members who work without pay in a farm or business operated by a family. This is rampant in provinces where farmlands are not owned by farmers but rich landlords or companies that utilize the land as plantations.

Poor children are also vulnerable to hunger and malnutrition. Citing the Social Weather Station data in the third quarter of 2017, which revealed that 2.7 million families experience involuntary hunger. The National Nutrition Survey of the Food and Nutrition Research Institute (FNRI) also showed that the number of stunted and wasted children remain high. In 2015, there are 3.8 million (33.4 percent) stunted children while there are 807, 057 (7.1 percent) wasted children.

The group said the latest study of FNRI in 2015 showed the worst malnutrition rate in the country for the past 10 years.

“There is a connection between the lack of right nutrition to the family’s economic situation,” the study read adding that most number of malnourished children are from the poorest provinces such as the Autonomous Region of Muslim Mindanao (ARMM).

Read: Ph ranks 9th among countries with most stunted children

This is aggravated by the TRAIN law, said Bonganay which resulted to the increase in prices of basic commodities.

No medical assistance to children vaccinated with Dengvaxia

The present administration also has not addressed the fears of parents whose children were inoculated with Dengavaxia, said Bonganay.

While the Department of Health (DOH) guaranteed medical assistance to children vaccinated by Dengvaxia, many parents said they have not received such, said Bonganay.

Bonganay said the Duterte and the Benigno Aquino administrations are both responsible to what they described as “biggest public health disaster.” At least 800,000 Grade 5 children were vaccinated with Dengvaxia in April 2016. It was continued until the present administration under then Health Secretary Pauly Ubial.

Read: Dengue mass vaccination was based on politics, not science – health group

Other threats to children

The future is also dim for the children of Marawi City. Bonganay said majority of the 400,000 displaced people in Marawi are children.

“Thirteen months after the declaration of Martial law in Mindanao, a large number of Moro families are still suffering in evacuation centers. Duterte refuses to grant Moro children’s wish of seeing their homes in the city of Marawi. No wonder why the island remains to be a bastion of rebellion in the country. The government itself gives them no choice but to resist.” Bonganay added.

Meanwhile, there are 44 children killed in Duterte’s war against illegal drugs and almost 65,000 children were orphaned. (Watch: Christmas wish)

Salinlahi is also wary of plans of mandatory drug testing to students Grade 4 and up, the Reserved Officers’ Training Corps and recently, the anti-tambay campaign.

“Duterte’s fascist rule makes Filipino children more vulnerable to abuses. He started it by assuring the police of protection while conducting operations which claimed the lives of about 44 children. Now he wants to bring his Oplan Tokhang to schools by requiring drug testing of pupils as young as 9 years old” Bonganay said.

Meanwhile, Salinlahi chairperson Maria Esmeralda Macaspac asked, “What kind of future is this government giving to children when there is a president that throws expletives in live television, encourages killings and deprives children of their right to education and health services?”

What children, their families and child rights advocates should do is to fight for a better tomorrow, she added.

She stressed that resistance is important to fight for the future of children. “That is why it is important that there are those who remain steadfast to resist this kind of government because we want a good future for our children,” Macaspac told Bulatlat.