‘Reclaim the Picketline’ : Why Nutriasia workers continue with their strike

MARILAO, Bulacan — “Kuya wala po akong ginagawang masama! Kuya!” (Big brother, I’m not doing anything wrong!), these were Miggy’s words as he pleaded with the five policemen to stop beating him up. In a span of less than a minute, more elements of the Bulacan City Police Station had intruded the picketline set up by about 300 workers of NutriAsia. This violent dispersal on June 14 led to the arrest of 23 individuals, including 21 workers, one minor, and Miggy, a senior high school student.

Miggy* is a member of the youth group League of Filipino Students (LFS). Like the other various sectors, he was in the picketline to show solidarity with the workers’ fight. Since June 2, about 300 members of the Unyon ng mga Manggagawa sa NutriAsia have installed their picketline right outside the company’s gate.

NutriAsia workers have been fighting for regularization and their right to form a union. On Feb. 28, the DOLE issued a compliance order directing NutriAsia to regularize over 900 of its employees. NutriAsia management, however, claimed that the striking workers are not their employees but workers of a third-party toll packer company.

The ongoing strike of the NutriAsia workers could be considered as a ‘make or break’ for majority of those who’ve decided to join. Year 2005 was the last strike conducted by factory workers in Bulacan. For more than two weeks now, various sectors have shown their support for them. For Miggy and his fellow youth, being one with the workers’ fight is decisively taking measures to create a bright future for their generation, the future workforce.
It was only on June 20 that Miggy and another youth were released. More than a week in prison taught him a lesson: If those who claim to serve and protect become the primary instigators of violence, the people will continue to resist. If those who profit so much from the suffering of thousands become wealthier, then no amount of police brutality could terminate a strike.

Miggy recalled his traumatic experience during the dispersal, “Five policemen cornered me when they saw me documenting the violent dispersal. I told them I wasn’t doing anything wrong, but they still punched me and hit me with a thick wood.” 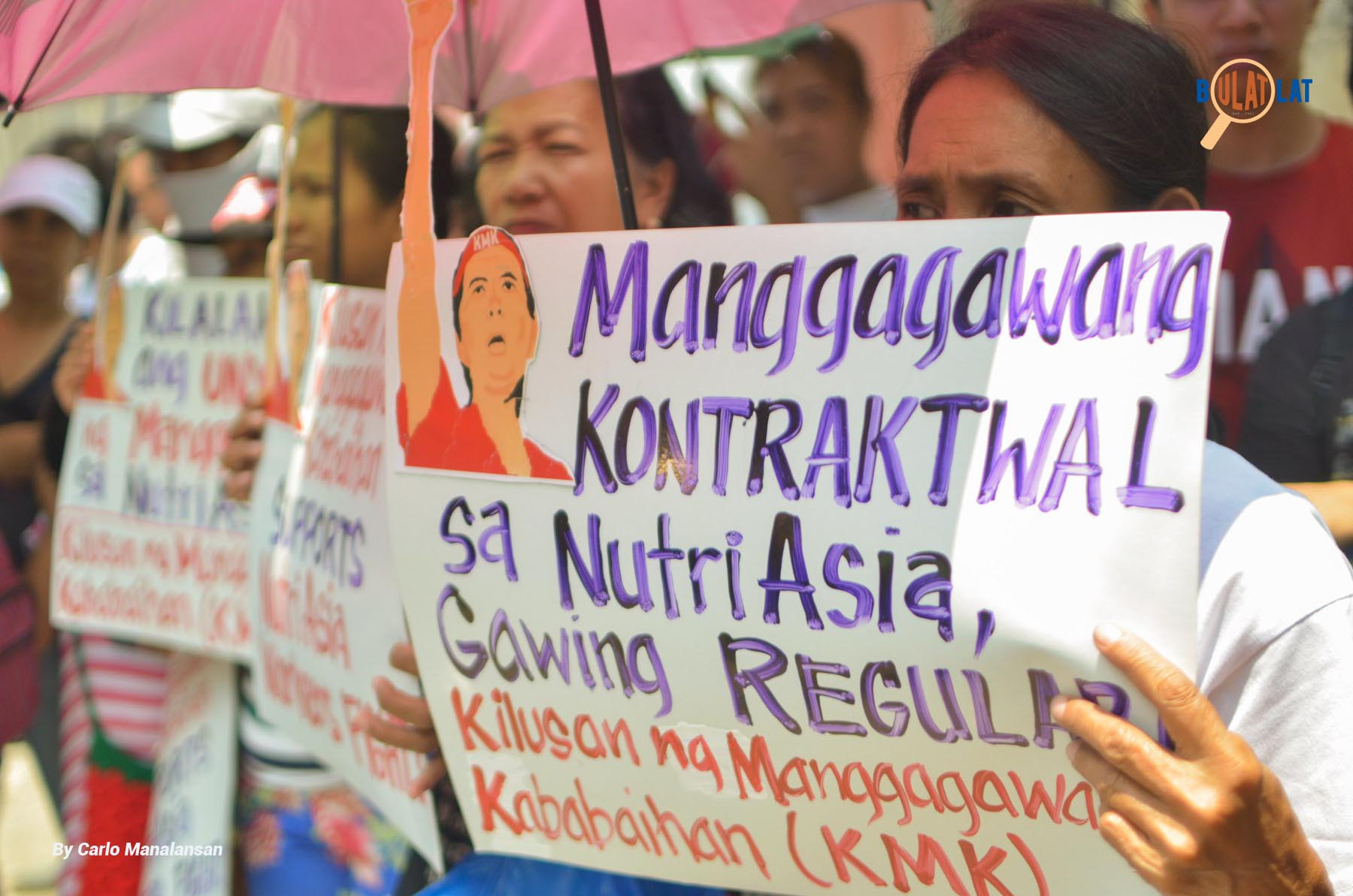 Miggy and the 22 workers were brought to Marilao Police Station. Despite having multiple bruises and wounds from the dispersal, they were charged with scandal, physical injury, direct assault, and illegal assembly. From Marilao Police station, 17 of the 23 arrested individuals were transferred to the Meycauayan Police Station.

Under the law, all labor disputes should be under the Department of Labor and Employment (DOLE). A regional trial court in Bulacan issued two temporary restraining orders (TROs) against the workers’ strike and the local police dispersed the workers on June 14.

When NutriAsia workers were attempting to reclaim the picketline on June 16, more than three trucks of policemen came, complete with long firearms, truncheons and thick rattan truncheons. They threatened to shoot the workers and their supporters.

Makabayan bloc lawmakers intervened and called Labor Undersecretary Joel Maglunsod. Maglunsod said the local police and the court must uphold the resolution mandating that all labor disputes should be under DOLE. Policemen did not budge and said they would wait for the DOLE order. Later that day, DOLE Central Luzon Director Ma. Zenaida Angara-Campita arrived at the site. The Commission on Human Rights called on security forces to observe maximum tolerance to ensure that the rights of protesting workers are protected.

For asserting their rights, NutriAsia workers were detained, arrested and slapped with criminal charges.

Out of the four charges filed against the 23 Nutriasia workers and supporters, direct assault and alarm/scandal are pending.

Miggy emotionally reminisced the difficult situation the he and his fellow arrested workers had to bear inside the prison. He felt helpless inside.
There was no proper ventilation. Over 200 inmates were made to fit in a prison cell for 60 people.

“It’s difficult inside. My fellow arrested workers could not call their families. Almost all of them are expected by their children to bring home dinner after a day’s work. I didn’t know either how I could inform my parents that I was beaten up and arrested by the police that day,” Miggy said.
Miggy had a bruise on his right arm, his back, left leg and upper right thigh.

“As every single day passed, we felt like losing ourselves. People from the outside looked at us as if we were criminals, when the real violators and perpetrators were the ones guarding the precinct,” he said.

Alvin Lascaño, who’s been working in Nutriasia for a decade, told Bulatlat in Filipino,”Our daily wages could not suffice for the needs of the whole family. Starting with our expenses for daily fare to the factory, a large portion of our wage is already deducted.”

Nutriasia as the largest producer of our staple condiments such as Datu Puti, Silver Swan, UFC Ketchup, Jufran, Mang Tomas, among others, is capable of hiring over 1,400 workers. Of this number, only 100 are regular employees while the rest are contractual workers. The workers have faced threats of illegal dismissal, salary deductions, underpaid overtime work of P619 pesos for 12 hours, lack of health insurance, and other inhumane working conditions.

Miggy and the NutriAsia workers rejoined the picketline. For them, the only thing that’s left to do is to fight.

*not his real name, identity withdrawn upon request