2 political prisoners whisked away from Crame 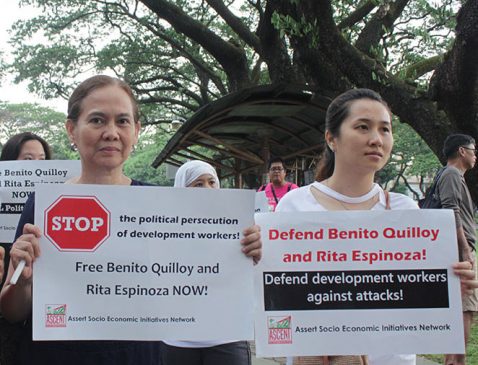 As of press time, however, the local chapter of human rights alliance Karapatan in the province said Ben Quilloy and Rita Espinoza have not reached their supposed destination.
`
By RONALYN V. OLEA
Bulatlat.com

MANILA — Political prisoners Ben Quilloy and Rita Espinoza were taken by Bayugan policemen from Camp Crame at around 2 p.m. yesterday, June 8 without the knowledge of their relatives and lawyers.

Ma. Sol Taule, one of the lawyers of the two development workers, told Bulatlat that she learned that Quilloy and Espinoza were to be transferred to Bayugan Municipal Police Station in Agusan del Sur. Quilloy is charged with murder while Espinoza is facing charges of robbery and arson.

The local chapter of human rights alliance Karapatan in the province confirmed late afternoon of the following day that the two were taken at the Bayugan Municipal Police Station.

Taule added the policemen did not allow Quilloy and Espinoza to bring their maintenance medicines and personal belongings.
Brenda Gonzalez, convenor of Assert Socio-Economic Initiatives Network (ASCENT) condemned the “dubious move by state forces.” She reiterated that the two are innocent of the fake charges against them.

“They are among the countless development workers who have dedicated their lives to serve the poor and marginalized, but are being vilified, threatened, and harassed by the government,” Gonzalez said.

One violation after another

Quilloy and Espinoza were arrested without warrant on Oct. 19, 2017 by combined elements of the Criminal Investigation and Detection Unit (CIDG) of the Philippine National Police (PNP) and Armed Forces of the Philippines (AFP) in Kabankalan, Negros Occidental. The two just came from a week-long consultation with Negros sugar farmers when they were arrested.

They were denied access to their lawyers when they were subjected to inquest in Kabankalan. On Oct. 21, 2017 the two were transferred to Camp Crame in Cubao, Quezon City without the knowledge of their lawyers and relatives.

On October 24, 2017, former PNP Director General Ronald de la Rosa presented Quilloy and Espinoza to the media, claiming that they are high-ranking members of the Communist Party of the Philippines-New People’s Army (CPP-NPA).