You Are Here: Home → 2018 → January → 16 → Salary increases for soldiers, police, but not for teachers, government employees

Salary increases for soldiers, police, but not for teachers, government employees

“Civilian employees will be left far behind by their armed counterparts although they have similar, even higher qualifications, or have spent equal, even more years in government service.”

MANILA — Before the year 2017 ended, President Duterte made sure that he would deliver on his promise to increase the base pay of military and police personnel.

Since the beginning of his presidency in 2016, Duterte vowed to increase the salaries of the military and the police force. Speaking before the troops of the Western Mindanao Command, President Duterte said the increase would take effect within that year. However it did not push through.

As soon as 2017 started, Secretary Benjamin Diokno of the Department of Budget and Management (DBM) said that the increase is “doable” in 2018. True enough, on January 15, 2018, the military and uniformed personnel received their salary increase.

Duterte recently said that he wants the salary increase of teachers be funded in the second package of tax reform.

The DBM said that Duterte’s pronouncement “needs further study” as the government would need to allot at least half a trillion pesos to double the salaries of 600,000 public school teachers.

ACT Teachers Party Rep. Antonio Tinio slammed the sponsors of Joint Resolution No. 1, authorizing the increase of base pay of military and uniformed personnel, saying that it was approved in haste without further study.

“When the proposed salary increase involves civilian employees, the government claims that it needs a lot of technical studies. But when the increase is for military and police personnel, their only bases are the risks of the job and the need to boost their morale.”

Robert Mendoza, Alliance of Health Workers chairman said they are not against the increase on the base pay of military and uniformed personnel. However, he said, they too are dedicating their life to serve their countrymen although they are in different fields of work.

“Health workers and other government employees are also committed to serving the Filipino. We give our life too so we think that we also deserve a higher increase to live a decent life,” he told Bulatlat.

The last salary increase received by the military and uniformed personnel was during the administration of President Gloria Macapagal Arroyo under Salary Standardization III (SSL 3). 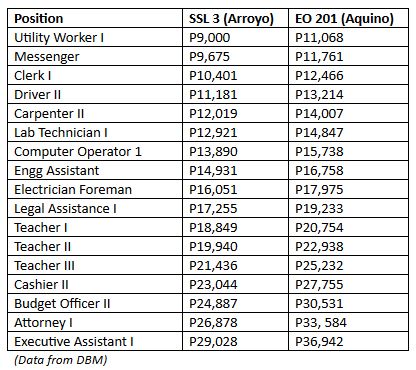 Under President Benigno Aquino’s term, their monthly provisional allowance and monthly officers’ allowance was increased. Both were implemented in tranches under Executive Order 201. It is at the third tranche of implementation this year.

The said EO was highly criticized by progressive groups because of the relatively minimal salary increase for rank-and-file employees while those in higher positions received higher amounts. Public school teacher’s entry level salary for instance only received a P2, 000 ($40) increase. Given in four tranches, they received an increase of P500 ($10) per year.

The rank-and-file employees were once again left behind under Duterte’s Joint Resolution No. 1. ACT Teachers Partylist noted the non-inclusion of significant pay hikes for all government employees, except military and uniformed personnel in the General Appropriations Act of 2018.

“This is disheartening for the 1.2 million employees in the civil service, especially the rank-and-file,” ACT Teachers Partylist Rep. France Castro said in a statement. 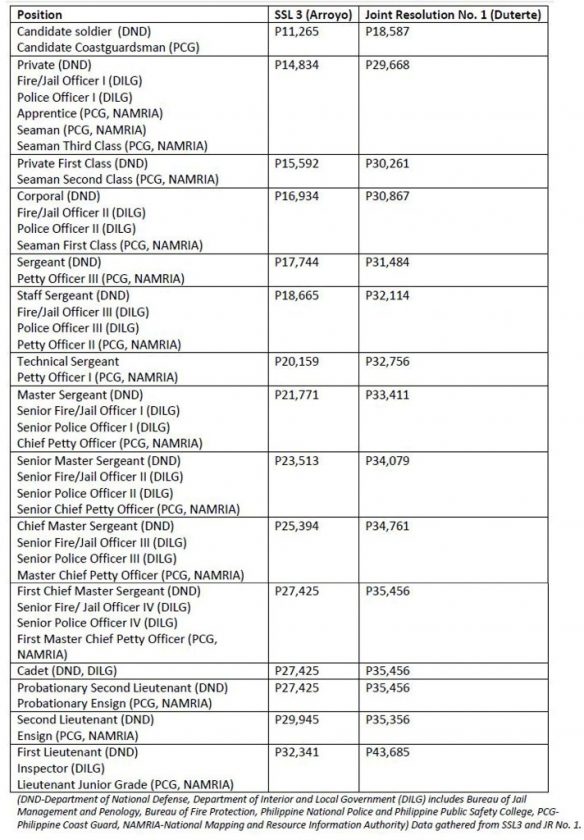 The partylist group has been pushing for an increase in the salaries of all government employees for the past years but to no avail even under Duterte.

“Civilian employees will be left far behind by their armed counterparts although they have similar, even higher qualifications, or have spent equal, even more years in government service,” he said.

Tinio explained, “Guidance counselors need a Master’s Degree, but the candidate soldier/trainee in the Department of National Defense will have an equivalent salary as the Guidance Counselor. Salaries of an Associate Professor (who needs a Doctoral Degree), and Master Teacher II will be nearly the same as 1st Lieutenant’s.”

The PO1 and Private’s salary also surpasses the salary of Head Teacher II and a School Nurse II who have more years of training and experience.

This could also cause demoralization in the ranks of the civilian bureaucracy. “?Teachers who have been in the service for 10, 20 years said ‘Di pa namin natitikman ang P20, 000 or P30, 000 na ibibigay sa mga pulis at sundalo ngayon,’” Tinio said. (We have not experienced receiving the P20, 000 or 30,000 salaries that the soldiers and police would now receive.) 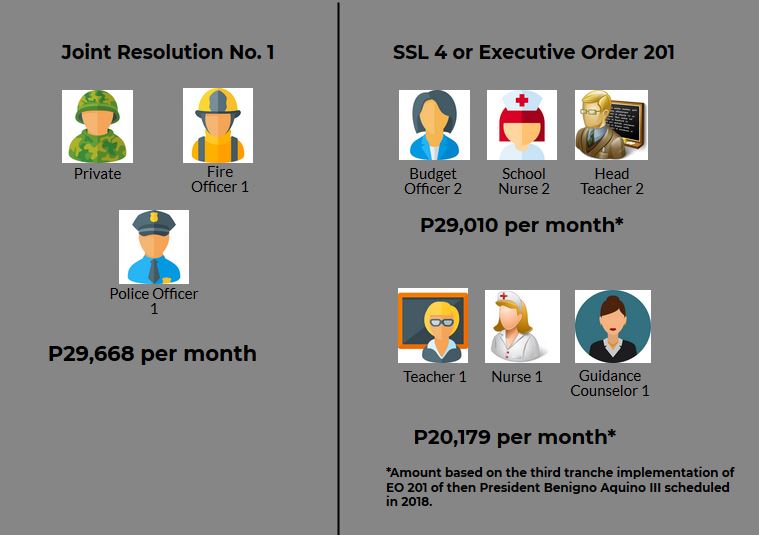 The DBM, in September 2017, has drafted Congress Joint Resolution authorizing compensation adjustments for military and uniformed personnel. The draft resolution was eventually concurred with by the Office of the President also on the same month.

On Dec. 12, the Congress ratified the 2018 national budget which also includes the P62 billion ($1.2 billion) funds sourced out from Miscellaneous Personnel Benefits Fund to increase the base pay of military and uniformed personnel.

No funds for pay hike? 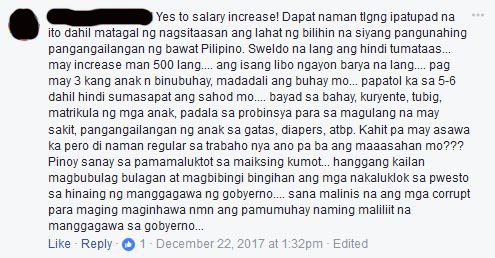 Benjamin Valbuena, ACT national chairperson, said there are ways to fund the teachers and government employees’ pay hike. He said Department of Finance (DOF) Undersecretary Karl Chua has revealed that the Bureau of Internal Revenue and the Bureau of Customs every year has P500 to P600 billion ($10 billion to $12 billion) in uncollected taxes. Hidden pork barrel and excessive funds on war on drugs can also be reviewed and rechanneled.

“If the government is serious in heeding the long time call of teachers and government employees for salary increases, the government will find the way to fund it using the national budget,” he said.

Meanwhile, Tinio clarified that while they welcome the recent statement of President Duterte on the salary increases of teachers, they are opposed to the idea that the hike will be dependent on the administration’s second tax reform proposal. “This is a new propaganda line,” said Tinio. He said since the beginning the DOF has always said that the administration’s tax reform proposals are meant to fund infrastructure and not teachers’ pay hikes.

“This is a blatant press release tactic intended to make the new tax package, the centerpiece of which is the lowering of corporate income tax, more palatable to the public. Don’t use teachers to deodorize your pro-rich taxes,” he said.

Kabataan Party Rep. Sarah Elago said the Duterte government has revealed its main priority by how it allocates its national budget.
“If the Duterte administration chooses to increase the salary of military and uniformed personnel while remaining deaf to the pleas of workers, teachers, and government employees, then it only means one thing — he is centralizing our financial resources to establish and build a strong fascist dictatorship,” said Elago.

She said Duterte intends to reward the military and the police for carrying out the counterinsurgency program Oplan Kapayapaan and the government’s war on drugs, Oplan Double Barrel Reloaded “that only resulted to the deaths of thousands of Filipinos.”

Like the past administrations the Duterte administration has chosen to prioritize the military budget, she said, adding that in the 2018 national budget the government has increased the budget on waging war against the people and slash the budget for social services.

“The increase in salary is the last push of the Duterte administration to boost the morale of its troops to continue the killings. Just as Pavlov’s dog was conditioned with the sound of a bell, Duterte is conditioning the military and uniformed personnel that the more people they kill, the more they will be rewarded,” she said.