You Are Here: Home → 2017 → November → 23 → Conditions that led to Ampatuan massacre still present

Five journalists have been gunned down under the Duterte administration, bringing to 178 the total of media killings since 1986, the restoration of democratic institutions.

MANILA – The massacre that shocked the world eight years ago remains unresolved to this day.

The families of the 58 individuals –of whom 32 were journalists– killed by gunmen of a powerful clan on November 23, 2009 in sitio Masalay, barangay Salman, Ampatuan, Maguindanao, still cry for justice.

According to the National Union of Journalists of the Philippines (NUJP), of the 198 suspects in the massacre, only 115 have been arrested and 112 have been arraigned. Four of those arrested have died in the course of the proceedings, including primary suspect Datu Andal Ampatuan, Sr. 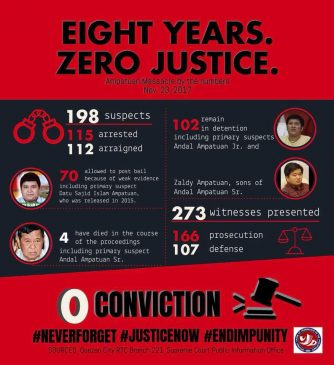 As of July 11 this year, 102 of the accused remained in detention, including main suspects former Datu Unsay town mayor Andal Ampatuan, Jr.; former Autonomous Region in Muslim Mindanao governor Zaldy Ampatuan; and Chief Insp. Sukarno Dicay, police chief of the 15th Regional Mobile Group that was conducting the checkpoint when the incident happened.

The NUJP lamented that journalists continue to be murdered with impunity, blaming the “rotten system of governance that afflicts our country.��

Five journalists have been gunned down under the Duterte administration, bringing to 178 the total of media killings since 1986, the restoration of democratic institutions.

The NUJP pointed out that “a governance of expediency by which all presidents…court the loyalty of the warlords, crime lords and corrupt clans… allows clans like the Ampatuans to flourish and wield power they actually believe they can literally get away with murder.”

Cristina Palabay, Karapatan secretary general, cited the alleged armed groups formed as death squads and ‘gun-for-hire’ for the regime’s ‘wars’ against the people and the formation of Kilusang Pagbabago-Masa Masid from public funds.

Karapatan called for the dismantling of private armies and paramilitary groups.