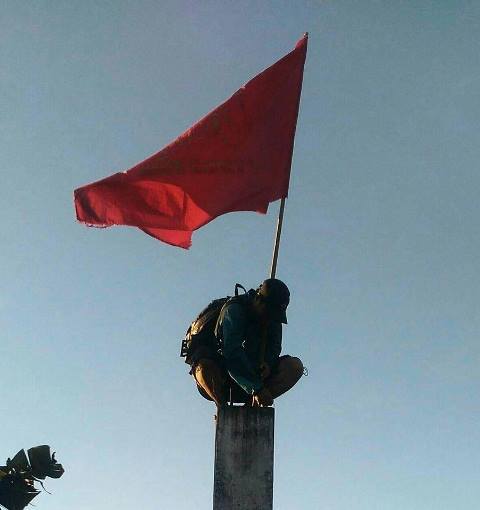 “This is a test case for the Duterte administration to bare its resolve in ending contractualization through strong intervention.”

MANILA – As the Duterte administration released a new Department of Labor and Employment order regulating contractualization on March 16, some long-time contractual workers who were anticipating their regularization in a Korean-owned fruit corporation in Mindanao’s Compostela Valley found to their dismay that they were being terminated instead.

On April 6, they launched a strike to demand not just their old jobs back but also their regularization under their actual employer, the Korean-owned Shin Sun Tropical Fruit Corp.


Fifty-three workers of Shin Sun in San Miguel, Compostela, Compostela Valley have worked from two to seven years in the company. After six months of continuous work they should have been regular on the job as per the Labor Code, but they were contractual workers of labor agency ECQ Serve Human Resources. It is one of the many labor agencies used by companies in the banana industry in Mindanao to fill in their labor requirements, the Kilusang Mayo Uno in Southern Mindanao said in a statement.

After the banana workers in Shin Sun Tropical Fruit Corp. succeeded in forming a union, they pushed the labor department to inspect their workplaces and the illegal contractualization happening there. Following the inspection, the labor department declared that indeed, ECQ Serve Human Resources was engaged in the prohibited Labor-only Contracting (LOC). As per the law, this means the affected workers are regular workers and their actual employer is Shin Sun.

Based on the Labor Code, if a company hires a labor-only contractor, the company (principal) will be considered the employer of the employees of the contractor.

The Duterte administration made much of its promise to end contractualization including the likes of the case of the banana workers in Mindanao. Labor Secretary Silvestre Bello III conferred first with employers’ groups and held dialogues and summits with labor leaders, offered drafts and reworked it to craft the Duterte administration’s new contractualization policy. On March 16, it issued its final version, the Department Order 174, a supposed response in line with Duterte’s campaign promises. Similar to past contractualization policies, it affirms the ban on labor-only contracting.

But what can this ban really do for long time contractuals especially those who have succeeded in exposing an actual practice of illegal contractualization? This is what the strike of banana workers in Shin Sun wanted to test and see.


As per DO 174 the workers under ECQ labor agency should have been declared as employees of Shin Sun. According to Carl Anthony Olalo, secretary general of KMU Southern Mindanao, the Shin Sun workers’ strike is the first strike launched in the region following the release of the much-hyped Department Order 174 which promised to end labor-only contracting.

“This is a test case for the Duterte administration to bare its resolve in ending contractualization through strong intervention,” said Olalo.

Shin Sun dismissed 80 including the 53 unionized workers on March 16, then hired contractuals under another labor agency, Human Pros Manpower Agency. South Korea was the third biggest buyer of Philippine bananas. In 2015 it bought around 12 percent of the country’s total banana exports, consuming $51.6 million worth of bananas from the Philippines.