“Why did the ERC allow Meralco to increase its rates when it can’t even tell us the kind of alternative fuels that were used, its cost per unit and the quantity used during the two and a half week shutdown?”

MANILA – Despite having been at the center of a corruption controversy last November, the Energy Regulatory Commission (ERC) is fueling suspicions again of possibly another case of corruption or failure to do its job. As the regulatory body put in place despite the privatization and deregulation of the power sector under the EPIRA (Electric Power Industry Reform Act), it is the ERC’s mandate to ensure that private entities do not violate the public’s right to affordable electricity. But every year, the ERC earns the public ire for allowing dubious power rate hikes.

Last November, after the then ERC Director Francisco Villa Jr. committed suicide due reportedly to feeling depressed and pressured with the rampant corruption in his office, President Rodrigo Duterte publicly asked the ERC officials to resign. These officials stayed on the job, however, with some responding to the president’s order by just taking a month’s leave.

This March, the ERC is in hot water again with consumers’ groups for three reasons: (1) it has allowed Meralco to raise its rates without public hearings; (2) it rendered public hearings moot and academic as it issued the order allowing Meralco to raise rates on March 6, but started the public hearing only on March 14; and (3) no ERC commissioners attended or presided over the said public hearing, and the representatives they sent failed to give information on the why’s and how’s of the latest rate hike. 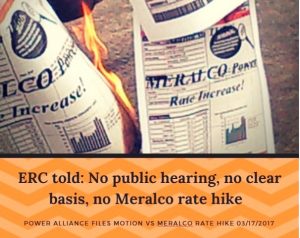 These are all wrong, according to the consumer group People Opposed to unWarranted Electricity Rates (POWER) and the Advocates of Science and Technology for the People (Agham), which earlier filed a petition opposing the rate hikes.

The case and reasoning is the same as in the 2013 historical Meralco rate hike approved by the Energy Regulatory Board, but massively opposed by consumers who succeeded in securing a restraining order from the Supreme Court.

Until today, Bayan Muna Rep. Carlos Isagani Zarate said “the ERC investigation report on the collusion in the 2013 Malampaya shutdown and power rate hike is still to be completed and reported to the public.”

The public hearing last March 14 could have answered questions of consumer groups such as if the rate hikes were justified and computed correctly, and if Meralco had the right to pass on its alleged additional fuel cost to consumers. But the representatives sent by ERC and Meralco failed to give information on the kind and quantity of alternative fuel actually used by the three power plants, and its cost for the two and a half week period covering the Malampaya shutdown, said Teddy Casiño, convenor of POWER.

“Why did the ERC allow Meralco to increase its rates when it can’t even tell us the kind of alternative fuels that were used, its cost per unit and the quantity used during the two and a half week shutdown?” Casiño asked.

Workers’ groups picketed in front of select Meralco offices to protest the latest rate hikes. In Sta. Rosa, Laguna, Allan Bagas, secretary-general of Pamantik-KMU, urged fellow workers to join the protests against the rate hike and the law, the EPIRA or Electric Power Industry Reform Act, which, he said, allows the likes of Meralco to increase power rates.


Under EPIRA, the entire energy industry was privatized and deregulated. Agham said the EPIRA effectively removed the ownership, management, and control of the State in the energy sector, making it possible for private companies to conspire in different schemes to increase electricity rates.

Following the privatization of power companies, power rates have risen several times, and so have the profits of power companies. Meralco, for example, has reportedly profited more than double the 12 percent reasonable return limit ruled by the Supreme Court in 1966, reiterated in 2002, and affirmed in 2003.

“Karamihan na nga sa amin ay kontraktwal na sumasahod ng napakaliit na minimum wage o higit na mas mababa pa, nagkakaroon pa ng mga pagtaas sa mga gastusin at bayarin gaya ng pamasahe at ngayon naman ay sa kuryente.” (Most of us are contractuals earning a very meager minimum wage or even lower than that, then on top of this here comes the hike in fees and rates such as of transportation and now, of electricity.)

On Friday, March 17, the ERC will hold another hearing on the rate hike it had already approved. POWER said it would file also this Friday a Motion for Reconsideration seeking to cancel the ERC’s March 6 provisional authority that allowed Meralco to increase rates.