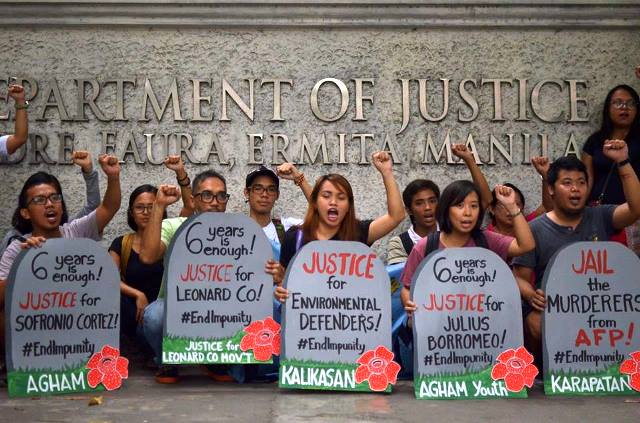 In 2012, the DOJ recommended the filing of a (downgraded) case of reckless imprudence resulting to homicide.

MANILA – Five years ago, Linnae Marie Flores Co, 10 years old at the time, told Bulatlat, “Sana, magkaroon na ng hustisya ang pagkawala ng Daddy ko.” (Hope there’d be justice already for my dad who’s gone now.) She could not bring herself to speak of his death. “He’s gone,” she would simply say, and there has to be justice for that.

She told Bulatlat that the first evening her mother was gone to see her father, and she failed to come back until the next morning, her mother also could not bring herself to tell her what happened.

The occasion when Linnae shared this was the first death anniversary of Leonard Co, her father.

Leonard Co was an eminent Filipino botanist. The person to call, according to his colleagues at the University of the Philippines, to answer plant-related questions by visiting experts. In a world where universities are losing government funding, plant collections are closing and graduating botanists are getting fewer, Co and his crew, while doing fieldwork in the forested mountain of Kananga, Leyte, were fired upon and killed by government soldiers.

The state troops said they had an encounter with the New People’s Army (NPA). But evidence unearthed in investigations in 2010 reportedly showed that Leonard Co, and his colleagues Julius Borromeo and Sofronio Cortez, were killed by guns fired from a higher part of the forest. No one else was reported to be in that position at the time but soldiers of the 19th IB of the Philippine Army.

Six years later, the Kananga Three’s family and friends are still calling for justice. The last six years are “six years of injustice and impunity” to them. To Kalikasan-PNE, it is six years of “drought” in terms of meaningful action to pursue justice in the killings.

In a statement, Feny Cosico, secretary general of scientist group AGHAM (Advocates of Science & Technology for the People) and spokesperson of the Justice for Leonard Co Movement Friends, described the actions that have been taken so far by the government as mere tokenism.

In marking this Tuesday, November 15, the sixth death anniversary of the Kananga Three, their families and friends, together with Kalikasan-PNE and Agham, picketed the gates of the Department of Justice.

In 2010, following the outcry in the first killing of an environment defender and a prominent botanist to boot, investigations into the killings were conducted. By December 8 that year, it was determined from the trajectory of the bullets that it had come from the same location. It thus belied the Army claims that there had been an encounter with the NPA and the botanist’s team was just caught in the crossfire.

From February to July in 2011, the Department of Justice under then Sec. Leila de Lima held ocular investigations after many hearings about the “encounter.” But until the first death anniversary of Kananga Three, it still had not released a report.

In 2012, the DOJ recommended the filing of a case of reckless imprudence resulting to homicide.

While it confirmed a wrongdoing on the part of the military, it constituted a “downgrade” of their crime, Agham’s Cosico said in a statement.

In 2013, Leonard Co’s family filed a petition for review to elevate the case to murder. But until now, Cosico said, the family’s appeal has been left on the backburner.

Worse, she said, the succeeding efforts to allay the difficulty of the survivors’ family in pursuing justice – such as their petition to the Supreme Court requesting a change of venue for hearings from Leyte to Metro Manila – have also been bogged down.

Cosico said that for six years, the Co family, together with the members of the Justice for Leonard Co Movement, have been trooping to the Department of Justice (DOJ), Commission on Human Rights (CHR), and the House of Representatives. They sought dialogue with the agency heads and legislators to speed up the resolution of the case.

Now, the group of nationalist scientists and environmentalists are urging the Duterte administration “to end the culture of impunity involving the state forces to the innocent civilians who are rendering services to the country and the communities.”

Clemente Bautista, the national coordinator of Kalikasan PNE, said the administration of President Rodrigo Duterte has yet to concretely challenge the persisting climate of impunity against environmental defenders. He dared the DOJ to start on it, to show that indeed, it is taking the issue of human rights seriously, by making an effort to reopen and resolve the six-year case of Leonard Co and the rest of the Kananga Three.