You Are Here: Home → 2016 → October → 19 → Health workers to file complaints against Fabella management

MANILA — The Alliance of Health Workers (AHW) and the Save Fabella Hospital Movement (SFHM) will be taking action on what they call as military siege in the Dr. Jose Fabella Memorial Hospital last week.

Sean Herbert Velchez, AHW spokesperson said in a press conference on Monday, Oct. 18, that they are drafting a complaint to be submitted to the Commission on Human Rights. They also plan to file a case against the hospital management and Health Secretary Paulyn Jean Rosell-Ubial for grave abuse of authority for mobilizing soldiers to transfer hospital equipment without proper authorization or hospital order.

Elvira Mendoza, spokesperson of the SFHM was injured when she was pushed aside by one soldier when she demanded authorization papers for the transfer of the hospital equipment.

He added that the transfer of the hospital is “a hypocritical move” as the management and the Department of Health is bent on abolishing the maternity hospital to make way for commercial use of the land, as well as privatization of Fabella hospital. Once some departments of the hospital are transferred to the Lung Center of the Philippines compound, Velchez said, the management’s next move would be to abolish the hospital.

Velchez said the use of soldiers is a desperate move to downsize the bed capacity of Fabella hospital. He said lessening the bed capacity of the hospital would result to more maternal mortality for poor women who would not have access to an affordable maternity hospital. 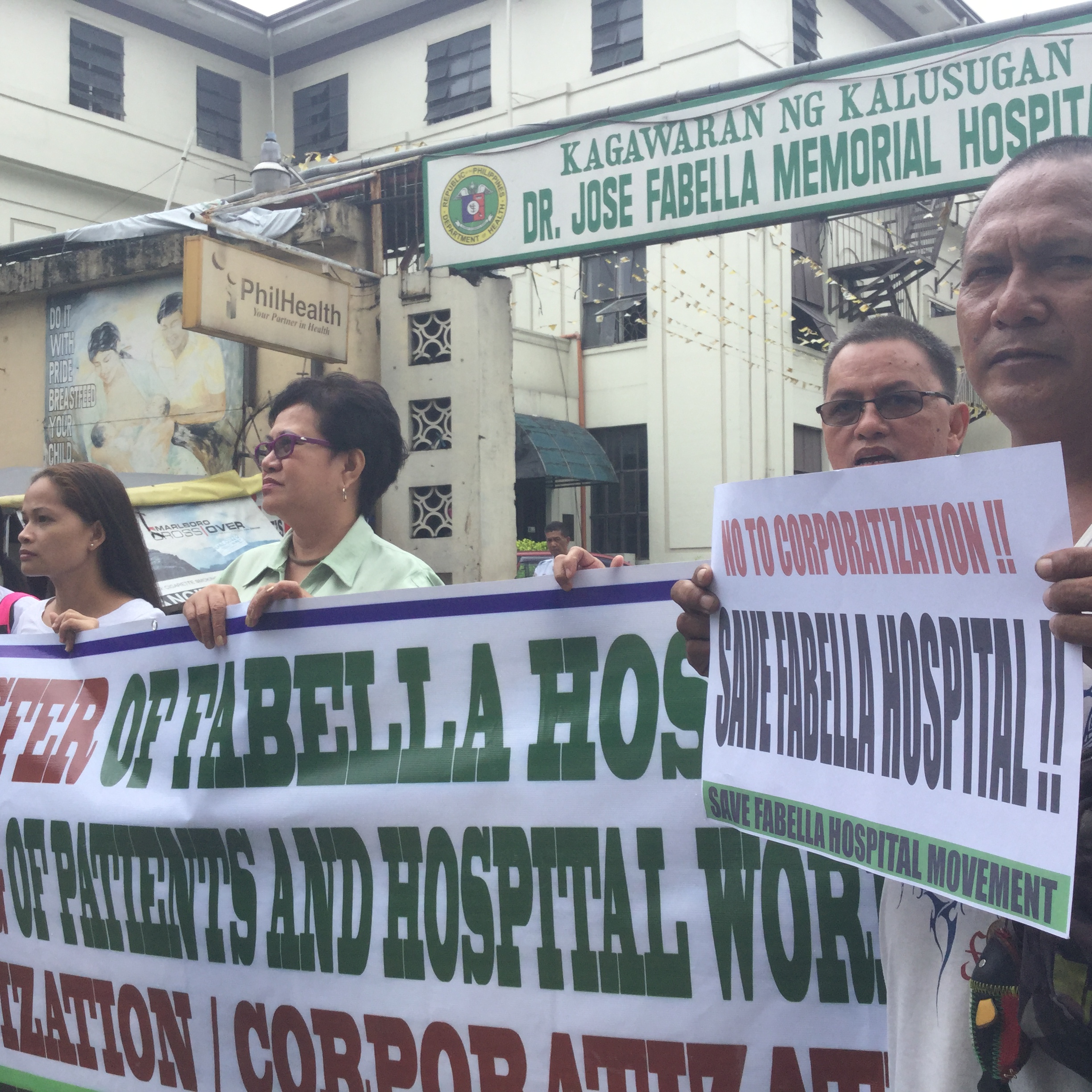 The SFHM obtained a letter dated Aug. 10, 2016 signed by Secretary Ubial and addressed to Fabella hospital director Dr. Esmeraldo Ilem, approving proposals to downsize the bed capacity from 700 to 200.

The letter also gave an order to “make the three-storey out-patient department building at the Lung Center of the Philippines compound for a 150-bed level three facility of Fabella hospital; delay hiring of vacant positions until completion of the new Fabella hospital; conduct post-training and monitoring evaluation of personnel and to transfer the office of the Medical Center Chief, School of Midwifery, Hospital Operations and Patient Support Service, Finance Service, Professional Training, Education and Research Service, and the Commission of Audit Field Office.”

During the budget hearing in the House of Representatives, Ubial said the Fabella hospital will only be transferred to the DOH compound by 2018. But the opposite happened with the soldiers’ presence last week.

Rodel Aala, Fabella hospital employee said Dr. Ilem has told them in previous dialogues that the problem stems from the land issue.

The House Guaranty Corporation owns the land where the Fabella hospital and Manila City Jail is located. The agency has written a demand letter dated Sept. 4, 2015 to then Fabella Hospital Director Dr. Ruben Flores to vacate the Old Bilibid Compound. The HGC threatened to take legal action against the hospital if they failed to vacate the compound.

Velchez said the military presence in the hospital is a threat to silence employees who are vocal about their opposition against the hospital’s transfer.

But Aala said that they will not back down in their struggle, as they are fighting not only for their rights as employees of the hospital but also poor mothers’ right to free health services. For now, Aala said Ilem agreed not to transfer any hospital equipment.

Since June 9 of this year, the transfer of the hospital was blocked by the residents from nearby communities and Fabella employees under the SFHM and AHW.

“With a corporatization mindset and a steady denial that it is towards privatization, no change is really coming at the DOH,” said Health Alliance for Democracy secretary general Dr. Joseph Carabeo in a statement.

“More and more desperate measures are in the offing, and our only antidote is continuing the struggle for a comprehensive, progressive and strengthened public healthcare system,” Carabeo added.