“Giving Marcos a hero’s burial sends a wrong signal that crimes against humanity and plunder will be celebrated by the state.”

MANILA – Public opposition continues to build up as the Duterte administration prepares to bury the remains of ousted dictator Ferdinand Marcos at the Libingan ng mga Bayani (LNMB) on Sept. 18.

Various lawmakers, groups and even government agencies, such as the National Historical Commission have spoken out against giving a hero’s burial for Marcos, which they said equates to an exoneration of the Marcos family’s crimes against the people, and brings them closer back to power in Malacañang.

This week, Inquirer.net reported that Malacañang released a memo from Defense Secretary Delfin Lorenzana, dated Aug. 7, ordering the Armed Forces of the Philippines to draft the plans for the transport and interment ceremony of Marcos’ remains in the LNMB. The memo referred to a verbal order given by Duterte on July 11. During his electoral campaign, Duterte had said he will allow the burial of Marcos at the Libingan ng mga Bayani.

In Congress, progressive lawmakers filed House resolution 197 opposing the move, calling it a “monumental historical distortion,” as giving a hero’s burial for Marcos sends “the absurd message that the Filipino people overthrew a ‘hero’ during People Power I and that the international community’s sympathy for that uprising is wrong.”

Marcos died in exile on Sept. 28, 1989 in Hawaii, where his family was flown by the US government to escape the first People Power in 1986. In September 1993, President Ramos allowed the repatriation of the dictator’s remains, but refused to give him a hero’s burial.

Marcos’ remains has since been preserved and kept on display in a refrigerated glass coffin in the Marcos Museum and Mausoleum in Batac city, Ilocos Norte.

The proposed house resolution said the Marcos family signed an agreement with the Ramos administration, which allowed the repatriation of the ousted dictator, on the following conditions: it will be brought home without fanfare; it will be buried in Ilocos Norte, and with military honors only up to the rank of major.

The Makabayan proposed resolution cited the human rights violations from 1976 to 1983, that “formed the apex of a pyramid of terror:” 3,257 killed, 35,000 tortured, 70,000 incarcerated, 737 Filipinos “disappeared” from 1976 to 1983. During martial law, the word “salvaging” came to mean summary execution, as mutilated bodies were dumped in public areas. Up to 2,250 salvaged victims were documented, “dumped on roadsides for public display to create widespread fear.”

The proposed resolution also cited how Marcos plunged the country into a “cycle of ever-growing debt,” as foreign debt had ballooned, from $1 billion in 1966 when Marcos took power, to $28 billion in 1986 at the time he was ousted. Ibon Foundation said debts incurred under Marcos alone will be shouldered by Filipino taxpayers up to 2025. On the other hand, the late Solicitor General Frank Chavez estimated that Marcos had up to $13.4 billion stashed in various Swiss banks.

“Marcos and his family have never acknowledged these grave violations and have never apologized to the Filipino people up to the present,” the resolution said. 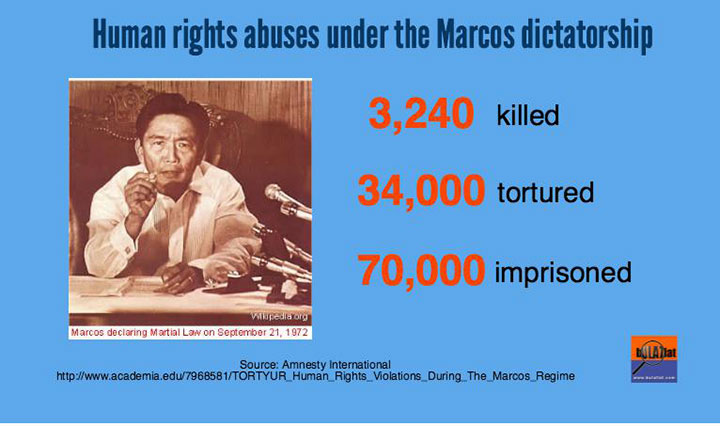 During this year’s elections, martial law victims formed the Campaign Against the Return of the Marcoses in Malacañang (Carmma) to thwart the vice presidential bid of Ferdinand “Bongbong” Marcos Jr. The younger Marcos lost to administration bet Leni Robredo by a small margin of votes, and has recently petitioned for a recount.

This weekend, various groups are staging protests against the Marcos burial: at the National Council of Churches in the Philippines in Quezon City on Aug. 13, and in Luneta, Manila on Aug. 14.

The Bagong Alyansang Makabayan (Bayan) scoffed at the reported bronze casket being prepared for Marcos’ remains, in stark contrast to how hundreds of martial law victims, the desaparecidos, were “abducted, murdered and buried in unmarked graves.”

“The wealth illegally amassed by the Marcoses will again be used to ‘honor’ the late dictator, in the same way it is used to whitewash his sins. State honors and the Marcos family’s ostentatious display of wealth are doubly insulting to the victims of the dictatorship,” said the Bayan statement.

The youth group Anakbayan called the impending burial a “travesty of justice and distortion of history,” as they said the Marcos dictatorship has yet to pay for the thousands of youth activists, “the cream of the crop” who were killed for fighting martial law.

“It does not matter if the Libingan ng mga Bayani was originally a cemetery for soldiers, one of Duterte’s justifications for burying Marcos there as a soldier. Giving Marcos a hero’s burial sends a wrong signal that crimes against humanity and plunder will be celebrated by the state,” said Vencer Crisostomo, Anakbayan chairperson, in a statement.

“We are reminding President Duterte not to use his office simply to give favors to those who supported his electoral campaign. The Marcos burial, in particular, should not be made just to repay political debts to his close friend Bongbong Marcos,” Crisostomo said.

The Alliance of Concerned Teachers said a hero’s burial for Marcos equals “rewriting history” and insults martial law victims and their families.

“It took a people’s movement to topple the late fascist-dictator Ferdinand Marcos. To honor his memory by burying him in the Libingan ng mga Bayani sends a distorted message to our children that dictators and plunderers can be called heroes and accorded honors,” said ACT national chairperson Benjie Valbuena.