Former Bayan Muna Representative Neri Colmenares said Congress should pass a law that will simplify tax brackets, reserve the highest tax rate to those earning more than P2.7 million (US $57,212) a year. He added that those earning below P33,000 ($670) per month should be exempted from tax so as to maintain the living wage per family pegged at P,1086 ($23) per day.

Colmenares was the principal author of House Bill 3501, one of the tax reform measures disapproved by Pres. Benigno Aquino in the last Congress and did not pass the committee level.

Colmenares said that the tax rate of 32 percent for an annual income of P500,000 ($10,595) was imposed way back in 1986 under Executive Order 37.  For years, Colmenares said the government refused to adjust the tax rate to inflation making middle income earners earning P41,666 ($883) a month, together with multimillionaires, pay the same 32 percent. 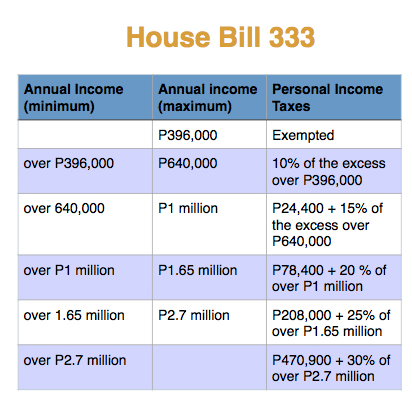 Based on the Consumer Price Index published by the National Statistics Office (NSO), it is estimated that national consumer prices have increased by 539 percent from 1986 to  2014 which means that an annual income of P500,000 is now equivalent to P2.7 million.

“We are unjustly overtaxed and underserved. Lowering income tax must not be reduced to a mere revenue issue,” Colmenares said. “This is an issue of justice”.