MANILA — The Gabriela Women’s Party (GWP) has elevated their fight for three seats in Congress in a petition for certiorari in the Supreme Court today, July 11.

This after the Commission on Election (Comelec) failed to take action on their motion for reconsideration and correction of manifest error for the proclamation of GWP’s third seat.

GWP Rep. Emmi De Jesus said they resorted to filing petition in the high court because the 30-day period within which Comelec should act on their petition, as provided by the commission’s internal rule, has already elapsed. They filed their petition on May 20.

“Gabriela and Makabayan Coalition appeal to the Supreme Court to advance the true spirit of the partylist system’s concept of representation of marginalized sectors and order the Comelec to proclaim our third nominee before the opening of the 17th Congress,” said GWP Rep. Emmi De Jesus.


In their petition for certiorari, De Jesus said they appeal to the Court “to review the judgment and final orders of the COMELEC and Commission on Audit based on the National Board of Canvassers Resolution 008-16 that failed to proclaim the third seat for Gabriela.”

The GWP garnered 1.3 million votes, ranking second among partylist groups with the highest vote in the May 9 elections. The Comelec only proclaimed two seats, which the GWP immediately protested. They said the Comelec made an error in using 59 instead of 59.5 or 60 in determining the number of seats that should be allocated to partylist organizations in the 17th Congress.

“Using 59 as the base figure for computation falls short of what is provided by law: that 20 percent, of the members of the House of Representatives should come from partylist groups,” the group said in a statement.

Last week, GWP and partylists under the Makabayan Coalition also trooped in front of the Comelec office to protest its inaction in their petition. They lambasted Comelec for its immediate resolution allowing the Liberal Party’s late submission of their Statement of Campaign Contributions and Expenditures (SOCE).

De Jesus stressed that Comelec’s delay in its decision on the petition deprives Moro and Lumad women representation in Congress, as it denies the seat for GWP third nominee Bai Ali Indayla. 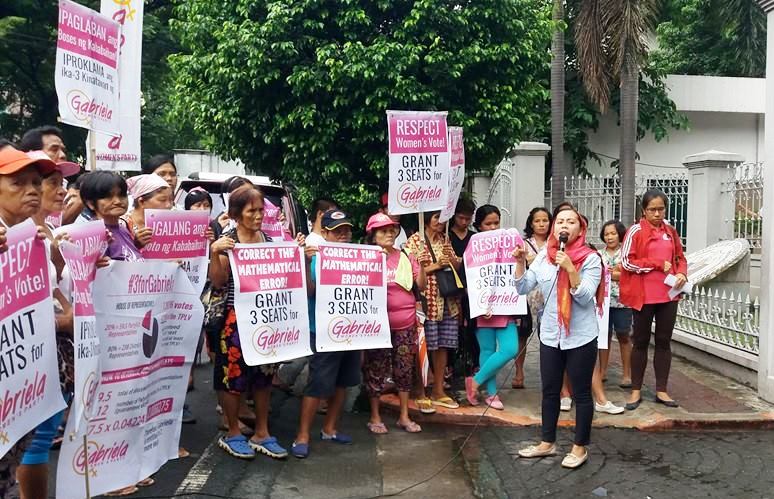 “We have repeatedly appealed to Comelec and mobilized protests nationwide, but our pleas fell on deaf ears,” said Indayla.

“I sincerely hope the Supreme Court issues the writ of certiorari to address this grave injustice for Gabriela’s 1.3 million voters and supporters worldwide and give women the voice that is proportional to their demands and dreams for a just and better future,” she added.
TEXT BY ANNE MARXZE D. UMIL
With contributed photos