MANILA – While the Department of Education (DepEd) claimed that it has committed itself to educate the youth on martial law, the progressive youth group Anakbayan said, it, in fact, further whitewashes martial law through textbooks of its K to 12 program.

In an emailed statement, Anakbayan chairperson Vencer Crisostomo said the modules they have downloaded from the DepEd’s Learning Resource Management and Development System even glorified the Marcos era. 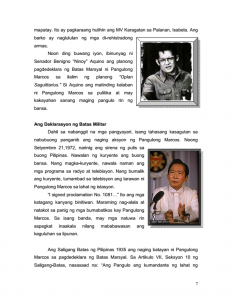 “The DepEd module upholds the claim that there was ‘development’ during Martial Law. Meanwhile, (it gave) no example and articulation of the acts of fascism and repression. The curfew implementation was even categorized as pangkatahimikan na pagbabago,” (for peace and order and change) he said.

He added that the same DepEd module “even casually mentions how the 1973 referendum legitimized authoritarian rule with 90 percent voting yes to the Marcos constitution without even mentioning how the polls were rigged and the choice was imposed on the Filipino people by force of arms.”

Earlier, Anakbayan exposed the Lakbay ng Lahing Pilipino 5 textbook for its misleading claim that the programs of the late dictator Ferdinand Marcos were implemented to uplift the lives of Filipinos, while it said nothing about human rights violations and systemic corruption during Martial Law.

As in the Lakbay ng Lahing Pilipino 5 textbook, the group noted that the DepEd module still explained the declaration of Martial Law as a consequence of Marcos’ good intention of safeguarding national security from chaotic protests and rebels rather than the late dictator’s lust for power.

The DepEd said the book in question “is not a DepEd-issued textbook and is being used by private schools.”

On the restoration of democracy

Anakbayan also pointed out how DepEd’s “Araling Panlipunan I Modyul 18: Ang Pilipinas sa Panunumbalik ng Demokrasya” airbrushed the role of the Filipino people in fighting the Marcos regime, as if the anti-dictatorship struggle was only about the late Aquino couple — Ninoy and Cory.

“President Aquino always keeps on hitting the Marcoses to gain political mileage and yet his very own DepEd and its revisionist ‘miseducational’ materials are the biggest culprit for the perpetuation of historical amnesia among our younger generations,” he said.

The group questioned the absence even of just the “milestones” in the resistance to Marcos, like the La Tondeña Strike, the student movement for the revival of student councils and papers, and the sacrifice of prominent martyrs, like Lorena Barros, Edgar Jopson, Macli-ing Dulag, Dr. Bobby La Paz.

Crisostomo said they are alarmed at how Philippine contemporary history is being refashioned to become the story of two landed families and a few powerful personalities.

“We will not allow both the Marcoses and the Aquinos to reshape our history as the narrative of the fall and resurrection of their dynasties’ political fortunes,” he said.

The DepEd said it emphasizes that with the implementation of the K to 12 Program, curriculum guides for Grades 5 and 6 Araling Panlipunan have been designed to allow for more in-depth and enriched discussion on Philippine History which will include the Martial Law period.