‘If Aquino and SSS execs were real public servants, pension hike is feasible’

“The accumulating funds and properties of the Social Security System all came from working people in the private sector. The government contributes not a cent into it.”

MANILA – What kind of public servants are they?

This is the question repeated over and over again in the speeches of community leaders of progressive partylist Anakpawis and of pensioners who joined a protest action Wednesday, January 20. They were referring to President Aquino and top executives of Social Security System (SSS). The latter awarded themselves millions of pesos in bonuses on top of receiving at least P3-million a year each in salaries. Yet, they refused to increase the pension of senior members by P2,000 ($42), which was already a reduction from the earlier proposal of P5,000 ($104.71). The executives and President Aquino claimed that the funds would be depleted by 2029. But the pension hike proponents believe otherwise. They countered that the government would have to implement reforms in the way they administer the workers’ funds.

In a picket protest in front of the SSS headquarters in Quezon City, protesters not only denounced President Aquino’s refusal to increase by P2,000 ($42) the monthly pension being received by SSS’s less than two million pensioners. They also enumerated various reasons why the pension hike is highly feasible. They said the Aquino administration’s inefficiency in managing the workers’ funds and its refusal to consider the interest of the SSS members stand in the way of the much needed hike.

In SSS funds, not a single centavo came from govt

“The accumulating funds and properties of the Social Security System all came from working people in the private sector. Not a single centavo came from the government,” Anakpawis Rep. Fernando Hicap said in a speech in front of SSS.

He said all the funds of SSS, from which its managers have been awarding themselves millions of pesos in bonuses each year, are the accumulation of decades of funds from workers who paid contributions in hopes that their pension could support them when they get too old to work.


But many of the country’s almost two million pensioners today are receiving only a thousand and a few hundred pesos each month.

“SSS top executives are lazy at finding ways to prolong the life of the fund,” Hicap said in response to government’s “scare tactic” about the funds getting depleted by 2029.

Based on a report from the Commission on Audit, the SSS fund managers seemed to have been neglectful of their job – at least in ensuring the growth of SSS funds and benefits for its members.

Contrary to SSS executives’ rosy reports of good fund management, which they cited as reason for granting themselves fat bonuses, the SSS has been collecting only 30 to 40 percent of what it should have been getting based on current premium levels.

In 2014, the COA said about 97,000 employers failed to remit workers’ SSS contributions amounting to P8.16 billion ($171 million). In the National Capital Region, the COA pegged the combined amount of delinquencies in premium contributions and penalties at more than P5 billion ($104.7 million). 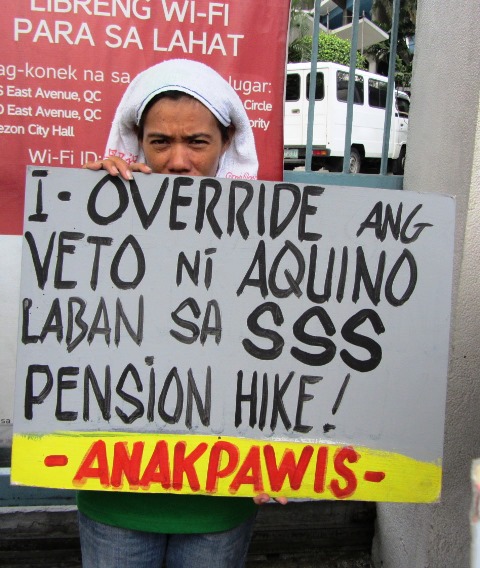 Hicap said the Aquino administration, including its highly paid SSS executives, has neglected to pursue cases against the delinquent employers. In fact, in a report today, an executive was quoted as saying that they are now mulling over the possibility of increasing the pension by a smaller amount, but in exchange for an increase in premium contributions.

As such, as in last year’s hike in SSS premium, workers groups are expected to nix the floated hike in premium, on the ground that it would be more burdensome to workers.

Proponents of pension and wage hikes have consistently maintained that if only the SSS would run the workers funds efficiently, it could increase members’ benefits without increasing the burden to its current paying members.

Aside from improving collection efficiency, for example, SSS has been told to work at earning from its funds and properties.

The SSS is sitting on properties that should have been earning revenues but for some reason are not. Based on the COA report for 2014, as cited by Anakpawis in its statement to the media, SSS has a foregone income from rent amounting to an estimated P198.2 million ($4.151 million). SSS owns 102 condo units in seven condominium buildings worth about P18 billion ($377 million).

Of the 15 office condo units owned by SSS, only one unit is being rented, said the COA report.

Aquino an ‘expert at denying the people what is due them’

Anakpawis also scored the “predilection” of the Aquino government to pit the working people and masses against each other in order to force down their throats certain anti-people measures.

In a reaction to another reported excuse from Malacañang that claimed the pensioners would no longer receive their pensions by 2029 if the P2,000 ($42) across-the-board pension hike was signed into law, Hicap said that is “an old one.”

He recalled that that is the same “divide and rule” tactic employed by Malacañang last year to justify the fare hike in LRT and MRT. Malacañang said the taxpayers in Visayas and Mindanao are not benefiting from the said railways yet public funds are being used to subsidize the trains.

This time, Hicap said Malacañang is pitting today’s pensioners against the future pensioners.

But in both issues, Hicap said the main victims are the common working people who are all paying taxes and SSS premiums – yet, they are forced, in return, to make do with deficient and downright dangerous services, and paltry pensions and benefits. On the other hand, the executives in SSS, the private corporations who cornered the MRT and LRT deals and the top executives in the transportation departments and agencies, are playing with millions to billions of people’s money, Hicap said.

The Anakpawis lawmaker dared the SSS executives to prove that they are real public servants, to sacrifice their desire for hefty paychecks and bonuses, to stop receiving these from SSS and return those they’ve previously received.

Anakpawis cited Republic Act No. 8282, Section 2, which states: “It is the policy of the State to establish, develop, promote and perfect a sound and viable tax-exempt social security system suitable to the needs of the people throughout the Philippines which shall promote social justice and provide meaningful protection to members and their beneficiaries against the hazards of disability, sickness, maternity, old age, death and other contingencies resulting in loss of income or financial burden. Towards this end, the State shall endeavor to extend social security protection to workers and their beneficiaries.”

Hicap said they in the Makabayan bloc will strive to urge Congress to override President Aquino’s veto of the P2,000 ($42) pension hike bill. He admitted that it is a very difficult thing to do, as Congress is made up of President Aquino’s allies. But with prodding from the people and the voters, he said, they and the public will give it a try.