“The regime’s monstrosity, which spares not even children, speaks of the evil tactics of the counterinsurgency program of Aquino, Oplan Bayanihan.”

MANILA – The brutal killing in Lianga, Surigao del Sur last Sept. 1 had shook the world. But that was neither the beginning nor the end of it.

For human rights activists, President Aquino’s six years of so-called “tuwid na daan” or straight path has resulted to at least 14 massacres and hundreds of victims of extrajudicial killings, including 28 children. Last Dec. 10, the International Human Rights Day, progressives took the parliament of the street to hold the government accountable for such unabated human rights violations in the country.

The human rights group documented 304 cases of extrajudicial killings as of Nov. 30, 2015. There are also 561 political prisoners who continue to languish in jail. At least half of them or about 304 were arrested and detained under Aquino. 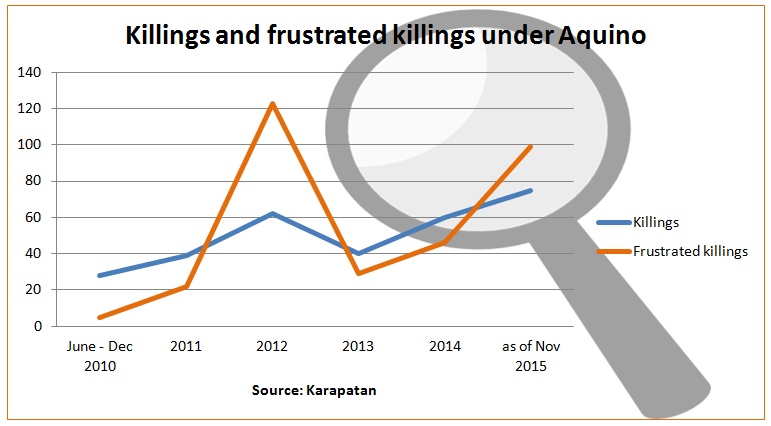 The killings under the Aquino administration, though substantially lower than that of its predecessor former president Gloria Macapagal-Arroyo, remained persistent under the so-called “straight path.” The 304 documented extrajudicial killings in the country is a far cry from Aquino’s claim back in 2014 that there is only one case of extrajudicial killing under his administration.

There are 26 documented victims of brutal killings, which showed the “monstrosity of the regime,” according to Karapatan. There are also 14 cases of massacres, which claimed the lives of 49 civilians, seven of them, minors.

Three more massacres took place that year – in Mobo and in Daraga, both in the Bicol Region, and in Kananga, Leyte. The latter took the lives of renowned botanist Leonard Co and his companions Julius Borromeo and Sofronio Cortez.

“You wil know how heartless a government is when even children have become targets of its counterinsurgency program – their schools are used for military encampment, destroyed or burned; or their teachers, fathers, mothers, brothers harassed or killed,” Cristina Palabay, secretary general of Karapatan, said.

In 2014, two cases of massacres were documented. These are the Ligiw massacre in Baay-Licuan, Abra, where the three victims, the Ligiw family, were hogtied and buried in a hole atop of each other. Four more were killed in a massacre in Caramoan, Camarines Sur.

Then, on Sept. 1, tribal leaders Dionel Campos and Datu Juvello Sinzo and Alternative Learning Center for Agricultural and Livelihood Development Executive Director Emerito Samarca were killed in Lianga, Surigao del Sur. Campos and Sinzo were both shot dead in front of residents while Samarca’s body was discovered later, his body bore signs of torture and his throat was slit from ear to ear.

The perpetrators behind the killings in Lianga, despite garnering national and international attention, have yet to be arrested. Campos’ daughter Michelle, in a press conference last Dec. 5, said the assailants, brothers Bobby and Loloy Tejero and Garito Layno still loiter in neighboring towns.

Karapatan assailed the Aquino government’s “dedma attitude” on the unabated brutal killings – so gruesome that “even the monsters would be disgusted” – resulting from its counterinsurgency program Oplan Bayanihan.

Members of the paramilitary group were recruited among the members of the community – pitting indigenous peoples resisting big mining corporations encroaching on their lands against their own relatives and friends.

“The regime’s monstrosity, which spares not even children, speaks of the evil tactics of the counterinsurgency program of Aquino, Oplan Bayanihan. The attempt to pit the people in the community against each other ‘through winning the hearts and minds’ simply sugar-coating its ‘divide and rule’ tactic,” Palabay said.

She added that the military “provides arms to those who can be used against its perceived enemies.”

Among the latest victim is Mankombite Mariano who was shot and hacked by members of paramillitary group De la Mance last Oct. 27 in Cabanglasan, Bukidnon. Mariano, who is a Lumad activist, was picking durian along with 16 others, 12 of them children, when he was shot on his left chest and left hip by a paramillitary. His 10-year-old grandson was hit in his left leg but was able to run and hide. From where he was hiding, he witnessed how a member of the De la Mance hacked his grandfather to death.

“There’s no use for the government to keep denying that the paramilitary groups are its creation because these groups obviously perform tasks along the regime’s counterinsurgency program,” Karapatan said in a statement. 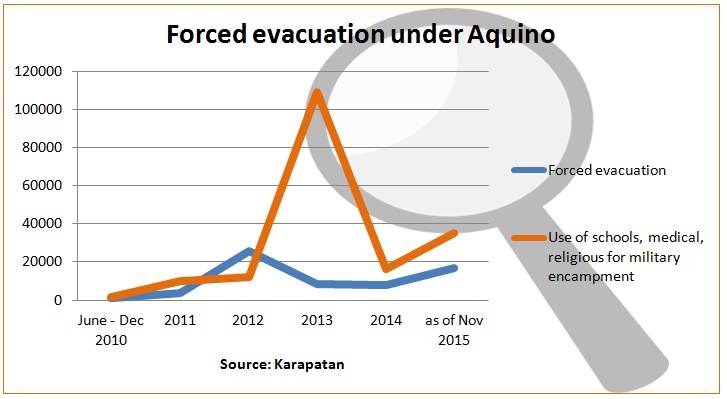 In Mindanao, the joint military and paramilitary operations have led to massive forced evacuation. There are currently some 3,000 Lumad seeking refuge at the Surigao Sports Complex in Tandag City due to the Lianga killings. In Davao City, there are nearly a thousand indigenous peoples seeking refuge at the United Church of Christ in the Philippines-Haran.

They have been subjected to harassments, threats and red-tagging from both the military and paramilitary.

At least 55 battalions of the Armed Forces of the Philippines are deployed in Mindanao. This does not include intelligence battalions, paramilitary forces and those involved in civil-military operations, according to Manilakbayan.

From November to December of this year alone, four more incidents of forced evacuation took place due to militarization in various tribal communities in Mindanao.

“These deployments only show that the warmongering Aquino administration has heightened its human rights violations of the indigenous peoples and suppression of their right to seek redress from foreign interests in our ancestral domains. It is definitely not credible to any recognition or peace award because of its blatant violations even in the face of international indignation,” Fanagel said.

No peace under Aquino

Given the dire human rights situation in the country, Palabay said “there is no, and there will never be peace” under Aquino’s proverbial straight path.

There are currently 19 peace consultants of the NDFP arrested and are now languishing in jails due to trumped-up cases even when they are supposedly protected by the Joint Agreement on Safety and Immunity Guarantees (JASIG). This year, two of its NDFP consultants Emeterio Antalan and Leopoldo Caloza were convicted of a “false murder charge.”

Palabay said the peace talks between the GPH and the NDFP have been stalled for almost five years now, with the government “dishing out all kinds of lame excuses that blocked the process.”

She said, “There will be more human rights violations, as his counter-insurgency program Oplan Bayanihan approaches its deadline and BS Aquino stubbornly refuses to sit and talk peace with the National Democratic Front of the Philippines (NDFP),” Palabay said.