‘The future of the planet is in our hands’

“The future of our climate is in peril if we allow polluter countries and companies to run the world on its business-as-usual pathway.”

MANILA – After the failure of the 21st Conference on Parties (COP21) to come up with a binding agreement to make big polluter-countries accountable for the worsening climate change, environmentalists around the planet are calling on the people to assert themselves to get climate justice.

Here in the country, climate change activists are being joined in their calls by the health-and-environment-conscious, who are also mostly from the middle class, longing for changes, from simple ones, such as less pollution and traffic, to the radical overhaul of the social system.
As COP21 ended on Dec. 12 in Paris, more than 1,000 bikers, the religious and environmentalists joined together for a solidarity “bike and march” along Roxas Boulevard in Manila.

“What (COP21) did was leave it up to the countries, the countries can do what they want,” said Dr. Giovanni Tapang, chairperson of the Advocates of Science and Technology for the People (Agham). Tapang referred to the Paris Agreement which made it only voluntary for countries to cut their carbon emissions, and other reforms.

“But we are here today, and we say that we are the ones who hold the future, that we want people first before profit, and that we will not allow this,” Tapang said.

Pastor Sol Villalon, of the Promotion for Church People’s Response and the Stewards of Creation, said the Aquino administration is accountable for even pushing for environmentally destructive projects, such as mining and coal plants, even as Filipinos are suffering from the onslaught of disasters brought by climate change.

“Let us protect our environment, because God gave this to us…the planet is not for the elite, and not for the few powerful countries to plunder,” Villalon said, at the program at Rajah Sulayman along Roxas Boulevard.

“We should all come together and fight a regime that doesn’t defend the people, but sells the natural resources to plunderers,” Villalon said.

Dr. Efleda Bautista, chairperson of People’s Surge, the organization of victims of Typhoon Yolanda (Haiyan) lambasted President Aquino for failing to stand up for the Filipino people at COP21.

“He (Aquino) didn’t say anything about Yolanda, as if Yolanda did not happen, when Yolanda was an epitome, a sign that climate change is real. He could have emphasized on that to prove his point and say that climate change should be taken seriously by all countries, specially the capitalist countries who are polluting the world with their industries and their never-ending production,” Bautista said.

Standing up for the environment

Biking enthusiast Pablo Lucero said he joined the bike ride, to “kill two birds with one stone: to support the cause, while getting exercise.” 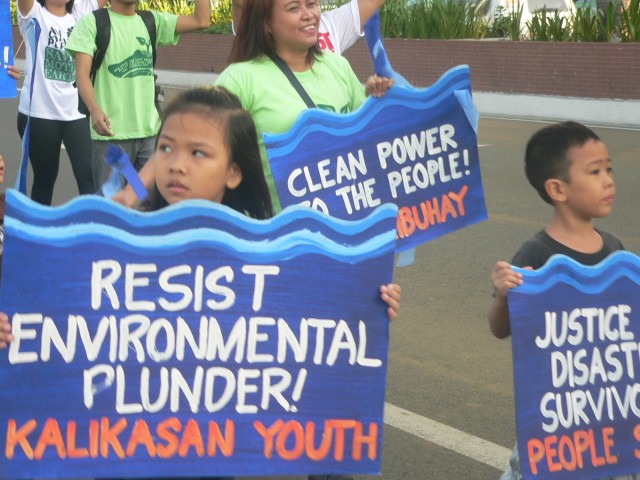 Various groups of biking buffs led by Bikers Unite showed up for the climate justice bike ride, which took off at past 6 a.m. from the University of the Philippines Diliman in Quezon City, for an hour-and-half ride to Rajah Sulayman park.

“We also have to look into issues such as climate change…the inability of government to address issues for the benefit of the people,” Lucero said. He said a myriad of problems are connected with getting climate justice, such as lack of government urban planning, lack of social services, specially to those affected by typhoons and disasters. He said there is a need for social change to address climate change.

Another biker, Shelvert Bernal, 24, said he joined to be part of promoting biking, as well as expressing concern about climate change. “Traffic is worsening. It’s good to promote biking, for less pollution, specially now that there is climate change,” he said.

Both Lucero and Bernal said they have joined other bike rides to support various calls, whether environmental or political.

Leon Dulce, of the Kalikasan People Network for the Environment said people’s movements globally are linking together and “escalating actions” to say, “The future of our climate is in peril if we allow polluter countries and companies to run the world on its business-as-usual pathway.”

Dulce said said the 2016 national elections in the country is an opportunity to raise environmental reforms, but the fight for climate justice is just part of the fight for social change.

“We challenge the Filipino people to scale up the opposition to coal power plants, big mines, and plantations, and these issues should figure in the upcoming national elections through a people’s climate platform. Beyond COP21 and the elections, we should assert the people’s control and governance in the various frontline communities through resolute, militant struggle,” Dulce said.