Tanduay Rhum makers to camp out in front of Labor Dept 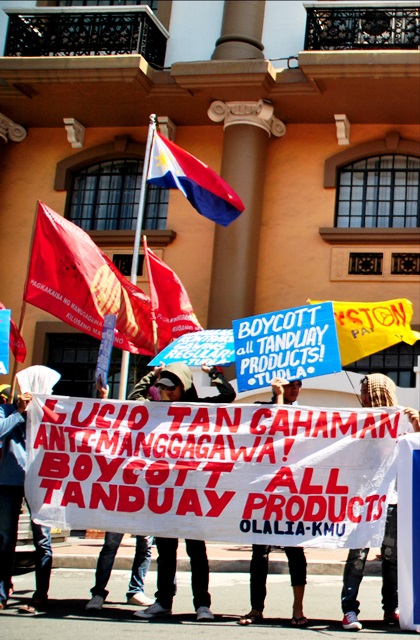 Labor department’s decisions ordering the Lucio Tan company to regularize workers have yet to be enforced.

MANILA – Workers of Lucio Tan-controlled Tanduay Distillers Inc. who went on strike early this year for regularization on the job are set to hold a camp-out in front of the national office of the Department of Labor and Employment (DoLE) at Intramuros, Manila Thursday, November 26.

Protesting their “illegal termination,” their union president, Anse Are, said the campout is one way of pushing the Labor Department to tell the business tycoon Lucio Tan to abide by the law and respect their rights as longtime workers of Tanduay.

It can be recalled that the striking workers have already gained two favorable decisions from DoLE Region IV-A and DoLE Office of the Secretary. Both decisions ordered the Tanduay management to regularize the contractual workers who have served the company from one to 10 years. But up to now, those decisions have reportedly remained unenforced.

Are said the workers have been creating Tanduay rhum and related products, which he said earned Lucio Tan P12 billion (almost $255 million) in 2012 and P10 billion ($212.5 million) in 2013. Yet, he said the contractual workers in Tanduay, no matter how long they have worked in the company, all receive P315 ($6.7) daily wage.

The workers wish also to prompt the Office of the Labor Secretary to speedily decide on their Petition to Suspend the Effects of Termination, which they filed on April. The union said in a statement that “This is one way to further push the Lucio Tan owned company to reinstate and regularize the illegally terminated contractual workers.”