You Are Here: Home → 2015 → November → 19 → Activists persisted despite the obstacles put in their way

Activists persisted despite the obstacles put in their way 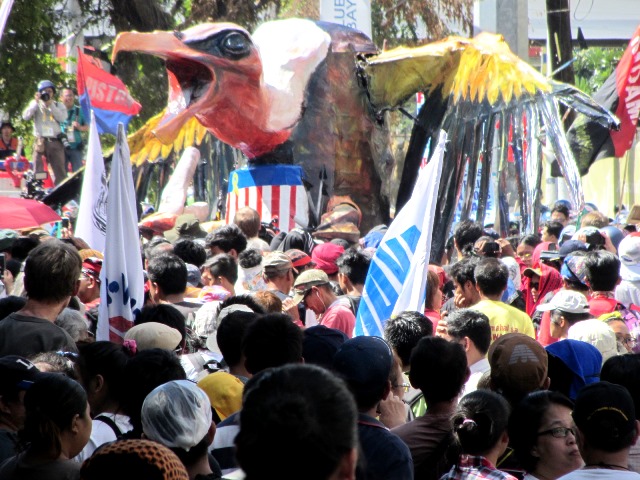 “Every problem we encountered this week, from the traffic to the marginalization of ordinary people, have been our problem since long ago – they have been magnified now because of APEC.” – Bayan

MANILA – As 21 APEC heads of state held their final meeting at the Philippine International Convention center (PICC) today, thousands of activists succeeded in marching and holding an anti-APEC program at Buendia near Roxas Blvd and PICC. The government had tried hard to block them.

The Aquino government denied them a rally permit and tried to shame them saying they are not cooperating. It deployed more than 9,200 police with truncheons and shields, with fully armed military support. It blocked the roads leading to PICC with container vans and firetrucks. It tried to threaten the global activists with possible legal cases. But the activists locked arms and with just their banners and placards, they shouldered their way against police beatings and blasts of water from at least four fire trucks. Scores were injured.

Early in the morning the police tried to prevent the march of activists who came from a vigil the night before at Liwasang Bonifacio. The activists successfully fought their way to march at Taft Ave. toward Buendia. Before they can start their program in Buendia, those already gathered there also encountered police beatings and blasts of water from fire trucks.

After they started their brief program, it was shattered by blaring music played from somewhere behind the ranks of the police and military. They refused to stop it even when the activists reminded them that they were supposed to be protecting the Filipino people, and not the foreign heads of state who were discussing ways to plunder the country. 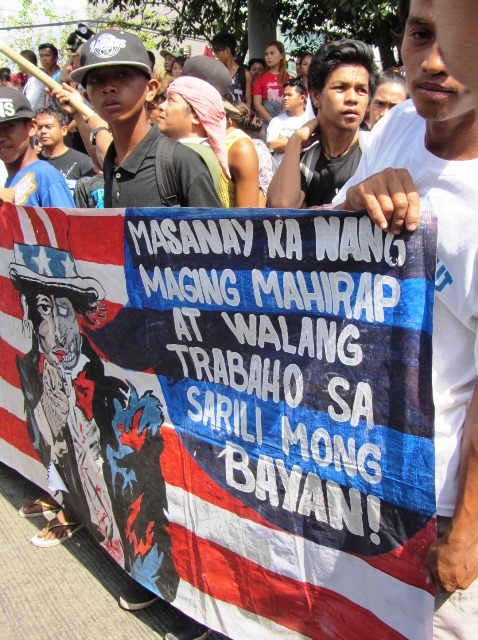 “Every problem we encountered this week, from the traffic to the marginalization of ordinary people, have been our problem since long ago – they have been magnified now because of APEC,” Teddy Casiño, spokesperson of Bagong Alyansang Makabayan (Bayan), said at the start of their program in Buendia.

He said the puppetry of the Philippine head of state is nothing new – though it is getting worse and worse.

He denounced the poverty-causing profit-hungry policies being pushed by APEC, which he blamed for the transformation even of the country’s public utilities, education and health services into businesses. He said that far from developing the Philippine economy, it has become even more backward, its people even more poor, as its industries shrink under the onslaught of globalization.

He interrupted his speech with a joke when the stage (the truck) used by activists had to be moved around because the police were beating at their truncheons.

Renato Reyes, secretary general of Bayan, said they were asserting their right to free speech, as the police threatened to terminate the gathering by force if they did not leave in 15 minutes.

The activists managed to continue with the program, but the police played loud music.

Carol Pagaduan-Araullo, chairperson of Bayan, asked the police to turn off that noise.

“Where is your ground commander? Do you know what democratic rights are all about? Do you know that there is freedom of speech!” she told the police.


Other participants tried to talk with the police, including those from Amianan Salakniban after they learned that some of the police came from the north.

In the end, the activists managed to continue their program by repositioning their stage and sound system at Buendia. The police and military continued to block the sound of protests, which are mostly in Tagalog, from reaching the APEC meeting on “inclusive” economies by cranking up their speakers.

Although many activists were drenched, the anti-APEC protesters concluded their program in good spirits. Their artists wrote their calls on walls and on the street. 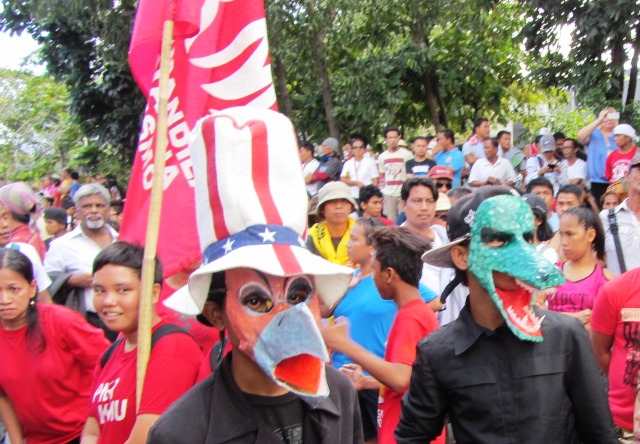 Toward the end they burned an effigy of a vulture, which, they said, represents US imperialism.

They marched back to Taft, waving their banners and placards as the police lined up along Buendia beating their truncheons again. After the activists left, more police and soldiers were deployed at Buendia and Liwasang Bonifacio to secure the area in case more people come back to protest against APEC.