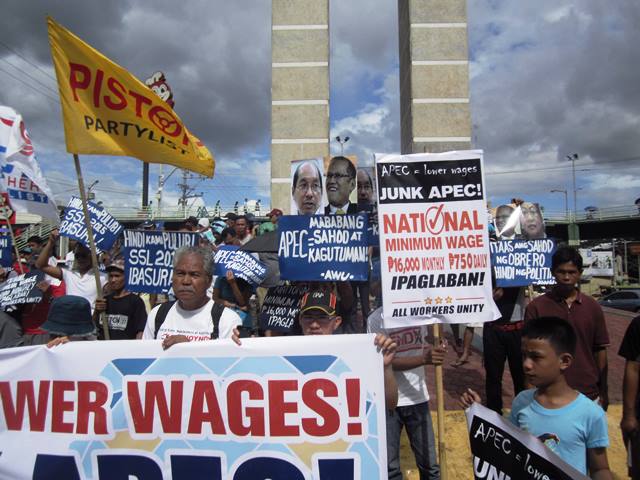 MANILA — Workers and employees from private and public sectors gathered at Welcome Rotonda, Quezon City this Monday (November 16) to express opposition to the Salary Standardization Law 2015. They said it reveals the Liberal Party-dominated government’s compliance to APEC’s inhumane policies on wage and salaries.

“SSL 2015 perfectly illustrates the Liberal Party’s ‘Tuwid na Daan’ and APEC’s unjust policy on wages and salaries: high for the few on top, low for the majority at the bottom. That’s the same policy for the private and public sectors, and for agricultural workers,” said Rea Alegre, AWU spokesperson.

AWU has been calling for a significant wage hike for private- and public-sector workers and employees and for agricultural workers. It has demanded the enactment of a National Minimum Wage of P750 daily for the private sector and P16,000 monthly for the public sector.

In their protest, AWU carried placards with photos of Pres. Noynoy Aquino on top and with the words “Itaas ang Sahod ng Obrero, Hindi ng Pulitiko (Increase the wages of workers, not of politicians)” written on them. It also carried streamers that read “APEC = lower wages, Junk APEC” and “Fight for Higher Wages, Fight for National Minimum Wage, P750 daily, P16,000 monthly!” 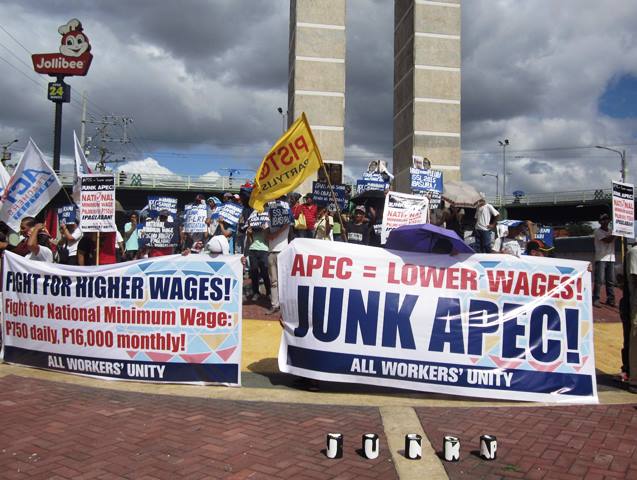 AWU is composed of groups from workers in the private sector, government employees, teachers, doctors and health workers. They vowed to join protests on the resumption of the House of Representatives this November 23.

They warned that the upcoming Asia-Pacific Economic Cooperation (APEC) Summit will only further impose a more inhumane policy on wages and salaries of workers, employees and even professionals in all sectors.

“We have no doubt that APEC Summit 2015 will uphold and expand the government’s unjust policy on wages and salaries. We’ve seen the effects of APEC 1996, and APEC’s current goals and agenda show it is getting worse,” said Alegre.