Lumád camp to be kicked out of Liwasang Bonifacio on Nov. 13

“We are being driven out of our ancestral lands, now, even here at Liwasang Bonifacio, we are also being evicted?”

MANILA – As the call of the Lumád to stop the killings and attacks on their schools gain popular support, they are to overcome yet another threat: the eviction of their Kampuhang Bayan (people’s camp) here at the Liwasang Bonifacio.

Manila city Mayor Joseph Estrada had earlier given permission for the Manilakbayan ng Mindanao camp to stay from Nov. 1 to 22, but he backtracked and shortened the permit only up to Nov. 12, reportedly upon pressure from Malacañang, with its overly-strict security preparations for Asia-Pacific Economic Cooperation (Apec) summit.

In a media briefing at the Kampuhan on Nov. 6, leaders of the #PHFightAPEC People’s Campaign against Apec and Imperialist Globalization condemned the “martial law-style” summit preparations. This include the memorandum issued by the Department of Interior and Local Government (DILG) which reportedly ordered the removal of “eyesores in Manila, including the Kampuhan.

Michelle Campos, daughter of slain Manobo leader Dionel Campos, said: “We are being driven out of our ancestral lands, now, even here at Liwasang Bonifacio, we are also being evicted?”

“This is an act of hypocrisy of the government, trying to hide the glaring reality of protests against imperialist globalization and plunder,” said the Manilakbayan statement. “We have legitimate demands against the encroachment in the ancestral domain and plunder of our resources by foreign companies and their local cohorts,” said the statement. 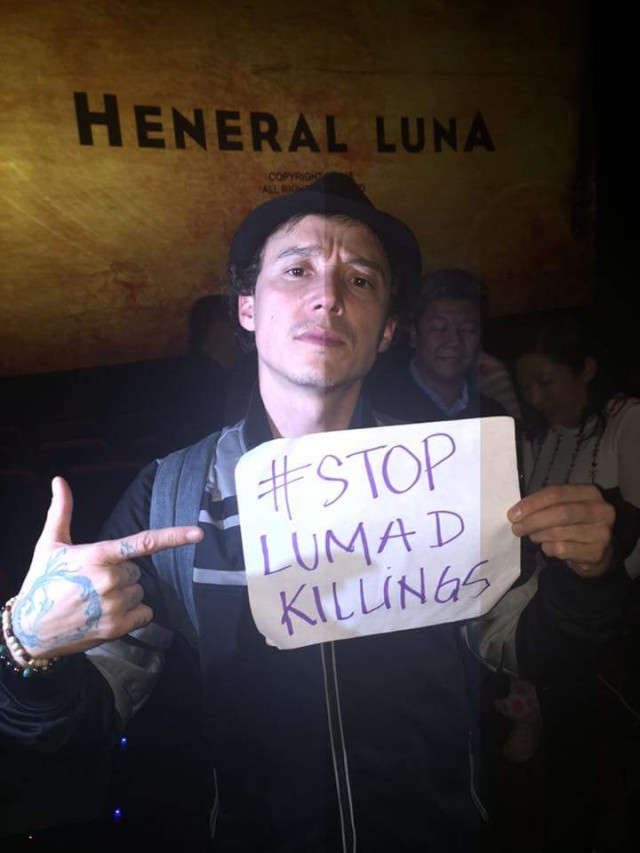 The Manilakbayan ng Mindanao — all 700 Lumád, Moro, peasant, workers and youth activists – transferred their camp at Liwasang Bonifacio on Nov. 2, after a week of stay in the University of the Philippines Diliman, in Quezon City. The protest caravan arrived in Manila on Oct. 26 after a week of journey from Mindanao, through Eastern Visayas and Southern Luzon.

At Liwasang Bonifacio, the Manilakbayan continues to get material, political and moral support from various groups, personalities and the general public who are gaining political awareness and making a stand on the situation of the Lumád, human rights and political issues.

Ironically, Estrada informed the Lumád leaders of their shortened permit-to-stay on Nov. 3, when the leaders paid him a visit, as the city council passed a resolution supporting the call to stop the killings and attacks on the Lumád.

Similar resolutions were passed by the city councils of Marikina and Caloocan.
Showbiz personalities also came out in social media, or to the Kampuhan, to give support to the Lumád cause.

Open to the public

The Kampuhan is open to the public, and serves as a hub for political and cultural exchanges, a venue to learn more about the Lumád culture and way of life, and the problems afflicting them.

Inside the Kampuhan is the Museo Lumád, where indigenous items from the Lumád tribes are displayed. There are also photo exhibits of victims of human rights violations from the different Mindanao regions. Various sectoral groups hold programs, educational discussion, and alternative classes.

Visitors can also ask permission to enter a tent and discuss with the lakbayanis, the Manilakbayan delegates, and hear first-hand accounts of their plight and struggle in their communities. And of course, one could just watch a demonstration of bead-weaving.

Lumád bead jewelry, tubao, and shawls made in Mindanao are also sold inside the Museo Lumád, as fund-raising for the Manilakbayan.

Renato Reyes Jr, secretary general of the Bagong Alyansang Makabayan (Bayan) called on the public to stop the Aquino administration from “sweeping under the rug” the Lumád and government critics to hide them from international media.

“Let us not let them be called ‘unsightly, unsanitary, and disruptive of the public safety and order, which is discriminative and insulting. We call on all to support the Lumád, to stop the impending eviction due to Apec preparations. Let us not let them be evicted from Liwasang Bonifacio,” Reyes said.