Why the Left is fighting alongside the Lumad 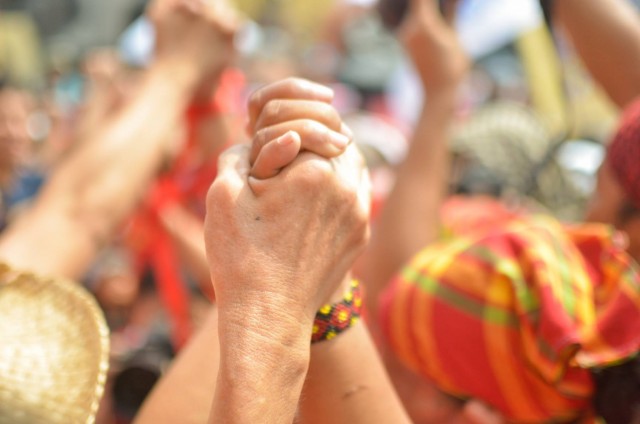 The accusation that the Left is exploiting the Lumad for political propaganda is easily refuted by the Lumad themselves through their compelling articulation of various abuses inflicted by state forces in their communities. The Lumad do not need the Left or activists to voice out their demands; they can speak for themselves.

With or without the Left, the Lumad have the right to assert the protection of their ancestral domains. They have the right to resist the entry of corporate interests in their lands and other forms of development aggression.

Solidarity is essential to effectively advance the cause of the Lumad and other marginalized communities. But expressing solidarity through advocacy is not necessarily a Leftist act. In fact, Malacanang NGOs are aggressively pursuing “peace activities” in Mindanao, even if the real intent is to broaden the constituency in favor of the Bangsamoro Law.

What is scandalous in the eyes of yellow apologists is not the idea of a marginalized community learning to defend its heritage, but the active presence of the Left among these ethnic tribes. They cannot accept that the Left is wielding influence in the grassroots.

What they refuse to recognize is that it is mainly the Left which has chosen to embrace the struggle of the Lumad compared to other political forces which sided with foreign capital and big business in the exploitation of our precious resources.

Hence, the malicious and desperate tirade against the Left, in order to tarnish the credibility of the local resistance movement.

But perhaps the red baiting tactic is intended to achieve more. Aside from muddling the issue and diverting the attention of the public, the other motive could be to render the Left ineffective in pursuing similar campaigns in the future.

Ridicule the Left, demonize its image, and spread nasty lies about its political record. As the Lumad continue to gain broader public support, government apologists responded by hyping the so-called Left menace. Pathetic and unprincipled, but this propaganda operation works all the time. Ask Duterte who recently accused the administration party of engaging in black propaganda.

Consider these examples: The Lumad held a caravan from Mindanao to Manila, but they were mocked as mere hakot (paid crowd) of the Left. They have reasonable political demands, but reactionary pundits quickly dismissed them as part of a Leftist “agit-prop.” It is disappointing to encounter echoes of these anti-Left and anti-Lumad rantings on mainstream and social media.

If the Left joins the Lumad in calling for land, justice, and human rights in Mindanao, does it invalidate the message? If some of the Lumad become activists, does it mean the Left is committing political opportunism?

It is not unlawful and unethical if the Left pursues a stronger political bond with the Lumad. But for the anti-Left and many liberals, the link between the two is repulsive. The anti-Left have their own misguided reasons for reacting this way, but how do we explain the sentiment of many middle-class liberals?

Perhaps they have been frustrated already by the behavior of traditional politicians which led them to misperceive the militant pro-Lumad campaign of the Left as another insincere publicity stunt. They fail to appreciate that the Left is doing something concrete on the ground precisely because politicians, as always, didn’t deliver on their promise to make things better for everybody.

For many who have been victimized by the doctrine of political-correctness, they probably misinterpreted the unity between the Left and the Lumad as a violation of privacy and autonomy of the latter. For them, political advocacy is carried out with minimal interaction with the grassroots. Solidarity is practiced through volunteerism, and the victims are empowered through charity. Applied to the Lumad situation, they probably couldn’t understand why activists are espousing ‘hard’ political demands, instead of working with the government to address the basic needs of the Lumad communities.

A brief integration, or even discussion with the Lumad would have sufficed to provide context to the situation. How can the Lumad welcome state-sponsored reforms when state-sponsored activities (agribusiness, logging, mining, militarization) displaced them from their communities? But alas, many are probably comfortable already in echoing the opinion of Manila-based commentators that the Lumad are stubborn as they continue to protest against the government.


The stereotype of the ideal victim is shattered by the fighting Lumad who are now encamped in Metro Manila through the Manilakbayan campaign. Many expected the Lumad to be helpless, meek, and exotic but the Lumad who arrived with the Left are assertive, combative, and political. Some are probably asking: Did the Left corrupt the Lumad?

This thinking is reflected in a government report which rebukes both the military and the NPA for recruiting the Lumad. What exactly is the government expecting? That the Lumad will continue with their weaving and dancing, even if mining operations are already destroying their homes? That the Lumad will sing praises to the government, even if soldiers are attacking their schools and communities? That Lumad warriors will quietly ignore the desecration of their culture?

Then there are those who question the appropriateness of adopting the Leftist agenda to address the Lumad issue. Spare the Lumad from Marxist slogans, they insist. Perhaps some of these scholars are thinking that the Left is hijacking the Lumad cause.

But if the Leftist agenda is the most comprehensive in achieving social transformation, then the Lumad will also benefit in the broader national political struggle. To be fair to my fellow activists, no Marxist technical terms are mechanically imposed in the Lumad campaign. The slogans, demands, and action programs of the campaign reflect popular themes. No communist utopia is required to realize the wishes of the Lumad. End military abuse, stop destructive mining, respect ancestral domain, land reform, human rights – these are not just Leftist assertions; these are democratic programs guaranteed by the laws of the republic!

Finally, the Left’s active participation in the Lumad campaign is another reminder of how the Philippine Left has managed to survive and thrive despite the non-stop attacks of its ideological enemies. It has organic ties with the grassroots, it mobilizes the marginalized, and it links and unites various sectors to establish a strong and dynamic people’s mass movement from the rural to the urban. Compare the Left to bourgeois parties which are scandalously corrupt, inept, and insensitive to the plight of the poor.

Despite the repression it continues to endure, the Left remains immersed in the everyday struggle of the masa. And this is clearly demonstrated in the Left’s resolute commitment to fight alongside the Lumad in defending our land from plunderers, oppressors, and modern day fascists.

Mong Palatino is a Filipino activist and former legislator. He is the chairman of Bagong Alyansang Makabayan Metro Manila. Email: mongpalatino@gmail.com