#Manilakbayan2015 | They come from different tribes, places but unite in one struggle

A line of Manobo, Matigsalug and Mandaya peoples, in their traditional attire, march playing the buntong and kudlong.

MANILA – Living upland until recently, they use to till food crops like corn, bananas, cassava, sweet potato, and rice. Some also grew abaca. They said they have learned to practice better agricultural methods which are sustainable instead of slash-and-burn, even tending to their own livestock. Most of it their communities itself consumed.

Because they have long demanded from the government schools for their children, and training and aid in farming suited to their needs, they banded together and worked to source and provide it themselves. From their accounts, they took and made the most of what the Church people and various organizations such as the International Committee of the Red Cross (ICRC) had offered them for help.

For the last seven to eight years at least, they have been building and running their schools, as well as embracing and developing sustainable farming methods all the while fiercely defending their lands from encroaching giant mining and logging companies, energy projects and plantations.

They are the indigenous tribes of Mindanao. They have been looking forward to build on their initial successes, but the country’s armed forces claim their projects and schools are projects and schools of the New Peoples’ Army (NPA), and the indigenous peoples groups themselves are supposedly fronts or members of the NPA. It didn’t help that large investors from mining companies, plantations and energy companies, which are supported by the government, wanted the IP lands.

Many of these tribespeople accused by the military as NPAs were forcibly driven to evacuate in fear for their lives. Left behind in their communities were the livelihood projects, crops and animals, and the schools they had worked hard for.


This October 26, members of these indigenous tribes from Mindanao arrived in Manila to bring the stories of their struggle, their demands for justice and change, and their hopes to gain the solidarity of fellow Filipinos who may not hear of their plight and aspirations.

Eufemia Cullamat, 55, from Caraga, told Bulatlat.com that they have gone through a long trek under the sun and rain, long journeys as a caravan of protest and hope. Sometimes, they ate only twice a day during the long trip to Manila.

Sometimes they encountered ranks of policemen trying to prevent their progress. There had been spikes thrown on the road to burst their tires.

“We have prepared for all these,” Cullamat said, adding that when they arrived in Manila, and they were welcomed and greeted by supporters, they felt their strengths were bolstered.

She said their efforts and campaigns to save their communities, their way of life and the forest, are not just for their own benefit.

Researches indeed bolster the need to protect and even expand the remaining forests. It will redound as well to the people living lowland in terms of water and soil retention (flood prevention, guards against erosion and flashflood), watershed support, and aid in countering destructive effects of climate change.

With Cullamat are close to 800 indigenous peoples from Mindanao who arrived in Manila this Monday, October 26, to protest the militarization of their communities, and its resulting human rights violations against their members.

Most participants of Manilakbayan happen to be internal refugees, having come from evacuation centers in Tandag, Surigao del Sur and Haran Compound in Davao.

They comprise 18 tribes. When they reached Southern Tagalog on Sunday, October 25, they were joined by the Mangyan tribes from Mindoro.

In Manila, members of various progressive organizations welcomed them at the Bonifacio Shrine. By then, they have been on protest caravan for six days.

After joining forces, they marched to Mendiola Bridge (Chino Roces) near Malacañang, and there held a program till late afternoon.

Although some interviewed by Bulatlat.com admitted that they were tired out, they said they draw strength and renewal in seeing the support and welcome of various sectors. During the march, they brought their exuberant birdlike hoots. Asked what those shouts and hoots were about, they said it’s just to bring cheer and wakefulness to each other. 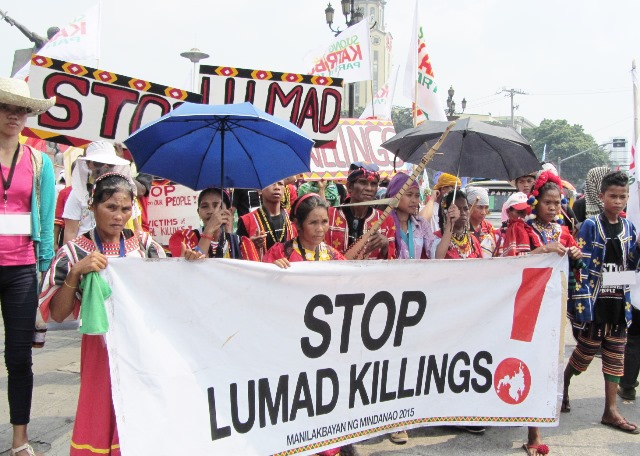 They brought a live rooster which they sacrificed during the program at Mendiola Bridge, for the unity ritual where each participant dips his or her finger on the animal’s collected blood and dab their face with it to signify his or her alliance with the group’s purpose.

A line of Manobo, Matigsalug and Mandaya peoples, in their traditional attire, marched playing the buntong and kudlong. The first is a mobile drum made from bamboo, the latter is like a guitar, but nearly as long as a cello and as narrow as a violin. The kudlong player who wore a profusion of beads and feathers for head gear opted to play the buntong instead while marching.

They were playing a tune, they said, just to help the participants combat the blues and feel more upbeat.

In Mendiola, the “lakbayanis” (traveling heroes) listened and cheered at the mostly angry speeches of their leaders and supporters. With more than 58 IPs killed under the Aquino government alone, hundreds of families forced to leave their treasured farms and schools to become internal refugees, or evacuees (bakwit), they cited many reasons for the anger and demands for justice.

“It’s so painful to think our crops just wilted and died, and many of what we’ve built have been destroyed or gone,” Jong Monzon, 23, secretary general of Pasaka, the regional alliance of indigenous people in Southern Mindanao, told Bulatlat.com during the march to Mendiola.

A son of a Manobo father and a Mandaya mother, Monzon was playing his buntong with some Blaan and Mandaya while Manilakbayan marched to Mendiola.

“Although we come from different tribes, we are united,” he said.

The ‘lakbayanis’ want the Aquino government to pull out the military from their communities, to put an end “to their camping out in our schools,” to let the IPs be in their farms, and save their schools.

Children of killed indigenous peoples seem also to have taken up the causes of their parents, as Michelle Campos, daughter of murdered IP Dionel Campos, took to the stage and rallied the Lakbayanis to their demands.

Monzon himself is the second eldest son of Ludiño Monzon, who was gunned down allegedly by soldiers from the 67th Infantry Battalion in 2009. The elder Monzon was then opposing the entry into their community of large-scale foreign gold miners.

In Mendiola, indigenous children performers wowed the crowd with cultural numbers. They were students in the IP schools forcibly closed by the military. Barely teenaged boys recited their balagtasan-like sharing of their experiences. One recounted the position of the government/military/paramilitary, another the position of the organized indigenous peoples and the other the role of moderator.

In flawless, poetic Filipino, they excoriated the government-sanctioned division of their tribes between those welcoming foreign companies and those defending the ancestral domain. They were heartily applauded.

Jomorito Guaynon, the Higaonon chairperson of the Kalumbay Northern Mindanao Regional Lumad Organization, said the Lakbayanis will seek dialogue with government agencies such as the Department of Justice, the Commission on Human Rights, the Department of Education, the National Commission on Indigenous Peoples. He said they will also bring their protests at the doorstep of mining companies such as Glencore-Xstrata.