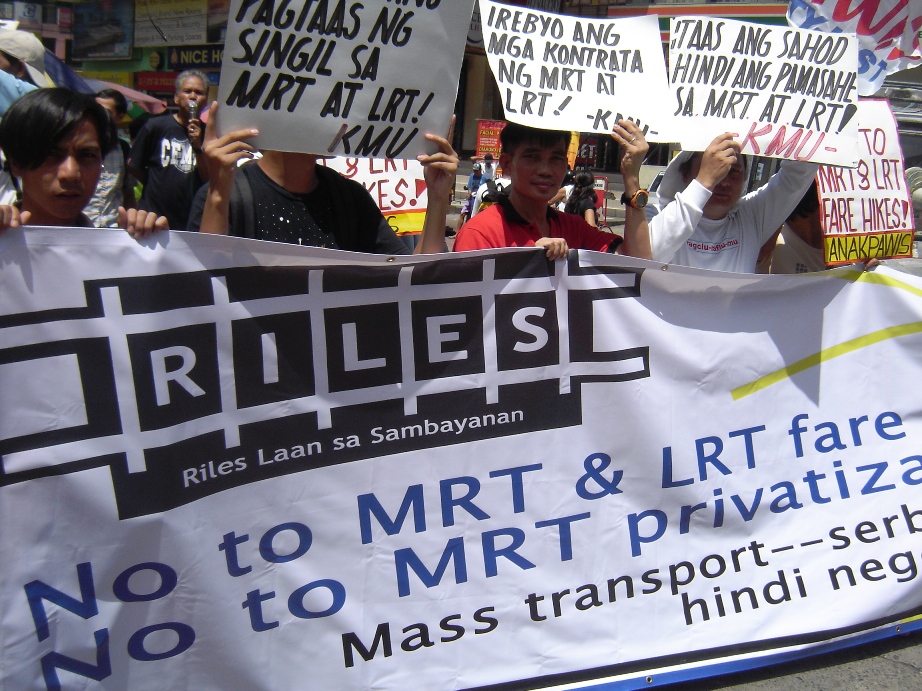 “The MRT-LRT should be a public service. It should be for the people and not be used by big business to impose unjustified fees.”

MANILA – After commuters launched this week what they dubbed as “People’s Campaign for Government Takeover of the MRT-LRT,” they are now holding meetings with various groups to reach their goal in time for the 2016 national elections: a signed petition by millions of people for government takeover of the country’s railways.

Sammy Malunes, spokesperson of RILES Network, told Bulatlat.com that the public’s call for “rational handling” of railways and public transport, in general, should also be a staple issue in any presidentiable’s platform. He said that by now, there are already ample proofs showing the irrationality of privatizing the railways. Irrational, that is, from the commuters’ and public’s point of view.

No thanks to various public-private partnership (PPP) setups in the country’s railways, the public is being bled dry, increasingly forced to pay more for less, court risk and inconveniences riding the trains, while, on the other hand, a few business groups cornering fat government contracts reap guaranteed profits. This, in summary, is the conclusion of commuters’ groups protesting in LRT, MRT and PNR this week.

The PNR is still at the privatization auction block, with its workers’ union opposing it. The MRT and LRT are both at the hands of private concessionaires.

In the MRT and LRT, the protesters are railing over the exorbitant fare hike, and the continuing lousy, even risky service as more passengers now vie for reduced operating trains.

In a protest last Monday October 5, in one of the MRT stations, RILES Network reiterated its opposition to the nine-month old “oppressive fare hike” which, the group warned, is only the beginning.

In LRT 1, meanwhile, when it increases its fare again in 2016, a round-trip from and to the Roosevelt and Buendia stations will amount to P65 or 14 percent of the daily minimum wage. An Ibon Foundation survey revealed that 68 percent of MRT and LRT passengers are in fact low-income earners, i.e., earning less than P10,000 per month.

Despite regular fare hike schedules, Malunes said, the concessionaires still cut corners on rail system maintenance to save money and increase profits. In doing so, they put commuters at risk, Malunes said.

He cited in particular the MRT concessionaires’ refusal to replace its frequently malfunctioning signaling system. This monitors train movements to prevent collisions, among others.

Malunes said MRT concessionaires benefited from the P32.5 billion ($712 million) equity rental payments by the government from 2000 to 2013, yet, during the same period, they made no significant improvements on the rail system. This is chiefly to blame for the long snaking lines and jampacked MRT rides.

As for the LRT 1, Malunes also pointed out the irrationality of privatizing the system, saying it had been economically self-sufficient before it was privatized last year. It operated in 2013 with an average farebox ratio of 1.29 (a ratio of 1 indicates 100 percent recovery of management and operations costs). Its revenue exceeded its expenses without yet accounting for non-rail income such as advertising, leases, among others.

“The concession agreements for the MRT and LRT already guarantee regular fare hikes high enough to be considered oppressive. And yet, private concessionaires are still trying to find ways to charge commuters more,” Malunes or RILES Network said in another statement.

This is concerning the beep cards which Anakpawis Partylist Rep. Fernando Hicap also slammed for giving commuters a headache and not relief.

“The problem remains, train commuters continue to suffer from the MRT’s rotten train service. Worst they are duped to pay P20 ($0.44) issuance fee for the new ticketing system. This on the top of the 10-month old MRT/LRT fare hike but the train service continues to have a lackluster operation” said Anakpawis Rep. Hicap.

Hicap decried the new ticketing system as just another money-making scheme of AF Payments Inc., the operator of the beep cards, which, in turn, is led by Metro Pacific Investments Corp and Ayala Corp consortium. The government awarded the automated ticketing system to the Pangilinan-Ayala led group to the tune of P1.72 billion ($37.7 million) for MRT 3, LRT1 and 2 train systems. These are the same business groups that bagged the privatization deal of LRT 1 and 2.

The beep cards problem, said Malunes, is another reason why the government must take over the MRT-LRT, and to safeguard public interest, he added, there should be increased transparency regarding the use of public funds for maintenance and improvement of the system.

“The MRT-LRT should be a public service. It should be for the people and not be used by big business to impose unjustified fees,” Malunes said.