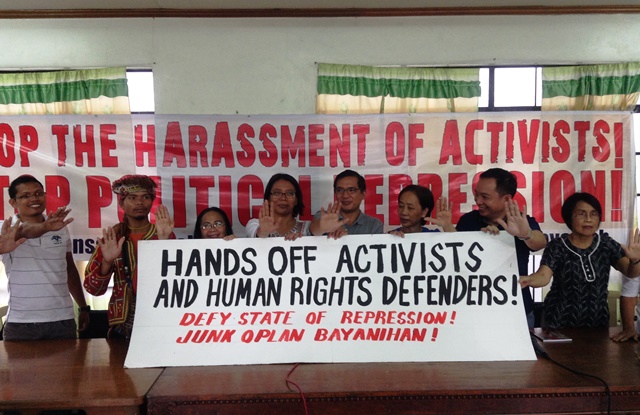 “Such documents could only have been obtained by deliberate and systematized acts of surveillance and data-gathering on the part of respondents.”

MANILA – “If ever I will see those behind the cases against my late husband, I will not utter a single word. I will just slap them.”

This was the stern warning of 76-year-old Rosario Beltran, popularly known as “Ka Osang,” widow of the late Anakpawis Rep. Crispin “Ka Bel” Beltran, who was implicated in a criminal complaint filed against progressive leaders in Davao city.

Ka Bel, an icon in the country’s labor movement, passed away in 2008. Ka Osang told Bulatlat.com the people behind the case have no respect for her late husband.

On Sept. 18, the Beltran family and other human rights activists and church leaders filed a petition for the writs of amparo and habeas data before the Supreme Court against President Aquino and ranking military officials.

Ka Bel and 69 other activists were in a list attached to a complaint of kidnapping, serious illegal detention and trafficking against 15 leaders and members of progressive organizations who visited the sanctuary of some 700 Lumads at the United Church of Christ in the Philippines (UCCP) in Davao city.

The 70 progressives implicated, were purportedly identified by the complainants from police “rogue gallery.”

The case stemmed from the militarization of communities in Talaingod, where residents forcibly evacuated from their homes early this year. Some of the residents who returned to their homes were reportedly brought by the military to the Criminal Investigation and Detection Group (CIDG) to file a criminal case against progressive leaders, whom they were asked to identify from a “rogue gallery.”

The petitioners – who are mostly based in Manila — found it “highly suspicious” that their pictures were produced on the same day and only a few minutes after the alleged complainants were brought to the local office of CIDG. They alleged that CIDG “was provided with dossiers about them and the other individuals included in the lists.” It also meant that they have been subjected to surveillance.

In their prefatory statement, petitioners said the government counterinsurgency program continues to blur the line between armed revolutionaries and unarmed progressives. As a result, they “suffered from surveillance, red-tagging and various forms of harassment through the years and are now being implicated in trumped-up charges.”

The petitioners cited how they have had their own share of harassment.

Rep. Zarate was included in the so-called Order of Battle, a military hit list. Two complainants who claimed to be evacuees at the Haran Center of United Church of Christ in the Philippines have so far surfaced to file serious illegal detention and violations of the anti-child abuse law against the lawmaker.

In 2006, then partylist representatives Mariano and Casiño were charged with rebellion along with four more progressive lawmakers. The cases, which were filed by the now defunct Inter-agency Legal Action Group (IALAG), were eventually dismissed.

The CIDG had also implicated both Mariano and Casiño in a kidnapping with murder case in Nueva Ecija. The petitioners said the victim died of a road accident.

Church leader Balaba was hounded by at least three men, believed to be state security forces, who came asking for her in four different occasions in August.

Schools being run by Sr. Añover, who is also the national coordinator of the Rural Missionaries of the Philippines, were tagged as “communist schools” by the military. These schools are actually learning centers for Lumads.

Palabay and her group Karapatan have long been targets of vilification and red-baiting. Her fellow rights activists fell victim to extrajudical killings, with 38 killed from 2001 to August 2015.

“The existence of the lists and ‘rogues gallery’, the attempts to incriminate petitioners in the fabricated criminal charges and insinuate their links with the NPA, and other acts of harassment narrated above all constitute threats to petitioners’ lives, liberty and security, for which the petitioners, with the exception of the heirs of Crispin Beltran, are seeking the protection of the Writ of Amparo,” the petition read.

Petitioners believe that the government has no basis to present them in the “rogue galleries” as alleged by complainants. They added that including Ka Bel’s photo is a “continuing effort long after he passed away.”

They asked the Supreme Court to direct the respondents to provide them a copy of all information gathered about them and destroy such.

“To reiterate, such documents could only have been obtained by deliberate and systematized acts of surveillance and data-gathering on the part of respondents,” the petition read.