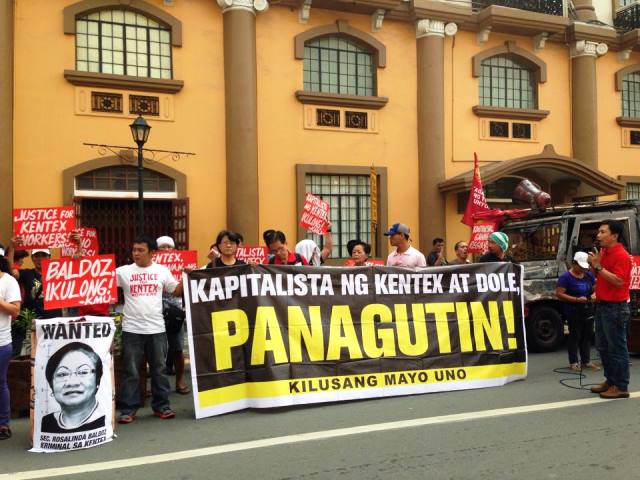 MANILA – Three months after the biggest factory fire casualty happened in Valenzuela City, the survivors and relatives of Kentex fire victims trooped again to the national headquarters of the Labor Department to demand its accountability to the said workplace tragedy.

“Labor Secretary Rosalinda Baldoz should have resigned by now; she should have been answering to her crimes by now,” Ammied Rada, Justice for Kentex Workers Alliance coordinator, said during their picket at the Labor Department.

The fire victims’ alliance reiterated its calls for the Office of the Ombudsman to speed up responding to the cases they have filed against some high ranking officials of the Department of Labor and Employment and Bureau of Fire Protection. 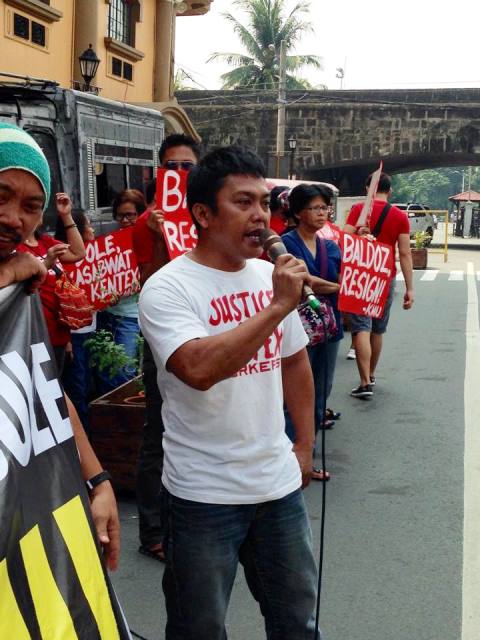 When they say justice has yet to happen in their case, Rada explained they are mostly referring to the stubborn refusal of the Aquino government to charge its high ranking officials in the Labor Department and Fire Protection. He said anybody can see that the Labor Department had allowed Kentex Manufacturing Corp. to operate, that it even issued the factory a Certificate of Compliance at ensuring health and safety of the workers on September 2014. Also, he added, it is very clear that the BFP had not issued the factory owners a Fire Safety Inspection Certificate, but, it also had not ordered its closure as it should have done. 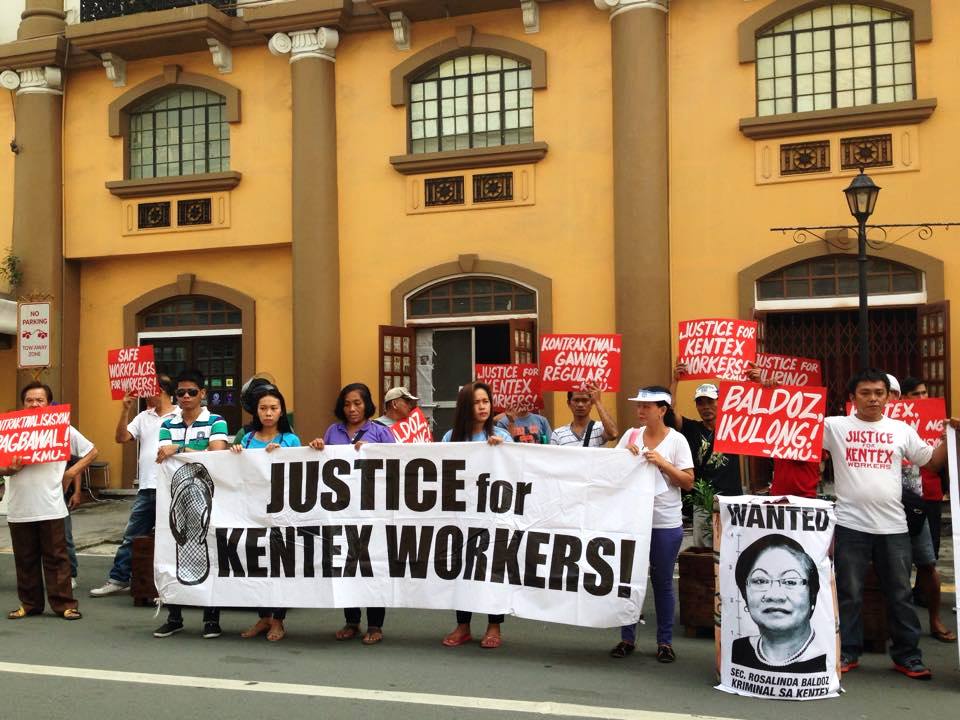 Joselito Ustarez, national vice-president of Kilusang Mayo Uno, cited some likely reasons why Pres. Aquino refuses to recognize the Labor Department’s accountability for the death of many workers. “The Aquino government does not want to change its pro-capitalist policies on workplace safety. It does not want to hold Baldoz, a close ally of the president, responsible. These are there reasons why,” said Ustarez.

In picketing once again before the Labor Department, Rada said they also want to send the message across that their struggle for justice and accountability has not yet ended, as he said the Kentex capitalists would like the people to believe. He appealed for public support to the Kentex fire survivors’ quest for justice.

Supporting the Kentex fire survivors, the KMU reiterated its calls for the scrapping of DOLE Order No. 131-13 or the “Rules on Labor Laws Compliance System” which it says masks the government’s collusion with capitalists through a so-called “tripartite” mechanism of workplace safety inspection.

In Congress, a substitute bill was approved by the House of Representatives Committee on Labor and Employment last August 5. It seeks to legislate mandatory inspection of all businesses in the country and heavy penalties for capitalists who violate workplace safety standards.