“Due to prevalent joblessness, contractualization, low salaries and for opening our economy to foreign plunder, we present this award to Aquino: ‘Pinakapahirap Award.’” – GWP Rep. Emmi de Jesus

Maria has been a beneficiary of the Conditional Cash Transfer (CCT) program since the administration of President Gloria Macapagal Arroyo. She requested anonymity, fearing she might lose her dole-out because of this interview.
She receives from P1,300 ($28) to P1,600 ($35) every two months from the government’s dole-out program. Though she only has one son to feed and send to school, the help from the government is still not enough for them to live decently.

“We cannot even eat three times a day. The money is not enough, not even for my son’s needs in school, because there is always a project to spend for,” Maria told Bulatlat.com in an interview.

The progressive women’s alliance, Gabriela, said worsening poverty has been the state of women under the Aquino administration. In a press conference on Friday, July 24 at the Chino Roces bridge (former Mendiola bridge), the group named Aquino as “the worst President.” They gave five “kalabasas” (squash) to Aquino, which they said represents five years of suffering that Filipinos endured under his “incompetent and corrupt administration.”

”Kalabasa” or squash is being used colloquially as a symbol of flunking in school.

She scored the massive poverty incidence afflicting 25.8 million Filipinos despite the almost P70 billion pesos ($1.54 billion) allotted by the national budget for the dole-out program.

At the press conference, Joms Salvador, Gabriela secretary general pointed out at least three crimes of violence against women. “Beaten up with dole-outs, raped in the ‘dark path’ and pimped to foreigners,” said Salvador.

“The women and their poor families are beaten up with dole-out programs but they remain poor. Even with the exponential increase in budget for Aquino’s poverty reduction program, government’s own data will show that poverty incidence is still increasing,” Salvador said in the conference. 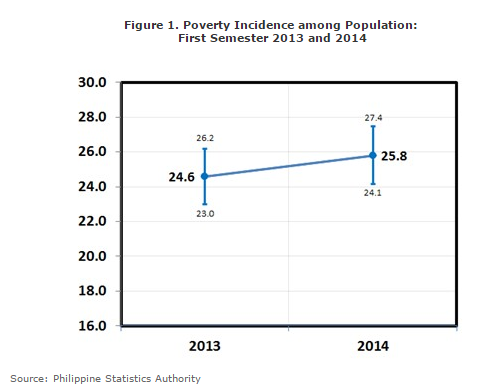 What is more insulting, said Salvador, is that the Pantawid Pamilyang Pilipino Program (4Ps) has become a steady source of corruption, benefiting politicians and government officials involved in the program. “Meanwhile, intended beneficiaries are deprived of the supposed cash assistance and generations of Filipino people will shoulder the burden of paying the debt-driven 4Ps,” Salvador added.

For Maria, there had been no improvement in their lives even if she has been a member of 4Ps since Arroyo’s administration. “There is no change,” she said, adding that they now live an even more difficult life as prices of basic commodities have never been affordable to them. She said what they need is work with regular income.

Violence against women and children

The group also noted a significant increase in cases of violence against women under Aquino. Incidents of rape increased, from 1,329 cases in 2010 to 2,681 in 2014.

From 2010 to June 2014, the Gabriela Services Committee has recorded 77 cases of abuse of women committed by persons in authority. The most number of cases reported are committed by men in uniform. 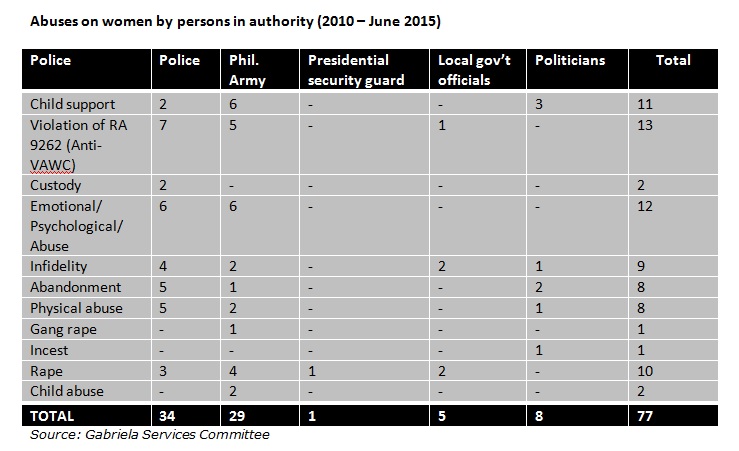 “The ‘matuwid na daan’ (righteous path) has become a ‘madilim na daan’ (dark path) for women where they get raped, abducted and even killed. Worse, persons in authority, particularly the police and the military, have been consistent perpetrators of violence against women, thereby perpetuating impunity,” Salvador said.

For the last five years, Aquino served as “a pimp,” as he “sold off” the national patrimony and sovereignty to foreign powers, said GWP Rep. Emmi De Jesus.

De Jesus slammed the Enhanced Defense Cooperation Agreement (Edca) which she said is lopsided in favour of the United States.

Salvador said the increasing presence of US troops, and recently of Japanese troops, for joint military exercises will give rise to prostitution of women and other crimes in areas accessed by those troops.

“Aquino has practically signed off the whole Philippines as a foreign military base through more vigorous military exercises, the Edca, and now the presence of Japanese military—who are historically accountable for the ‘comfort women’ system. Aquino has practically raped our national sovereignty and pimped our women and children,” Salvador said.