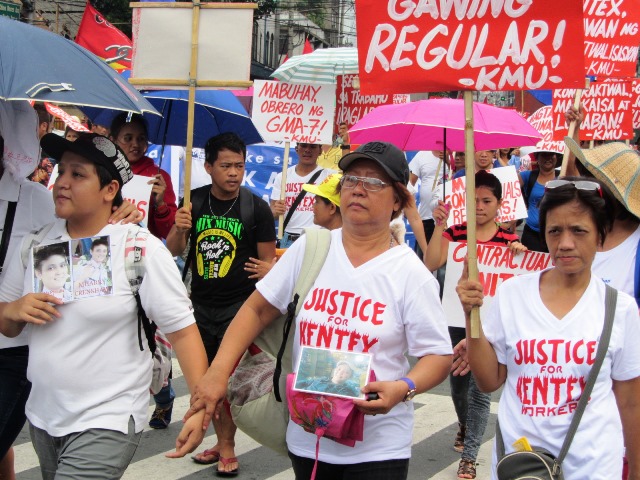 “Justice is what we want.”

MANILA – Two months after the Kentex factory fire in Valenzuela, survivors and relatives of those who perished have been joining protest actions of various workers groups, still demanding justice.

Making an appeal to the public, Michael Lazarte, coordinator of Justice for Kentex Workers Alliance, said, “Don’t be taken in by the deception of Kentex management. Don’t let them trample all over us yet again.”

“Contrary to what the Kentex management wanted to appear, we are bent on demanding justice,” Lazarte emphasized.

But Kentex’s legal counsel has previously made much of the news that some of the survivors had accepted their P151,000 ($3,343) offer of compensation. In exchange, the survivors have supposedly agreed not to pursue the cases against Kentex Manufacturing Corp.

Lawyer Remigio Saladero, legal counsel of Kentex survivors and families, said earlier that even if some of the families of the victims have been forced to accept the offered money – “they have lost breadwinners and many are in dire straits” – the victims cannot legally exculpate or waive the accountability of those responsible.

At the protest-march to Mendiola of various workers’ groups on Monday morning, July 13, timed to coincide with the second month of Kentex factory fire, the families and survivors gathered hoping to counter the “deception” of Kentex management.

“They had turned the slippers factory into our prison with the result that many died in the fire; they exploited us heavily for their profits; there were no labor standards and they are still denying all these,” said Jobert Carillo, 21, spokesperson of Justice for Kentex Workers Alliance.

He added that they are sure more than 73 workers died in the fire. There had been many more workers at the time, and majority of them were in different employment modes as low-paid non-regular workers.

In fact, based on a hearing of the Committee on Labor and Employment in Congress last May, a couple of weeks after the Kentex fire, a labor laws compliance officer (LLCO) testified that as of 2014, Kentex Manufacturing only had 31 regular and 15 casual workers, or 46 in total. Meanwhile, the CGC agency had deployed 99 workers in Kentex. Anakpawis Rep. Fernando Hicap said the agency is not even a registered sub-contractor. He said Kentex factory had 145 workers, but on the day the fire broke out, the total number of workers is yet undetermined.

This CJC Manpower Services, the service agency which was hired by slippers maker Kentex Manufacturing Inc., is now nowhere to be found.

“The service agency’s disappearance does not augur well for efforts by the victims’ families and the survivors to hold it accountable for grave violations of safety and general labor standards,” Rogelio Soluta, KMU secretary-general, said in a statement last Tuesday (July 14).

Still smarting from the loss of loved ones

Rosemarie Magracia, 53, carried at the Mendiola protest two laminated pictures of her daughter, Ma. Precilla M. Crenshaw, one of the Kentex fire victims. A “reviser” or someone who paired left slippers to right slippers of the same size, Crenshaw used to live in her mother’s family home in Malabon.

Magracia said since her daughter began working at Kentex about two years ago, Crenshaw entrusted her 12-year old daughter in her care and opted to rent a room in Valenzuela to be near the factory.

“It hurts to talk about it,” Magracia told Bulatlat.com, referring to that fateful day two months ago and the twists and turns in the family’s search for justice.

She shared that her granddaughter also feels sad every time the kid remembers her mother, like when she hears some songs that used to have meaning to the mother and daughter.
Crenshaw’s family declined the Kentex management offer of P136,000 plus P15,00 ($3,343 in total).

Magracia quoted her eldest, who also wants the whole family to continue pursuing justice for Crenshaw: “Suppose they (Kentex owners and lawyers) have their families die in the fire, would they agree to equate their losses to just that amount of money?”

Also at the Monday protest against President Aquino’s policies on labor were the wife and sister of Kentex victim Suprimo Lugana. They, too, refused to accept the Kentex-offered settlement of a total of P151,000.

“Justice is what we want,” Suprimo’s family reiterated.

“What happened at Kentex shows us that contractualization kills, either slowly or immediately,” Rea Alegre, spokesperson of All Workers’ Unity, said during the protest at Mendiola on the second month of Kentex fire. 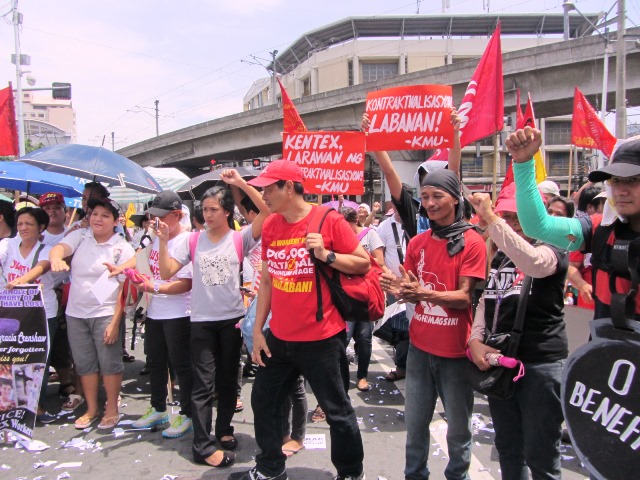 Workers’ groups like All Workers’ Unity have blasted not just the lack of health and safety protocols. They also blame the Aquino government’s implementation of policies toward contractualizing labor, as one of the causes of workers’ poverty and debilitating accidents at the workplace.

Lazarte of Justice for Kentex Workers’ Alliance pointed to the poverty and oppression of Kentex workers as proof and confirmation of the dire impact of contractualization, and how it paves the way to wholesale violation of workers’ rights.

Following the seven-hour fire in Kentex two months ago, various labor inspections and fact-finding mission unearthed not just bodies of 73 victims, but horrendous tales also of violations of labor standards.

“Most of Kentex workers were contractuals who were given wages below the legally-mandated minimum, were denied their benefits, and were subjected to dangerous working conditions,” Labog summarized.

Fact-finding missions held by KMU among Kentex survivors revealed that workers earned only P187 to 220 ($4.14 to $4.87) per day, the CGC agency workers received only P202 ($4.47) per day, all of which are below the mandated minimum wage.

Anakpawis said contractualization have been an instrument of capitalists to mercilessly depress wages for huge profits. According to the Kilusang Mayo Uno, this is happening in establishments not just because the owners of Kentex and the CJC agency have been doing it, but because the government is “in cahoots” with employers like them.

In surprise onsite joint inspections which the labor department had been compelled to do given the outcry over Kentex fire, they found out also that almost all of the 42 establishments around the Kentex factory in Barangay Ugong and in factories in other barangays in Valenzuela City were systematically violating general labor and basic occupational health and safety standards. They used as guide the Labor Laws Compliance Assessment Checklist on the compliance to the General Labor Standards (GLS) and on the Occupational Safety and Health Standards (OSHS).

Majority of those inspected establishments showed employers do not comply with the current mandated daily minimum wage of P481 ($11) and do not remit their employees’ Social Security System, PhilHealth and Pag-Ibig premiums.

Majority of workers interviewed were deemed susceptible to underpayment of wages and benefits because they do not know how to compute their overtime pay, night shift differentials, regular holiday pay premium pay special holidays, COLA, piece rate (pakyawan) arrangement, and premium pay for rest day.

The labor inspections’ report on Valenzuela factories also confirmed how widespread contractualization of labor has become in the area.

In a company manufacturing plastic products, something which Valenzuela City is known for, the inspectors reported that it “almost exclusively uses labor-only contracting,” which is supposed to be illegal. Less than 30 rank and file employees are regular, the rest of the more than 300 employees are manpower agency workers working in the same company premises using machines owned and maintained by the company.

KMU and AWU, healthworkers groups from the Alliance of Health Workers, joined by the public sector employees from Courage, and teachers belonging to the Alliance of Concerned Teachers (ACT), demanded the scrapping of Aquino government’s policies on contractualization. 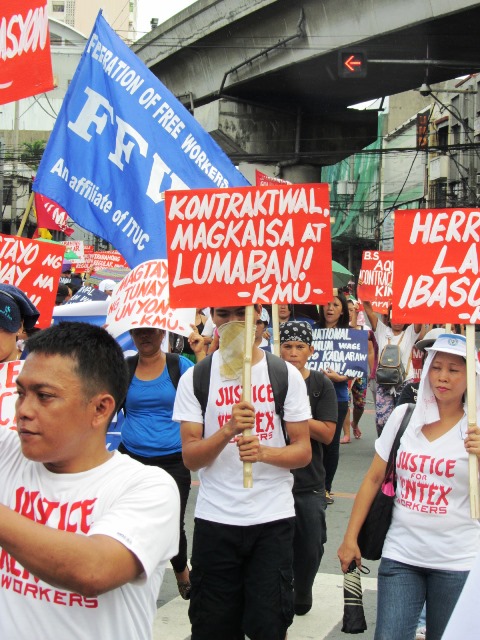 In the private sector, the guidelines on contractual employment are said to be in the Department of Labor and Employment Order No. 18-A Series of 2011, which, KMU and AWU say, has brought about further contractualization of work forces, “contrary to the agency’s hype when the guidelines were approved in November 2011.”

The labor center has also previously criticized efforts in Congress to pass another similar version of the said department order. Instead, they are demanding the enactment of the proposals of progressive partylists for Regular Employment Bill and SHIELD (Safety and Health Inspection and Employers’ Liability Decree) which were filed by Reps. Emmi De Jesus and Rep Luzviminda Ilagan of Gabriela Women’s Party in June 2014.

Without change in policies and with the national government continuing to pass to others the responsibility for upholding workplace safety, barely holding a mandatory inspection of businesses, and imposing meager penalties for employers who violate safety standards, the Kilusang Mayo Uno warned that factory fires killing workers will likely happen again.