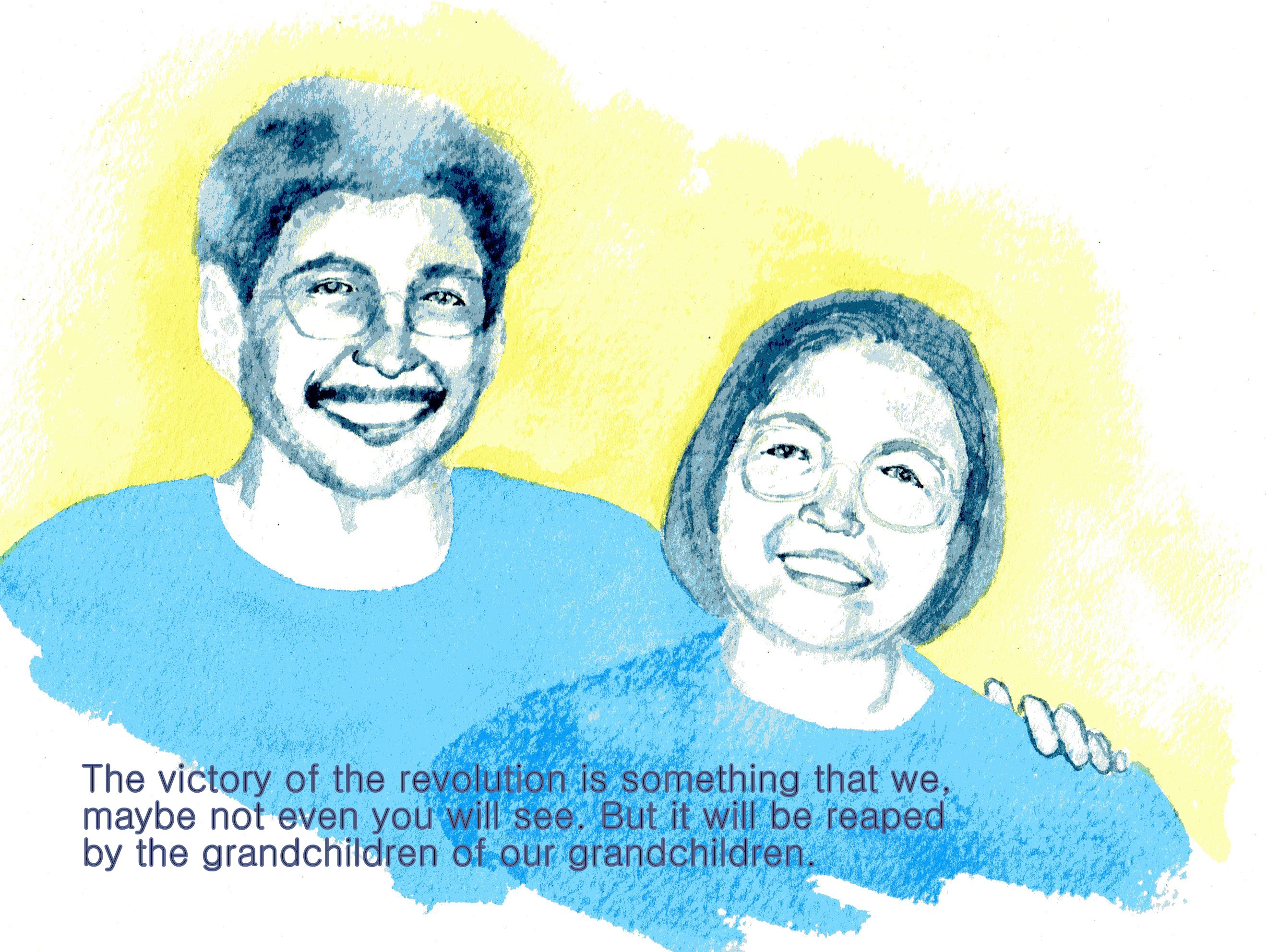 On June 26, 2006, at 8 p.m., Prudencio Calubid, 63, peace consultant of the National Democratic Front of the Philippines (NDFP), and his wife Celina Palma, 46, were disappeared by suspected state forces.

Suspected military agents tailed Calubid and his group from Manila, and eventually blocked them on a desolate road in Sipocot, Camarines Sur. All five members of the group — NDFP staff Ariel Beloy and Antonio Lacno, and Calubid’s niece, Gloria Soco, who hitched a ride with them – were handcuffed, blindfolded and forced into separate vehicles.

These were all later recounted by Lacno, whose testimony links the military to the disappearance of Calubid, Palma, Beloy and Soco.

Calubid, whose nom de guerre was “Ka Dindo” at the time of his disappearance, was one of the trailblazers and founders of the national democratic movement in Eastern Visayas.

Calubid came from a middle peasant family from San Andres, Villareal, Samar. In the mid-60s, he stopped his studies at the Leyte Colleges in Tacloban City, when he decided to work in Manila as a collector for a financing company. This was where he met “Ka Oscar,” an organizer of the national democratic movement, then in its nascent stages.

Following Ka Oscar’s advice, Calubid went back to Tacloban City, and resumed his studies, at the same time, organized students and teachers, and founded the Samahan ng Demokratikong Kabataan. He also organized among vendors, drivers and the professionals, who were united on issues of taxes and electric charges, and were mobilized in the first mass rally in Tacloban. By the time he finished his political science degree and enrolled in law school, he was already a known student leader, and had also worked as a radio commentator.

With the declaration of Martial Law, Calubid and his comrades shifted organizing from the urban center, to the countryside, laying the foundation of the new type of national democratic revolution.

The Communist Party of the Philippines (CPP), gave tribute to Calubid in its official publication, “Ang Bayan” in 2010, which said:

“The Party recognizes the numerous contributions Ka Dindo has made especially in military work. Among these was his leading role in the formation of the first NPA units and the establishment of the first guerrilla fronts in Samar island. Many NPA units had been trained and formed, and many guerrilla fronts had been established under his leadership. He led many breakthroughs in launching tactical offensives. He had trained many military cadres, several of whom have excelled in military work. Among them were the military cadres from Samar who were deployed to Leyte, Negros and Panay and helped achieve breakthroughs in successful tactical offensives in those islands in the 1980s.”

Palma grew up in Bacolod City, Negros Occidental, the youngest of seven siblings. Her parents were from Iloilo province, but the family transferred to Bacolod, where the father, Roberto, was assigned by the American company, Mobil, as mechanic for Western Visayas.

The Palma family struggled with poverty, but the close-knit brood helped each other out, and all the children were able to reach college. In the 60s, the Palma children witnessed the nationwide strike at the Mobil company, and how the workers stood for their rights. The Palmas, like many workers’ families, joined the picketline, and revelled at the force of the workers’ unity. The union won the case, but the wily American company decided to shut down its operations. Although their father eventually lost his job, the lesson, that one must fight exploitation, made its mark in the young Palma brood.

It was Martial Law, but the mass movement was gaining ground in Negros island, as sugar workers, the urban poor joined forces with the religious sector to assert the right to land, wages and housing. At the University of Negros Occidental-Recoletos, where she majored in social work, Palma became active in the Catholic Youth Movement, joined rallies and supported the struggle of the urban poor communities.

On her third year, she decided not to finish college, and joined the underground movement.

Palma was with the communication bureau of the Negros Party committee when she met Calubid. The two fell in love, in spite of the 17-year difference, and got married in 1985. They had three children, who were cared for by Palma’s siblings, as the couple worked full-time in the underground movement.

Their children, Nuki, Jun and Bianca recalled how their parents raised them, in spite of not being physically around. The brief, but special, occasions that they spent with their parents were also the time for discussions why their family is different, why they have to live apart, and why there is a revolution.

“Be humble always. As you age, you evolve into something new. Always be a learner to life’s lessons and situations,” Jun remembered their father saying.

Bianca recalled their mother advising them to keep the family closeness. Although their parents were absent, they had the whole clan – their aunts and uncles, grandparents, and cousins – giving them care and support.

Nuki and his brother Jun also recalled Calubid telling them how individuals in society usually develop and master one or two skills throughout their lifetime. For a proletariat, however, aside from mastering one or two skills, one has to be “an ace of all cards,” and be knowledgeable in many things, because this is what the revolution requires, their father said.

Nuki once told Calubid that he was getting old, and maybe it was time for him to retire. This was when his father told him of the certainties of the future of the revolution.

“We have dedicated our lives to this, and we will die doing this,” his father answered. “The victory of the revolution is something that we, maybe not even you, will see. But it will be reaped by the grandchildren of our grandchildren,” Nuki remembered his father’s words.

Parts of this article was sourced from the book “Pagtatagpo sa Kabilang Dulo, Panitikang Testimonial ng Desaparecidos,” published in 2009 by the Families of the Desaparecidos for Justice (Desaparecidos), the Amado V. Hernandez Resource Center, in cooperation with the Taiwan Foundation for Democracy.