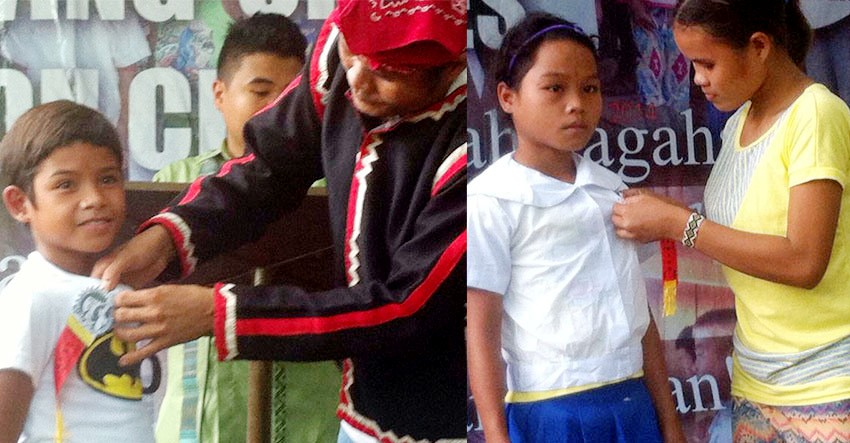 DAVAO CITY – Under the shade of a mango tree, Efren Ledon, 22, and six other new applicants of the Mindanao Interfaith Services Foundation Incoporated (Misfi) Academy, interpreted the nationalist song “Bayan Ko” (My Homeland) during the belated graduation ceremony of pupils from indigenous people (IP) in Davao del Norte.

“When I saw the children here, I was touched. I am inspired to teach them,” said Ledon.

Still on the third year of his Elementary Education course in college, Ledon said “these children in far flung areas are what Misfi is all about.”

“It is the government’s responsibility to go to them and teach them. The children and their education should be a priority,” he said.

The mango tree at the lawn area of Haran House compound of the United Church of Christ in the Philippines also shades the makeshift earth stage and seats of the pupils, their parents, school administrators and visitors.

Some pupils proudly wore their school uniforms while their parents wore their best dresses.

Mothers in their indigenous garbs marched in bare feet, while nursing children clung to their waists, sucking at their bosoms.

The pupils and their parents lined up in pairs for the entrance march, as the usual graduation march played. All the participants were beaming.

The compound is more than a hundred kilometers away from the hometown of the Manobos in Sitio Muling, Barangay Gupitan, Davao del Norte.

“We were supposed to do this in Sitio Patil but the Alamara (IP paramilitary forces) prevented us from doing this,” said Datu Mintroso Malibato, the leader of the Manobo group Karadyawan.

Malibato said the students and the residents had to travel in secret for two nights through the Mountains of Bukidnon to get to Davao City.

“The Alamara wouldn’t allow the teachers to go to the schools anymore. They threaten them, short of inflicting physical harm on them,” said Malibato.

The Army unit stationed in the area have repeatedly denied the presence of the Alamara, but reports said they have trained and armed some locals as members of the Cafgu (Citizens Armed Force Geographical Unit).

Karadyawan said the Alamara and Cafgu members are the same.

Karadyawan and support groups have observed the re-emergence of Alamara when Army units began counter-insurgency operations in the area.

Residents decried the presence of the Alamara, citing its history of criminal notoriety.

Karadyawan previously warned that the insurgency operations would only target civilians such as them and not communist guerrillas of the New People’s Army (NPA).

“Now, they have their eyes set on the schools which they claim are structures built by the NPA,” said Malibato.

He said the Alamara sees their water system, crop drier, corn mill and other improvements as “courtesy of the NPA.”

Getting to the school at Sitio Muling requires two days on foot and teachers had to pass 42 river-crossings.

Milagros Tan, Misfi administrator, said they are about to open 14 more schools.

“The requirements set by the education department are so tedious but we have to comply,” she said.

She slammed the threat of Alamara in Kapalong that has led to a de facto closure of the school.

“About 200 children were not able to resume their classes in the scheduled school opening because of this, but the government has not done its job for the right of these children to be educated,” she said.

The Save Our Schools (SOS) Network has expressed concern for the safety of the students and teachers of IP schools as “they are continuously being subjected to attacks.”

“Even the local government and the police have failed to stop the attacks and secure the schools,” said Rius Valle, spokesperson of the SOS Network.

“These are all instigated by the government’s insurgency campaign where the civilians, and even schools, have become their targets,” he said.

Army officials have, in several interviews, denied the accusations.

STTILCI administrators report that even with the “attacks,” over 70 volunteered to teach in their schools.

At the moving-up ceremony, several groups also gave their messages of support for Misfi Academy.

Moro teachers from the Misfi Academy in Carmen, North Cotabato also came to sing a song in their native tongue which they said meant “go on, press on amidst the challenges.”

A protestant pastor said, “It must be the will of God that your schools continue to serve as we see new teachers volunteering.”

The small gathering in the Haran House was simple but for Ledon, “it is one of their proudest moments.” Reposted by