As private colleges are expected to cut down its faculty, teachers will be pitted against each other, fighting for jobs in public high schools.

MANILA – Different groups of teachers, students, parents and school employees gathered to protest at Liwasang Bonifacio on May 9, Saturday calling for the suspension of the K to 12 program.

The groups warn that mass lay-offs of teaching and non-teaching personnel in college are imminent in 2016, when there will be no new batch of students for the tertiary level.

Job losses then, will be on top of the perennial problem of lack of teachers, classrooms, facilities, chairs, and textbooks, which continue to worsen every year.

“The problems besetting Philippine education are systematic, and we assert that the K to 12 Law will only worsen the persistent crises affecting education stakeholders,” the Council of Teachers and Staff of Colleges and Universities in the Philippines (Cotescup) said in a statement.

“K to 12 is the worst curriculum in the history of basic education in the country,” said ACT president Benjie Valbuena, adding that the program only promotes labor export policy.

As a solution, the government has proposed a stabilization fund for those who will be affected by the two-year lull in enrolment. But the proposal has not yet been finalized, Valbuena said.

At least 80,000 teaching and non-teaching personnel will be laid off from work when the implementation of the K to 12 program is in full swing in 2016. The added two years for senior high school (SHS) – Grades 11 and 12 — will result to zero enrolment in college in private and public universities.

College professors in private universities are most threatened, since their salaries are sourced from tuition, and the schools’ income will be surely go down.

Rita Cucio, social sciences professor in San Beda College in Manila said that at least 30 percent of the faculty will be affected if the K to 12 pushes through next school year. She said the San Beda administration is still discussing what to do to cope and has not announced any retrenchment yet.

Cucio said many professors are anxious even as the administration also hopes that K to 12 will be suspended so that they will not have to cut jobs.

“As long as the K to 12 program has not yet been suspended, there is still a possibility that we will lose our jobs. Even if the management says it does not want to lay off professors, if there will be no students who would enroll in the college department, our salaries will be affected.”

Dr. David Michael San Juan of the De La Salle University in Manila said regular professors were assured that they will not be laid off from work. However, part-time professors will be the most affected.

“Once the number of students is reduced, meaning there is no enrolment of new students, the school administration will let go of part-time professors,” San Juan said.

Jomel General, an employee of the Philippine School of Business Administration (PSBA) for more than 20 years and president of the PSBA Employees Union-Federation of Free Workers, said they, too, are still unaware of what will happen next year. If the K to 12 pushes through, he is among the non-teaching staff that will get sacked.

The administration, though, has not yet announced any retrenchment or mitigation plans, he said.

In St. Scholastica’s College (SSC) of Manila, the administration has withdrawn its initial offer of an early retirement package — in effect, retrenchment — to all professors teaching general education. This was due to the Department of Labor and Employment’s (DOLE) pronouncement that no school should lay off employees, teaching and non-teaching staff, until the K to 12 program has been fully implemented.,” said Flordeliz Abanto, Mass Communication professor in SSC.

In SSC, the first batch of retrenchment was scheduled for this year and another, in 2016.

But the professors did not take it sitting down. Last year, they joined the Coalition for K to 12 Suspension, led by the Council of Teachers and Staff of Colleges and Universities in the Philippines (Cotescup). They took their issues to the public, and held dialogues with different government agencies.

Cotescup was the first to petition the Supreme Court to suspend the K to 12 program. The SC has ordered the Department of Education (DepEd) to answer the petition.

“We call on the SC to put premium to the merits of our petition. We ask them to decide prudently and expeditiously on our petition to arrest more complications arising from a heavily defective law,” the group said.

Abanto added that SSC President Sr. Mary Frances Dizon, OSB said the school will only take steps once the K to 12 has taken effect.

Like those in San Beda, SSC professors remain worried over their security of tenure.

“There is still no written announcement that there will be no massive retrenchment. The management just gave its verbal commitment,” Abanto said.

The Cotescup asserted that the K to 12 Law, violates their Constitutional rights to labor, property, and academic freedom. “We assail the inability of education officials to present viable solutions to the labor implications of the K to 12 Law.” 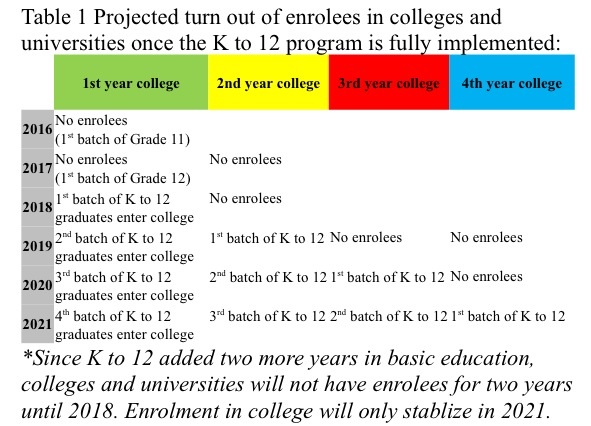 In a report, DepEd Secretary Bro. Armin Luistro, FSC said they will hire 30,000 to 41,000 high school teachers for 2016 and 2017. He said the DepEd will prioritize teaching and non-teaching staff who would be displaced in universities.

Valbuena said that to do this, the Department of Education has raised the passing score/rate required for a regular, plantilla position, from 55 percent to 75 percent.

He said this will discriminate against the newer, younger teachers, since the passing rate is based on years of teaching experience, and attendance in a required number of trainings and seminars.

“And who would have more years of teaching experience and had attended trainings and seminars, but the teachers in private schools?” Valbuena said in an interview with Bulatlat.com.

By 2016, displaced college professors can be hired to teach in SHS provided that within five years after their hiring, they will pass the Licensure Examination for Teachers (LET). Teachers in basic education are required to pass the LET under the Philippine Teachers Professionalization Act of 1994.

Valbuena said that when hired as regular, college professors will automatically attain the position of Teacher 2, even if they are not yet LET eligible. This will again have an impact on younger teachers whose promotion will be halted. Before K to 12, Valbuena said, teachers had to undergo a rigorous process before getting promoted as Teacher 2.

“This is unfair to some teachers who have worked hard for their promotion. This is not right because this will promote divisiveness among the teachers,” Valbuena said.

At the Liwasang Bonifacio protest, San Juan, who is also a convenor of Tanggol Wika, cited the temporary restraining order (TRO) granted by the Supreme Court against the Commission on Higher Education’s (Ched) Memorandum Order 20 (CMO 20) or the Revised General Education Curriculum, as the fruit of collective action.

The decision came a week after convenors of Tanggol Wika filed the petition. The CMO 20 is part of the government’s implementation of the K to 12 program.

San Juan commended the protesters saying that despite different views on different issues, they are united in one call. “But there is still a long battle ahead,” he said.

ACT Teachers Partylist Rep. Antonio Tinio and Senator Antonio Trillanes IV, who were both present in the rally, vowed to continue the fight until the K to 12 program is suspended.

San Juan also said they will file another petition against the K to 12 program before the school year 2015-2016 starts. He said that if they are united and act collectively to pressure the government to suspend the K to 12 program, there is hope.

“Our unity and diversity enhance us. We are getting bigger and our reach is getting wider. Let us all be steadfast until our calls will be heard,” Valbuena said.