“While Aquino is in power, we risk our life. He wields instruments that make the people suffer.”

MANILA – “You’re a doctor and you diagnosed someone as having a cancer, will you do nothing and just wait out the few months he has left? Chances are no, you won’t, because that is the height of irresponsibility and insensitivity.”

This is how doctors affiliated with Rx Aquino Resign Now began to explain their support to calls for the immediate resignation of President Benigno “Noynoy” Aquino III, even if some opinion-makers hesitate because Aquino has less than 15 months left before he steps down. It is not that Aquino is suffering from cancer or some kind of a fatal illness – he is depicted more as a leader foisting misery and death on Filipinos – it is about taking out his remaining months in power in which he still has command over state apparatuses and as such, he continues to put Filipinos at risk with his disastrous leadership. 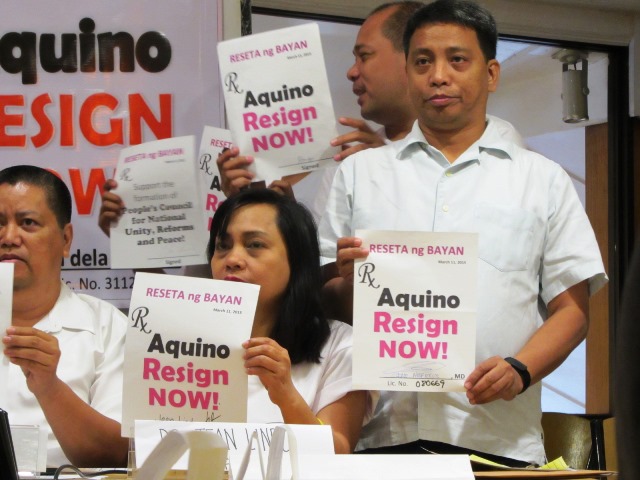 “Noynoy’s problem is not psychiatric but his insensitivity,” Dr. Gene Nisperos, vice-president of Health Alliance for Democracy (HEAD), said in a press conference in Quezon City last week.

Nisperos countered arguments being thrown against the Noynoy Out Now! campaign, such as Aquino supposedly having psychiatric problems; or Aquino supposedly not knowing what his people (KKK kaibigan, kaklase, kabarilan) have been doing. “These are fallacies being spread around to save Aquino’s skin,” said Nisperos.

After four years in power, “Aquino has been conspicuously absent in times his leadership was needed the most,” Nisperos said, citing the Luneta fiasco and supertyphoon Yolanda as prime examples.

He noted how the policies Aquino has been implementing contrasted starkly with the demands of his “boss.”

“Instead of helping the institutions that provide needed services, he is neglecting them,” Nisperos said, referring to schools and hospitals and public utilities. He said Aquino is exerting “conscious effort” NOT to hear the people. But if he is not representing the interest of the people, then he should go, Nisperos concluded.

Nisperos blasted as another big “fallacy” the idea touted by some that Aquino himself is not being corrupt. “Whether wittingly or unwittingly, he allows it. He has accountability and he defends those who have clearly done wrong. Huling huli na ipinagtatanggol pa. If you protect guilty people, you’re guilty as well,” the doctor said.

In abetting if not himself instigating corruption, Aquino’s more than four years of rule has shown him quickly defending and absolving from any wrongdoing, even before an investigation was conducted, not just his police chief friend (and suspended) Alan Purisima, who is just the latest friend caught violating the law, but also former DILG Undersecretary Rico Puno (regarding his role in the Luneta hostage crisis and his “raid” of the condo unit of former DILG Secretary Jesse Robredo, who died in a mysterious plane crash), his sister Ballsy Aquino (in the alleged commission-fraught talks about purchasing MRT coaches), and the DAP architect, Budget Sec. Butch Abad.

“While Aquino is in power, we risk our life. He wields instruments that make the people suffer,” said Joseph Carabeo M.D., of RX Aquino Resign Now! For this group, Aquino’s continuing in power also means he retains a highly influential say on who will replace him while continuing his killer economic and political policies. 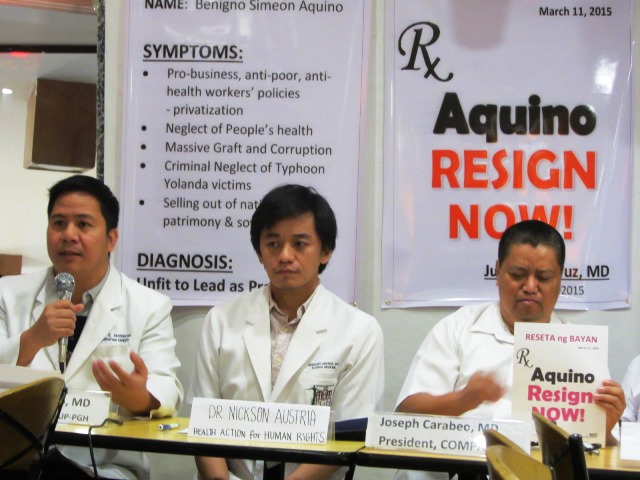 Over the past few days, many other groups aside from the health groups have discredited Aquino’s boasted “accomplishments.” The Kilusang Mayo Uno for example called his claimed growth as “jobless growth,” as they pushed for a change in government to make way for national industrialization and “genuine” land reform.

The Automated Election System Watch continues to sound the alarm over the lack of transparency and safeguards of the privately controlled, overpriced systems for holding another automated elections come 2016.

The 2015 national budget is said to be “an election budget,” with provisions for patronage politics and with President Aquino wielding control over what has been touted as the biggest pork of all.

Various groups continued also to protest the privatization and state neglect of what should be state-owned and controlled vital businesses such as public hospitals, railways, harbors, oil and power industry. As of this writing, the MRT is still a costly accident-prone public utility because of years of neglect despite billions of public funds devoted to its upkeep.

“When Noynoy was installed, there was high morale because he promised change from former President Gloria Macapagal-Arroyo, but it was dissipated by corruption issue over PDAF and DAP,” Dr. Darby Santiago of Health Alliance for Democracy said in the press conference of Rx Aquino Resign Now. As one of the doctors at the Philippine General Hospital and Paco General Hospital, he witnesses daily the pains left untreated because of gaping lack of medicines and equipment in public health under Aquino.

Santiago lamented the worsening condition of hunger and poverty. “You work for the whole day but earn less than you need to get up and work again,” he said, adding the country has given Aquino more than enough time in Malacañang.

“If Aquino has shame and delicadeza, he should resign now,” Dr. Santiago said.

Other doctors leading other organizations echoed Dr. Santiago’s call. “For our welfare, this president needs to resign,” said Dr. Nickson Austria of Health Action for Human Rights. He said Aquino as president has accountability over the thousands of people whose rights were clearly violated.

Human rights group Karapatan, in a separate statement, scoffed at Aquino’s “drama” portraying himself as a human rights victim, when, they said, as of December 2014, “he is answerable for the 226 victims of extrajudicial killings, 225 victims of frustrated killings, 26 enforced disappearances, almost 47,000 victims of forced evacuations in poor communities, 106 victims of torture, and 491 political prisoners.”

Explaining how they, as doctors and health workers, are used to meeting to discuss (medical) cases and which actions are best to resolve it, the doctors propose also the formation of a people’s council for national unity and reforms.

“So many things need to be changed,” Dr. Acosta said.

There is the need, he said, to exact accountability over the Mamasapano incident. Various groups and even the Board of Inquiry itself have all but said President Aquino has been lying about his role here while violating laws and agreements. 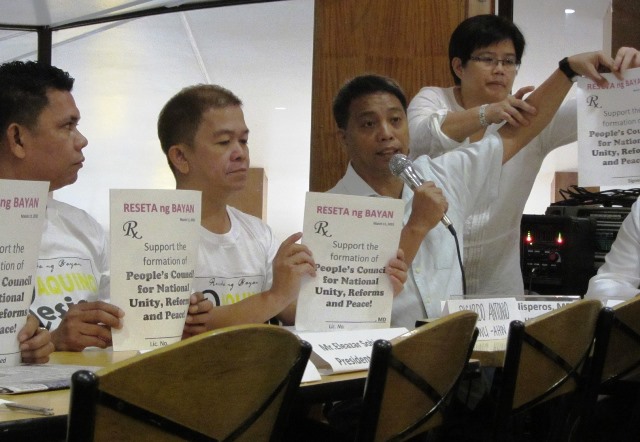 Robert Mendoza of Alliance of Health Workers shared that in the health sector, they can’t provide all needed services because of corruption and policies constricting budget for public health and transferring health services to private hands.

The group said that it should stop immediately. They believe the people’s council they propose to form to replace the Aquino leadership in the interim should start working on it.

This council will not be just be a one-man or one-woman team, the doctors said. Citing again the case discussions they hold in the medical field, they said the composition will arise from the groups most serious and sincere in seeking change. The council, they said, shall be composed of patriotic Filipinos with a track record of leadership in the people’s movement for democratic reforms, with known probity, integrity and independence.

The leaders of Rx Aquino Resign Now said they will conduct among health workers and personnel discussions to further encourage them to join and support calls for Aquino to resign.