Why is Aquino raising MRT, LRT fares when it is not needed? groups ask

“There is more than ample budget for the MRT and LRT but Malacañang wants to increase fares so that they can have discretion over the savings and turn this into a Disbursement Acceleration Program (DAP)-like pork barrel to be spread to their favourite politicians.” – Bayan Muna Rep. Neri Colmenares

MANILA – What is Malacañang doing with the people’s money? As students and youth pelted the offices of the Department of Transportation and Communication with red paint to dramatize their anger over the Transportation Secretary’s “treacherous” decision to raise train fares in Metro Manila by 50 percent to 87 percent, the issue of where the government is really spending the people’s money is being raised once more. 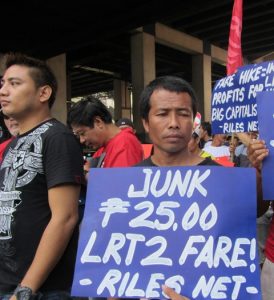 “There is more than ample budget for the MRT and LRT but Malacañang wants to increase fares so that they can have discretion over the savings and turn this into a Disbursement Acceleration Program (DAP)-like pork barrel to be spread to their favourite politicians,” Bayan Muna Rep. Neri Colmenares said in a statement a day after his group joined Bayan and other progressive organizations in petitioning the high court to stop the train fare hike.

From various studies of the financial standing of the LRT and MRT, it appears the said train systems do not really need to increase fares. Colmenares all but accused the Aquino government of deceiving the public in insisting the LRT and MRT are “losing.” The Bayan Muna Rep. cited the annual MRT and LRT revenues which both outstrip its operation expense. He said that last year, MRT earned P2.2 billion ($48.84 m) in ticket sales and spent only P1.8 billion ($39.96 m) in operations. LRT earned P2.5 billion ($55.5 m) but spent only P1.03 billion ($22.27 m) for operations.

Even if despite such earnings and expense accounts the Aquino government continues to claim the trains are losing, Colmenares emphasized that in fact, “it is the government’s task to fund mass transport.”

The government through the DOTC have spent public funds of up to P120.7 billion ($2.68 b) on the MRT for the last 10 years but until now, Colmenares said, the DOTC has yet to account for these spending given that with all these funds, “the MRT service is very dismal and still deteriorating.”

Colmenares said they will make DOTC account for the 120.7 billion ($2.68 b) given for MRT in the last ten years. He expressed hope the Supreme Court would immediately issue a TRO “to derail the fare hike and stop this injustice dead on its tracks.”

Gabriela Women’s Party Representative Luzviminda C. Ilagan, meanwhile, asked her colleagues at the House of Representatives to heed the call of the Filipino people against this “added burden to the general commuting public.”

The train fare hikes are condemned by youth group Anakbayan as “pure evil” which, side by side with privatization, satisfies only the Aquino administration “cronies” such as the Ayalas at the expense of millions of low wage-earning commuters. Vencer Crisostomo, national president of Anakbayan, accused President Aquino and DOTC Sec Abaya of being liars as well as “bagmen” for big businessmen who stand to profit from the fare hikes while millions of commuters are further squeezed. Anakbayan has picketed the gates of DOTC last Tuesday.

“The fact that the government has lied to the public and admitted that the fare hikes are set to benefit the mega-investors behind train privatization deals is enough to stop the hikes,” Crisostomo said.