“The problem with Malacañang’s proposal to allow the President to enter into P6 billion to P10 billion ($136 million to $227 million) worth of negotiated power contracts is that it is based on Energy Secretary Jericho Petilla’s mere insistence of a power shortage that is not supported by verifiable data.”

MANILA – There are a lot of things the Aquino government and Congress can do to ensure both sufficiency and affordability of supply of electricity, and it doesn’t need emergency powers to implement. In a press conference of leaders of consumer and sectoral groups under POWER (People Opposed to Unwarranted Electricity Rates) this Friday, Oct. 17, they enumerated some of it even as they questioned the premise being cited by the Energy department in rushing (or “blackmailing”) Congress into granting them emergency powers.

“The problem with Malacañang’s proposal to allow the President to enter into a P6 billion to P10 billion ($136 million to $227 million) worth of negotiated power contracts is that it is based on Energy Secretary Jericho Petilla’s mere insistence of a power shortage that is not supported by verifiable data,” POWER said in a statement. Most data available such as those from the Philippine Independent Power Producers Association (PIPPA) and National Grid Corporation (NGCP) show that instead of a looming shortage, there is buffer reserve. The Luzon grid has anywhere from 2,338 MW to 3,187 MW available during next year’s summer months.

In an interview with Bulatlat.com, a power industry executive said last month that all the government needs to do to address the usual summer’s peak demand is schedule plant shutdowns so there would always be enough energy supply. 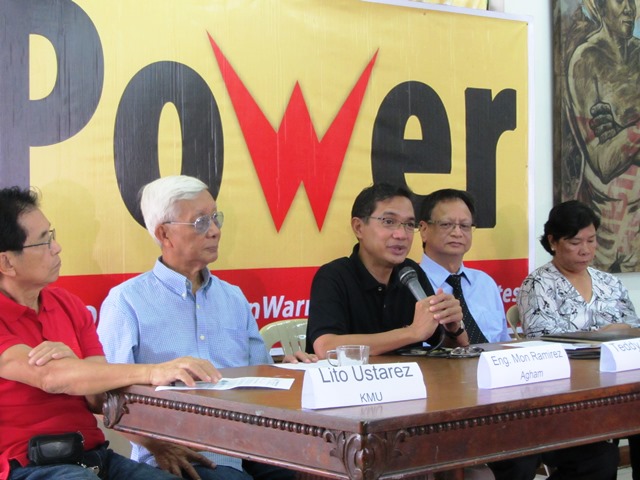 In POWER’s press conference, David Celestra Tan of MSK (Matuwid na Singil sa Kuryente) also said the government does not need emergency powers to compel independent power producers to run their plant as needed. Tan and the other POWER leaders listed other doables, which the Energy department can adopt to make available sufficient and affordable energy, without resorting to emergency powers.

How to reduce Meralco’s electricity by P3/kWh

Among the country’s distributors, Meralco has one of the largest franchise areas, as it covers Metro Manila and nearby provinces. In POWER’s press conference, the group and MSK’s David Celestra Tan discussed the following doables which, when implemented, can help Meralco’s consumers to have uninterrupted power supply at a price lower by at least P3 per kilowatt hour. The following are some of these doables:

Of the P3 that could be sliced off the price of Meralco’s electricity, P1.60 comes from savings by buying lower-priced power, Tan said. He said Meralco’s record in purchasing power shows it buys electricity at prices ranging from P3.47 to P6, and the records show Meralco bought more of the higher priced power than the lower priced. Why? Tan said Meralco is buying bigger supplies of more expensive power from its sister companies through negotiated contracts.

Instead of allowing distribution utilities like Meralco to ink negotiated contracts in secrecy, POWER and Tan of MSK asked the Aquino government to put a stop to it.

“Consolidate the power needs of all distribution utilities and then hold public biddings,” Tan suggested. This, he said, will make the power purchase process more transparent.

3. Put a stop to the practice of paying power plants even when it did not generate power

This has been allowed since former President Fidel V. Ramos used his emergency power to contract more power plants. Tan urged the government to put a stop to this practice of paying power plants even when it did not run (or did not produce energy).

4. Resolve or attend to the “total failure” of the Wholesale Electricity Spot Market (WESM)

Bayan Muna in earlier statements has called on the Energy Regulatory Commission (ERC) to submit the long overdue collusion report on the Dec. 2013 Malampaya shutdown. The progressive partylist has repeatedly pointed to the similarity of the situation during that Malampaya shutdown to the “spectre” of summer power shortage Energy Sec. Petilla is “ranting about” these days.

Since WESM’s “total system failure” last Dec. 2013 that resulted in the SC-injunctioned historical spike of Meralco’s rate early this year, WESM rules have not yet been changed until now, according to Tan.

In the last quarter of 2013, the shutdown of Malampaya gas facility coincided with simultaneous shutdowns of at least eight power plants in Luzon. No shortage was declared, but Meralco purchased one of the highest priced power sources in history and tried to pass it on to consumers. But it was revealed that what happened was a manipulation of WESM prices.

One of the charges in every Meralco consumer’s bill is systems loss.

Another way to bring down the price of electricity particularly of the biggest distributor, Meralco, is to promote transparency in its setting of rate of systems loss it charges to its consumers, said Tan during the POWER press conference. These days the rate is at 8.5%, but Tan said there were times it went as high 15%. “This is too much,” Tan said.

6. Stop Meralco from charging its costumers the cost even of its projected investments

Aside from charging customers so Meralco can derive its expected rate of return on its investments, the government has allowed Meralco to charge its customers the cost even of projected investments.

Based on Tan’s discussion at the POWER press conference, the price of Meralco’s electricity rates can be slashed if the government compels Meralco not to add to the consumers’ bill both the cost of its current and projected investments. Since Meralco did that, Tan said the consumers’ bill rose by P0.40. If Meralco continued with that, Tan said, it is charging consumers both its profit and projected investments.

As for the allowed RORB (return on rate base), Bagong Alyansang Makabayan and other progressive groups have also criticized the government for letting companies like Meralco enjoy excessively high RORB.

Power is primarily used for production. From the POWER press conference this Friday, the inclusion of power in items slapped with Value-Added Tax was also condemned. Tan said it is illegal based on the EPIRA, which provides that power is not to be taxed. Power began to be taxed in 2004 to add revenue sources for the government.

This, said Tan, calls for the need to “review, reduce and phase-out VAT.”

The call covers Malampaya gas, too. “It should not be taxed (VAT) since the government is already earning royalties out of Malampaya,” Tan said.

These are some of the bases for calling for a P3 slash in Meralco rates. But based on the discussion in POWER’s press conference, for these to happen, Meralco’s cooperation is needed, and it has to treat the buying and selling of power not as a profit-led business but for public service.

As for the DOE’s oft-repeated ”spectre” of power shortage, POWER suggested the following steps, rather than granting the President emergency powers:

1. Ask the operators of Malampaya and Pagbilao to re-schedule their shutdowns;
2. Require operators of existing plants to deliver on their dependable capacities from March to May 2015 (these are the periods when Petilla warned there would be “shortages;”
3. Ensure that government-owned plants are able to run at their full capacities at that time;
4. Prepare an aggressive energy saving and efficiency program for the same period;
5. Tap the reserve capacities of the public and private sectors at cost.

In the medium to long term, POWER demands the repeal of Electric Power Industry Reform Act (EPIRA) and give back to the National Power Corporation the authority and capability to construct and run power generating plants. The consumer groups suggest using more indigenous and renewable energy sources.