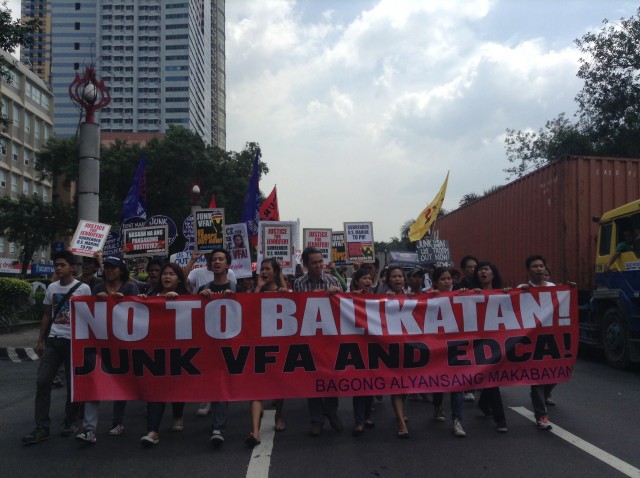 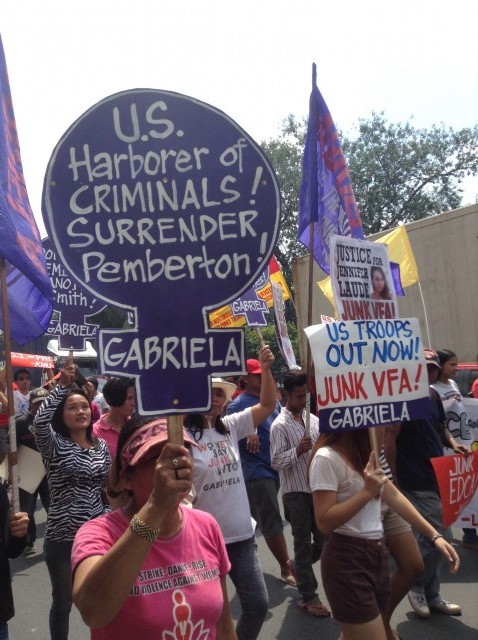 MANILA — Members of progressive groups held a protest action on Oct. 16 in front of the US embassy in Manila to demand anew the scrapping of military agreements with the US, in light of the killing of Filipina transgender Jennifer Laude.

“In the interest of justice, and in upholding our sovereignty, the Philippine government must assert jurisdiction and custody over Pemberton. The United States should stop thinking that it is still 1902, that it can violate our sovereignty and dignity with impunity,” Renato Reyes, secretary general of Bayan, said.

Laude was found dead in a hotel in Olongapo City on Oct. 11. An eyewitness has identified US Marine Private First Class Joseph Scott Pemberton of the 2nd Battalion of the 9th Marine as the person last seen with Laude.

On Oct. 15, the Olongapo City Philippine National Police and the Laude family filed murder charges, but Pemberton remains in US custody on board the USS Peleliu at Subic Bay port.

Reyes said the refusal of the US government to turn over Pemberton “should be considered a ground for the termination of the VFA (Visiting Forces Agreement).”

The termination of the VFA, he added, would also render the Enhanced Defense Cooperation Agreement (EDCA) inoperable as US troops could no longer conduct activities within Philippine territory.

“The murder of Jennifer Laude and the rape of ‘Nicole’ are not the only incidents committed by the United States soldiers stationed here in the Philippines. With the Enhanced Defense Cooperation Agreement, the ‘Nicole’ and the Laude cases will not be the last,” Cristina Palabay, secretary general of Karapatan, said.

Palabay said that since the signing of EDCA would pave the way for the increased presence of US troops in the country, crimes against the Filipinos “are most likely to happen in a larger and systematic scope, and with impunity.”