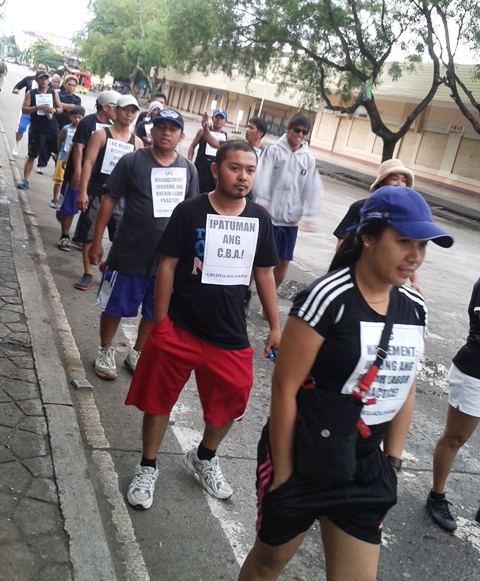 DAVAO CITY — In preparation for their collective bargaining agreement (CBA) negotiations to be held September, rank and file workers of LBC Davao held a “protest run” and urged their management to discontinue its unfair labor practices. About 30 members of LBC Davao Employees Union (LBDCDEU-ADLO-KMU) ran the length of this city’s Freedom Park toward C.M. Recto St. wearing black shirts and protest signs.

The union claims the LBC management is not complying with CBA provisions related to benefits and regularization of employees. The union also hit the management’s “tactics” of quelling the union’s campaign to end the company’s “unfair sanctions policy” and its persistent efforts to discredit union president Butch Gajudo who has been slapped with numerous complaints.

Butch Gajudo, president of LBCDEU-ADLO-KMU, says they are sending a clear message to the LBC management that the workers are united and ready to protect their rights under the law. 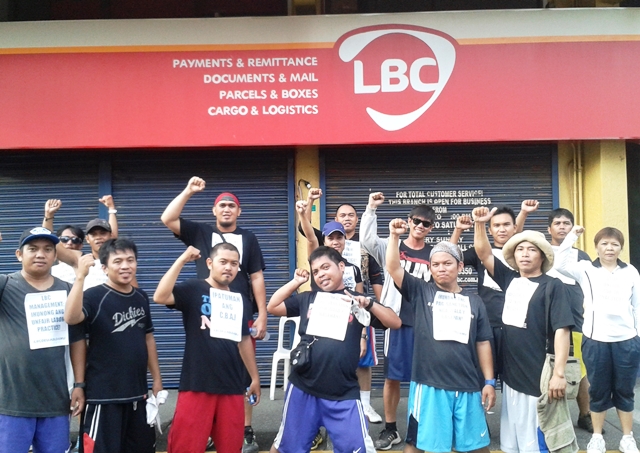 “We are also calling on management to respect the law by respecting our union, our leaders, and to stop all acts of harassment against us,” Gajudo said.

The regional chapter of labor center Kilusang Mayo Uno in Southern Mindanao expressed support to LBC union’s campaign. Romualdo Basilio, secretary general of KMU Southern Mindanao, said that everywhere in the country today, genuine trade unions and union leaders are targets of attacks and unfair labor practice. He lamented what he calls as “a climate that is repressive to genuine trade unionism.”

Aside from what the union and its leaders in LBC have complained about, 24 union leaders of electronic firm NXP in Laguna were illegally dismissed in the middle of its negotiations for a new collective bargaining agreement. They are now fighting for reinstatement.

In Davao, Basilio said union stalwarts Carl Anthony Olalo and the Berdera brothers of MPSI have also been illegally dismissed. Other leaders are being slapped with trumped-up murder charges such as the Maragusan DOLE Stanfilco union leaders, Artemio Robilla and Danilo Delegencia. Unionists are also “red-baited and maliciously linked” to the communist movement such as in the case of the RMN Davao Employees Union, Basilio said.

In a statement, the KMU Southern Mindanao linked the attacks on unionists to government’s Oplan Bayanihan. It said this supposed counter-insurgency program explains why in Southern Mindanao, elements of the military and intelligence have been documented interfering in labor disputes, certification elections and other workers’ activities.

“There is increasing repression of trade unions nationwide, especially of unions who are steadfast in supporting workers and unwilling to bend their principles to submit to fake “industrial peace” where the welfare of capitalists are prioritized over that of the workers,” said Basilio. He called on all workers to put a stop to this repression. Basilio at the same time lauded the actions of LBC workers as they prepare to negotiate with their employers for a new CBA.