MANILA — Indigenous peoples groups called on the government to “disarm and disband” the tribal paramilitary group called Alamara, saying that the “fanatic and vigilante group” has been committing serious human rights violations, along with the military, in Kapalong and Talaingod in Davao del Norte.

Human rights group Karapatan has documented cases of hamletting, illegal arrests, military encampment in schools and churches and destruction of properties that were committed by soldiers of the 60th Infantry Battalion. Among the victims were children who were used by soldiers as guides in their operations.

Karapatan said the ongoing military operations were meant to clear the area for the entry of the mining firm SMI-Xstrata in Kapalong. 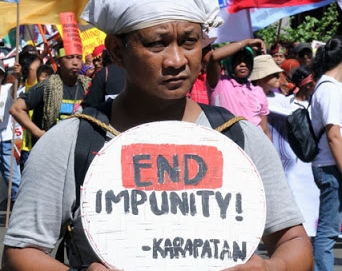 “Alamara operates in the hinterlands, bringing sharp bows and spears, M14, M16 and other high-powered rifles given and supported by the Armed Forces of the Philippines,” said Isidro Indao, spokesperson of the Pasakkaday Salugpongan Kalimuddan-Confederation of Lumad Organization in Southern Mindanao Region (Pasaka), in a joint press statement with Karapatan-Southern Mindanao and other Lumad groups.

Another Lumad leader, Datu Mintroso Malibato of Karadyawan feared that Alamara targets not only New People’s Army rebels, but also civilians in the community.

Suazo said the operations of Alamara, which is headed by Datu Laris Masaloon, shows how indigenous peoples are placed at the “forefront in the counter-insurgency program Oplan Bayanihan and for clearing ancestral domain areas for state’s economic plunder and interests of foreign large-scale mining and expansion of monocrop plantation.”

Palabay said that in July, soldiers of the 60th IB had been “hamletting” Gupitan village in Kapalong, and the atrocities are piling up.

“On July 18, soldiers began to encamp in a school and a church in Sitio Kapatagan, Brgy. Gupitan, Kapalong, Davao del Norte. Elements of the 60th IB ransacked the house of Purok leader Mario Liban and took his stock of rice,” the Karapatan statement said.

“The soldiers imposed curfew hours, allowing residents to get out of the community from 7 to 11 AM only. This restrained the farmers to tend their fields, disrupting their livelihood,” Palabay said.

On July 29, soldiers terrorized the residents of sitio Kapatagan as they lined them up and threatened to strafe them in retaliation to the NPA, who reportedly ambushed a group of 60th that day. On July 30, soldiers forced some children from the villages of Mangkay and Kapatagan to accompany them as guides.

Pasaka spokesperson Indao said the military “exploited the vulnerabilities of indigenous people” in forming paramilitary units like Alamara. He said the AFP “bastardized” the indigenous peoples’ culture by using these armed groups as “pawns for counter-insurgency campaigns.”

Indao said that Alamara was organized in 2002 in Marilog and Paquibato District, Davao City by Brig. Gen. Felipe Berroya, former commander of the 701st Brigade who was replaced by former 73rd Colonel Eduardo del Rosario.

“This is a clear indication of Oplan Bayanihan’s dirty tactics in using Lumads as baits and pawns in military operations. The Lumads in Mindanao are struggling to defend our ancestral domain and are striving for our right to self-determination,” said Kalumaran’s Capuyan.

Meanwhile, the Children’s Rehabilitation Center, in another press release, called for the pullout of military troops in the area, as they condemned the AFP for using civilians, specially, children as guides in their operations.

“As commander in chief of the AFP, we are demanding BS Aquino III to respect the rights and welfare of children through the immediate pull out of military troops in schools and communities and holding the military officers involved in the cases of children’s rights and human rights violations accountable,” said Jacquiline Ruiz, CRC executive director.